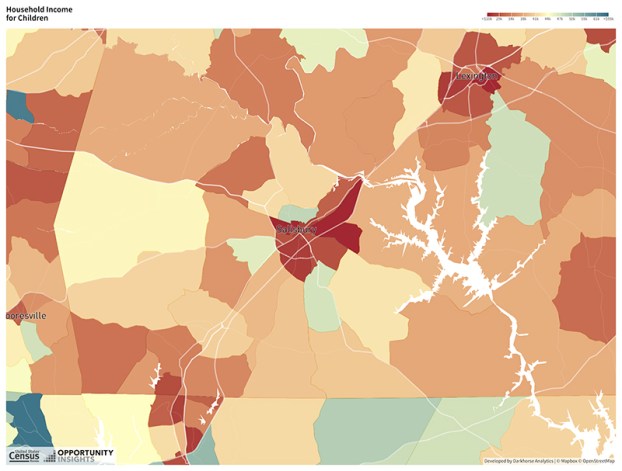 Josh Bergeron: Location matters in a child’s chances for success

Whether it’s a few city blocks or the other side of the street, where a child grows up can affect his or her chances for success in life.

And an insightful, national data mapping project released last year provides a look at how well children are likely to do in adulthood depending on the census tract in which they grew up.

Adults who grew up on the south side of the railroad tracks that run along Long Street in Salisbury and East Spencer, for example, live in households with lower incomes than those to the north.

Called the Opportunity Atlas, the project is a collaboration between Ivy League researchers at Harvard and Brown universities and the U.S. Census Bureau. It was constructed with data on 20 million Americans who are now in their mid-30s. Its findings report economic outcomes by median income for each census tract.

The map appears to default to children who grow up in low-income households, but I chose to arrange the map with data from all incomes because people can fall down the economic ladder, too.

Adults who grew up in the West End tract, for example, have median household incomes of $21,000. That’s compared to $48,000 for children in the tract to the north.

Naturally, children’s lives aren’t confined to a census tract. A family with children may move elsewhere in Rowan County or to another community entirely. The project accounted for that with data being weighted based on how much time one child spent in the particular area.

But, there are other factors at play in determining a child’s chances for earning a good wage than simply the location in which he or she lives. Parents with the resources to help their adult son or daughter in a time of crisis — a spare car when the son’s or daughter’s breaks down — makes a big difference.

Race can make a difference, too.

With a color gradient ranging from dark red for the lowest-earning adults and deep blues for the highest earners, the Opportunity Atlas shows Rowan County’s census tracts are more like that of Davidson County than our southern neighbors — Cabarrus and Stanly counties. Cabarrus County, for example, benefits from being the location of some Charlotte suburbs. But even Davidson County’s northern census tracts — near Winston-Salem and Greensboro — are a deeper hue of blue than any of Rowan’s for all income levels and among all races.

So, while Rowan County certainly doesn’t see the deepest hues of reds — the lowest income levels — in the state, the Opportunity Atlas appears to show adults who grew up closer to the outskirts of Charlotte and the Piedmont Triad live in households with higher median incomes than those from Rowan.

Improving the chances of success for children of all backgrounds who grow up in Rowan will require diligent work by our school system, elected and appointed leaders and community institutions. The good news is that our community leaders, from the school system to nonprofits, have begun or are beginning the task of meeting that challenge.

To explore the map, visit opportunityatlas.org. It’s a fascinating image of our children’s chances of climbing the income ladder.