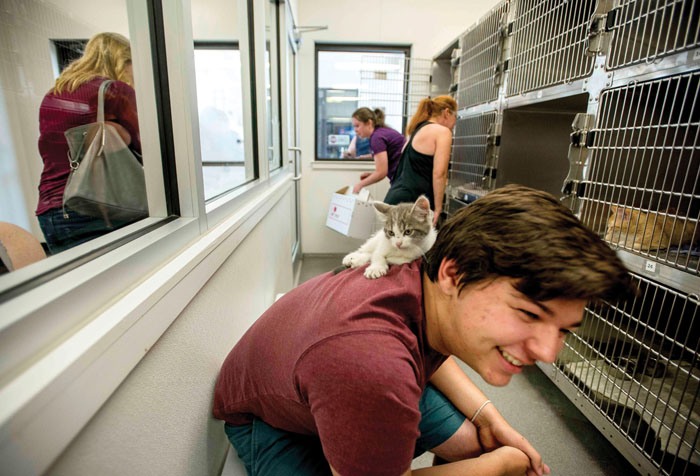 Michael Graham waits with a young kitten that he is planning to adopt at a Rowan County Animal Shelter adoption special. Jon C. Lakey/Salisbury Post

Local governments looking to create a world-class, public animal shelter need to look no further than Rowan County for tips.

The Rowan County Animal Shelter, despite some difficult moments in its recent past, has run a master class in how to reduce the number of cats and dogs euthanized and, in turn, save the lives of our furry friends. That’s evident in the fact that it didn’t euthanize a single adoptable cat or dog in 2018. As reporter Andie Foley wrote in Wednesday’s Salisbury Post (“In 2018 shelter didn’t euthanize any of its adoptable cats or dogs”) it’s the third-straight year that all adoptable dogs have been matched with a home and the first that the same is true for cats.

But, as Rowan County commissioners and staff would surely say, the presence of volunteers is a major factor in the encouraging trend.

“Many folks outside of the paid staff also work tirelessly to save these animals lives,” he said. “That means bringing them into new homes fast enough so that we don’t overfill the space that we have available at the shelter.”

Rowan County has also been fortunate to receive donations from outside groups and individuals that have led the shelter to expand its footprint and improve its facilities.

But, as Pendergrass also noted, Rowan County should not assume that the trend will continue. Importantly, county government must continue making it easy for rescue groups to save animals. Without their help, the shelter would be full on a more frequent basis and the euthanasia rate would rise. Perhaps it wouldn’t increase to the rates seen eight years ago — when 5,240 of the 6,863 animals brought into the shelter were euthanized —  but the hard work of rescue groups and county staff could certainly slip away.

Last year, only 203 of the 5,527 animals brought into the shelter were euthanized. Those 203 animals were either severely ill, severely injured or had behavioral issues that made them unfit for adoption. In 2017, there were only 238 total animals euthanized.

As Rowan has for several years, our animal shelter is setting the example for facilities across North Carolina and our elected and appointed officials in county government must work to keep it that way.