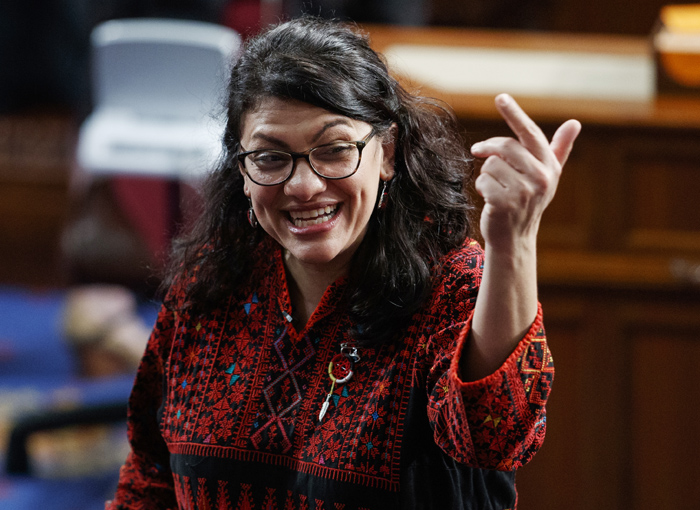 Rep. Rashida Tlaib of Michigan waves to supporters on the House floor before being sworn in. Carolyn Kaster/Associated Press

“I” words are inundating Washington. President Trump insists his border wall would impede an invasion of illegal immigrants who injure innocents. Democrats say Trump indulges an idiotic idea to instigate an impasse and incite impassioned illusions.

But the most incendiary “I” word is clearly “impeachment,” which flared into prominence when Rep. Rashida Tlaib, a freshman from Michigan, pledged to supporters that House Democrats would “impeach the (expletive)” in the White House.

Her sentiment — if not her language — might have been popular with Democratic loyalists, but party leaders were appalled at her promise — and with good reason. Democrats would be making a huge mistake, and playing right into Trump’s hands, if they use their new power in the House to push for impeachment now, without a clear and compelling case that could command broad bipartisan support.

Trump’s single biggest vulnerability is his impulsive and reckless temperament, which repels even many loyal Republicans. Impeachment proceedings without a rock-solid foundation would tarnish the Democrats with a similar reputation for unreliable instability.

Trump gleefully seized on Tlaib’s outburst, calling her “disgraceful” and “highly disrespectful to the United States of America.” See, he was telling his core supporters, the system really is rigged against us, and the Washington insiders want to steal the election we won fair and square.

Tlaib’s colleague, Michigan Democrat Dan Kildee, was on target in calling her comments “obviously not helpful” and adding, “This fuels a narrative the Republicans will use.”

Instead of mimicking Trump, the Democrats would be better off providing a stark contrast with this improvident president. Be calm when he’s crazy, factual when he’s fabricating, reasonable when he’s irrational. And use those defining differences to challenge him at the ballot box in 2020, a far more sensible way to remove him from power than impeachment.

Nancy Pelosi, the new Democratic speaker, understands the dangers here and is resisting the demands from the red-hots in her caucus. “Impeachment is a very divisive approach to take, and we shouldn’t take it without the facts,” she said on MSNBC.

“Facts” is the key word here. Trump is the Prince of Prevarication — with 7,645 false or misleading statements by the end of 2018, according to The Washington Post — so the Democrats must be the exact opposite, rooting their decisions in a rigorous devotion to reality.

Rep. Jerry Nadler of New York, the new chairman of the House Judiciary Committee, which would handle any impeachment effort, advises Democrats to hold their fire until special counsel Robert Mueller issues his report on Trump’s actions during and after the campaign. “We have to get the facts,” he stressed on CNN. “We will see where the facts lead. Maybe that will lead to impeachment. Maybe it won’t. It is much too early.”

But the pressures are growing on Democratic leaders to act quickly — and rashly. Two House members have already filed articles of impeachment, and one of them, Brad Sherman of California, insists, “Impeachment is on the table. You can’t take it off the table.”

History teaches, however, that caution is a far better course. It took more than two years after the Watergate break-in to build a case for impeaching President Nixon, and most Republicans joined the effort only after White House tapes documented vividly — and irrefutably — the president’s complicity in obstructing justice.

When House Republicans launched impeachment proceedings against Bill Clinton for lying about his sex life, the case was so flimsy that the whole vendetta backfired, boosting Clinton’s approval ratings, undermining Republicans in the 1998 elections and forcing Speaker Newt Gingrich to resign.

“I think we mishandled the (Clinton) investigation,” Gingrich recently told Washington Examiner columnist Byron York. “We should have been calmer and slower and allowed the country to talk to itself before we reached judgment.”

Moreover, while Rep. Tlaib is cheered on by left-wing activists and opinion mongers, she hardly speaks for the country’s mainstream. A Quinnipiac poll last month asked voters to name their “top priorities” for the coming Congress. Only 8 percent of the total — and only 15 percent of all Democrats — picked impeachment.

The “I” word that should guide Democrats right now is information, not impeachment. As Nadler says, “See where the facts lead.” Only then is a defensible decision on the next step possible.

Quotes of the week: ‘I don’t really understand it’