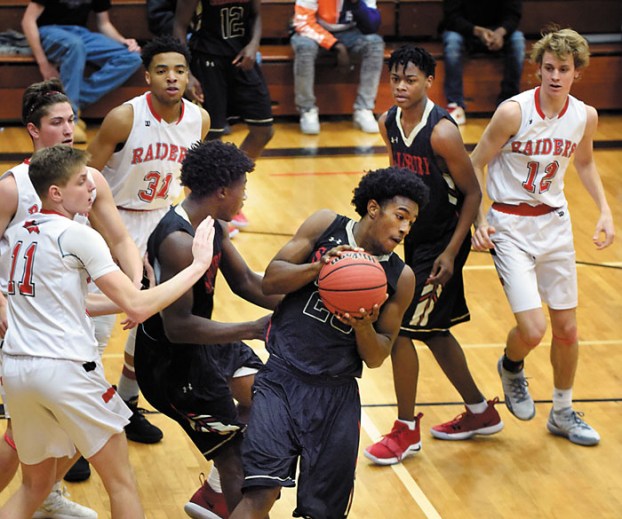 Salisbury's Jabril Norman (23) with the ball. ... Photo by Wayne Hinshaw, for the Salisbury Post 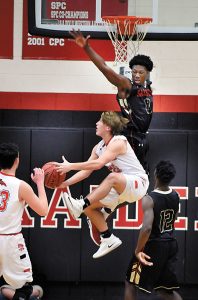 LANDIS — It took a locker room full of heavy hearts for Salisbury’s boys to bust out of an early-January funk on Friday.

The Hornets stormed past host South Rowan, 82-48, to snap a two-game skid — and they did it without head coach Bryan Withers, whose father passed away on Thursday.

“We got together and talked about how we were going to move forward,” acting coach Dominique Bates said. “His dad’s name was Henry Withers, so we all had ‘HW’ marked on our hands. Tonight was not about anybody but him. We took everybody else out of the equation — the players, the coaches, everybody — and did this for him.”

Salisbury (9-5, 7-2 CCC) reached the midpoint of its conference season with mixed emotions.

“We came out with some hype,” said senior guard Raheim Walker. “Our head coach lost his father and we wanted to make him proud. I think he would say we played an awesome game.”

It was hard argue with that logic. Salisbury received first-quarter 3-pointers from Jacquez Smith, Cam Gill and Tre Carlton and raced to a 19-7 head start.

“Their half-court offense isn’t what hurt us,” said South’s Andrew Jones. “Most of their points came off the press and on breakaways. We didn’t make good passes. We were sloppy with the ball, sloppy with the dribble. We just couldn’t get anything running on offense — and they were making shots.”

The loss was the 11th straight for the Raiders (1-12, 1-6), winless since topping East Davidson last Nov. 30. Despite some promising moments, coach Andre McCain said South is still trying to connect the dots.

“We’re still in the process of growing as a team,” he said. “At times we played good half-court defense. It’s gotten better but we just have to rebound and take better care of the ball. That’s what it all boils down to.”

Salisbury’s lead grew to 33-16 by halftime, thanks to Walker’s last second layup. He finished with 17 points for the second straight game.

“Our coach is always saying we need a leader,” he said. “Somebody has to step up and bring the boys together.”

Bates said Walker provided some sandpaper for a team that badly needed it. “He came to us and said he wanted to be a leader on this team,” Bates said. “Ever since then, he’s gotten better in practice and in games. Tonight he got his feet set, he took quality shots and he took his time to make those shots.”

Jones and Jarron Hines each netted 12 points for South. The Raiders trailed by 25 after three periods and by as much as 82-41 when Salisbury’s Kevin Chawlk drained a 3-ball from the right side with 1:10 remaining.

“This just shows that we’re learning how to fight through adversity,” Bates said. “It shows the character of our team. You have a coach out because his father passed and this is how we came to play.”

NOTES: Salisbury improved to 4-1 on the road. … Both teams break for exams next week and return to CCC action on Friday. South visits East Davidson and Salisbury hosts Thomasville.