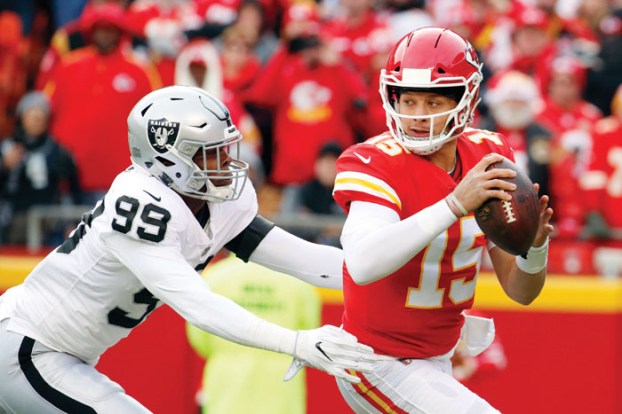 FILE - In this Sunday, Dec. 30, 2018 file photo, Kansas City Chiefs quarterback Patrick Mahomes (15) breaks a tackle-attempt by Oakland Raiders defensive end Arden Key (99) during the first half of an NFL football game in Kansas City, Mo.. For the first time in a decade, the top seed in the AFC playoffs goes to a team not led by Tom Brady or Peyton Manning. The Chiefs haven't had a true franchise QB since Len Dawson led the Chiefs to their only Super Bowl title. But after trading up to select Mahomes in the first round in 2017, then letting him learn the ropes under Alex Smith, Mahomes responded with one of the best seasons in NFL history for a first-year starter. (AP Photo/Charlie Riedel, File) 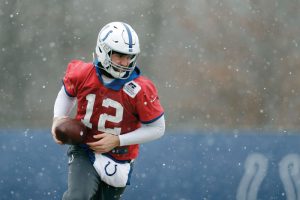 It doesn’t bother him. The Colts tight end played in plenty of cold games in the NFC North.

“You get past it once you get out there,” said Ebron, who started his career with the Detroit Lions and remembers frigid games in Green Bay and Chicago. “The worst is the TV timeouts. Once that’s over you will warm back up, but other than that it should be fun. Snow, whatever — I love snow games.”

Even if the cold, wet weather puts a damper on two star-studded offenses.

Most of the attention this week has been on the quarterback showdown between the Chiefs’ Patrick Mahomes and the Colts’ Andrew Luck, and rightfully so. Mahomes shattered records by the dozen this year, throwing for more than 5,000 yards and 50 touchdowns, while Luck tossed 39 touchdown passes while taking the Colts from a 1-5 start to the second weekend of the playoffs.

But neither quarterback would have posted such gaudy numbers had he not had a plethora of weapons at his disposal, along with creative offensive minds to design plays to get him the ball.

Chiefs speedster Tyreek Hill set a franchise record with 1,479 yards receiving this year, pulled in 12 touchdown passes and had a league-leading 22 catches of at least 25 yards. Five times he had plays of at least 50 yards, including a 91-yard punt return touchdown against the Chargers in Week 1.

Hill should have his top running mate back, too. Sammy Watkins practiced this week after missing a handful of games with a foot injury, potentially giving Kansas City its No. 2 wide receiver again.

Then there’s Travis Kelce, the All-Pro tight end, whose value comes both as a blocker and a dangerous downfield target. Kelce had 103 catches for 1,336 yards this season, briefly setting the NFL record for a tight end, and has caught at least one pass in 79 consecutive games.

“I have a big advantage here that I have a lot of great teammates that can make a lot of plays. I don’t have to try to do too much,” Mahomes said. “Just get the ball out of my hands. Get it to Tyreek, get it to Kelce, get it to all these guys who can make plays and let them do what they have been doing all season long. That’s the biggest thing, not trying to do too much.”

Especially considering what they’ve done all season has been good enough.

“I mean, just their weapons — they’ve got several All-Pro players. They have a lot of good players that didn’t get that recognition,” Colts defensive coordinator Matt Eberflus said. “There’s a lot of skill on that side of the ball. The scheme is a little bit unique, too, in terms of what they do and how they do it. It’s going to be a big challenge.”

It’s not unlike the challenge the Indianapolis offense presents to the Chiefs, who have been ferocious at rushing the passer but have struggled in just about every other aspect.

T.Y. Hilton shredded the Chiefs defense with 13 catches for 224 yards and two touchdowns during their 2014 playoff game, when the Colts rallied from a 38-10 second-half deficit. He had 76 catches for 1,270 yards and six touchdowns in another Pro Bowl-caliber season.

And much like the Chiefs, the Colts have one of the league’s most versatile and dangerous tight ends in Eric Ebron. He had 13 touchdown catches during the regular season, trailing only the Steelers’ Antonio Brown for the league lead, and added another in the Colts’ playoff win in Houston.

Making it all work? An offensive line that allowed just 18 sacks this season.

“Based on the numbers, it’s going to be very challenging,” Chiefs defensive coordinator Bob Sutton said. “It’s like anything, we will have our chances. We have to take advantage of it.”

The person spoke to the AP on condition of anonymity because the team had not yet announced the hiring.

Gase was 23-26 in three years with Miami, including a playoff game in the 2016 season, before being fired last week. It turns out he’ll remain in the division, and face the Dolphins twice every regular season as a rival head coach.

Gase replaces Todd Bowles, who was fired after he went 24-40 in four seasons and no playoff appearances. He’s the Jets’ first hire with previous full-time NFL head coaching experience since Bill Parcells’ three-year tenure from 1997-99.

The 40-year-old Gase is also the first offensive-focused coach since Rich Kotite in 1996.

Regarded as one of the league’s top young offensive minds, he’ll be tasked with furthering the development of quarterback Sam Darnold and helping New York snap an eight-year postseason drought.

While he had control over personnel in Miami, Gase will work closely in New York with general manager Mike Maccagnan, who was retained by team chairman and CEO Christopher Johnson, to put together a competitive roster around Darnold. The Jets are expected to have around $100 million in salary cap space this offseason, and will be very active in free agency.

Those factors combined, Johnson insisted leading into the team’s search, made the Jets an attractive spot for a head coach to land.

“If you can make it here, you’re a freakin’ legend,” Johnson said. “That counts for something.”

Gase will get his shot to do just that.

He began his coaching career as a graduate assistant at LSU in 2000 under Nick Saban before becoming a recruiting assistant for the Tigers for two years. Gase’s first NFL job came in 2003 under Steve Mariucci in Detroit, where he worked his way up to quarterbacks coach in five years with the Lions. He also worked for Rod Marinelli and Mike Martz in Detroit.

Gase followed Martz to San Francisco in 2008 before heading to Denver the following season. He worked as the Broncos’ wide receivers coach for two years before becoming the quarterbacks coach — where he worked closely with Manning — and was promoted to offensive coordinator by coach John Fox in 2013 and Denver’s offense set several league records during Gase’s two seasons calling the plays.

Fox brought Gase along with him to Chicago in 2015 as his offensive coordinator. Seen as a rising star in the league, he was hired by the Dolphins as their head coach the following season.

Gase had a promising debut in Miami, going 10-6 in his first season and leading the Dolphins to their first playoff appearance since 2008. But the team struggled the following year, going 6-10 with quarterback Ryan Tannehill sidelined all season following knee surgery.

Gase was fired after this season as part of an organizational shake-up after the Dolphins finished 7-9 and missed the playoffs for the 15th time in 17 years. There were also questions about whether Gase had lost the support of some players.

Miami ranked 31st in the NFL in offense, a franchise worst, and 29th in defense, allowing a franchise-record 6,257 yards this season.

Gase’s Dolphins were particularly good in one-score games, going 7-1 in those situations this season and 20-6 in three years. Their record in games decided by more than one score was 3-20, including 0-8 this season. Miami also lost its last seven games on the road.

He’ll try to change his fortunes — as well as those of the Jets — with a new opportunity.

ESPN reported that Darnold spoke with Gase on FaceTime on Monday night, and the two clicked. It also reported that Manning called Johnson Tuesday night to provide a sparkling reference for Gase.

The hiring was met with some trepidation from frustrated Jets fans, many of whom were pulling for McCarthy, Monken or Rhule to be hired to turn the franchise around and end a Super Bowl drought that’s 50 years and counting.

The franchise’s hope is that the combination of Gase and Darnold will be able to get there someday soon.

Chargers’ defensive goal vs. Patriots: Get pressure on Brady