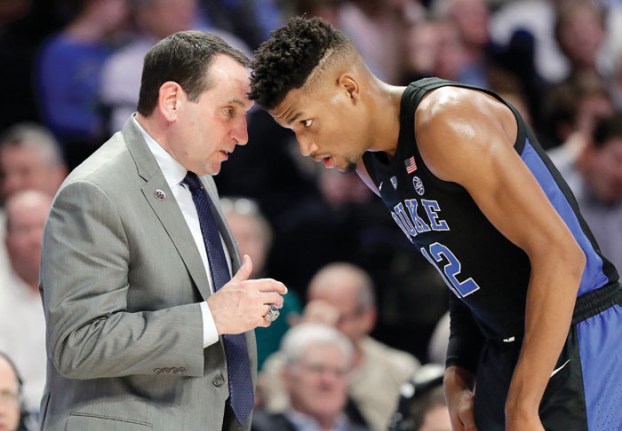 No. 1 Duke visits No. 13 FSU to headline ACC weekend slate 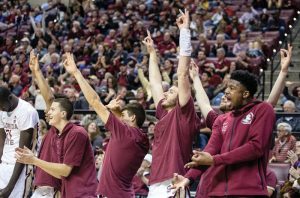 The Florida State bench reacts to a 3-point shot during the second half of the team’s NCAA college basketball game against Miami in Tallahassee, Fla., Wednesday, Jan. 9, 2019. Florida State won 68-62. (AP Photo/Mark Wallheiser)

By AARON BEARD, AP Basketball Writer
A look at the upcoming week around the Atlantic Coast Conference:
GAME OF THE WEEKEND
No. 1 Duke at No. 13 Florida State. The Blue Devils (13-1, 2-0 ACC) took their high-flying act on the road for the first time Tuesday and had little trouble at Wake Forest. Things should be tougher Saturday when they head south to visit the Seminoles (13-2, 1-1). Duke’s scheduling had become a topic after an AP Top 25 poll voter opted against putting the Blue Devils on his ballot until they (and a few other schools) played a true road game. Coach Mike Krzyzewski defended his scheduling approach after the Wake Forest win , noting he wants to prepare his team for March by playing marquee neutral-court games before league play — something Duke did against Kentucky (win), Auburn (win), Gonzaga (loss) and Texas Tech (win). “Come on, man,” Krzyzewski said. “We come up with a top-10 schedule every year.” As for Leonard Hamilton’s Seminoles, their only losses have come against fourth-ranked Virginia in last weekend’s league opener and reigning national champion Villanova in November .
LOOKING AHEAD
Last year Virginia Tech went on the road and handed Virginia its only loss to an ACC opponent in overtime . Now it’s a top-10 matchup. The ninth-ranked Hokies (14-1, 3-0) have won nine straight games and will have the weekend to rest before Tuesday’s trip to Charlottesville, while the Cavaliers (14-0, 2-0) first must visit Clemson on Saturday. Both teams are highly ranked in KenPom’s adjusted efficiency statistics: Virginia was fifth in offense (117.9 points per 100 possessions) and third in defense (86.6), while Virginia Tech was eighth in offense (116.9) and 21st in defense (93.2) after Wednesday’s scheduled games.
PLAYER TO WATCH
Boston College’s Ky Bowman is having a big year for the Eagles after high-scoring guard Jerome Robinson left early for the NBA. The 6-foot-1 junior is averaging 20.0 points, 7.4 rebounds and 3.5 assists entering Saturday’s game at Notre Dame. He also had a career-high 44 points against Hartford on Dec. 31.
INSIDE THE NUMBERS
Turnovers are becoming a problem for North Carolina, even in wins. The 12th-ranked Tar Heels won at No. 15 North Carolina State on Tuesday despite committing 23 turnovers, which matched a season-high set in the December win against Gonzaga . Before those two games, UNC hadn’t won a game with 20-plus turnovers since January 2015.
ON THE WOMEN’S SIDE
Sue Semrau’s Florida State team has found some momentum. The No. 22 Seminoles (14-1, 2-0) have won 10 straight since losing to LSU in November to climb into this week’s AP Top 25. And the two league victories have come in close finishes on the road: a 63-61 win at Virginia and a 64-63 win at UNC. Florida State hosts Clemson on Sunday.
___
More AP college basketball: http://apnews.com/Collegebasketball and http://www.twitter.com/AP_Top25
___
Follow Aaron Beard on Twitter at http://www.twitter.com/aaronbeardap