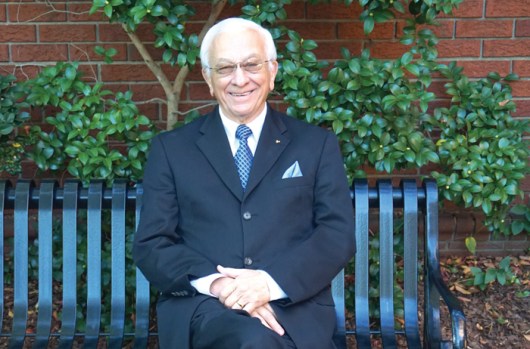 Paul Fisher, chairman emeritus of F&M Bank, sits in the garden behind F&M Financial Center that was recently named in his honor as 'Mr. Paul's Garden.' Submitted photo

SALISBURY — Back in 2000-02, when F&M Bank was doing the major renovations that led to the F&M Financial Center on North Main Street, then-Chairman and President Paul Fisher asked for only one thing.

He wanted a Charleston-style garden in the back that employees and the public could enjoy.

As construction continued, the small garden somehow fit perfectly behind the new financial center and next to Easy Street, which the banking company also provided as part of F&M Financial Plaza.

Soft music was piped in. With its trees, flowers, benches, fountain, brickwork and an ornate gate and fence, the garden became the cherished spot Fisher envisioned for F&M employees and downtown in general.

When people who work at F&M Financial Center arrive for work or leave for home, they almost always go through the garden. It also became a place for photographs, such as prom portraits, and several weddings have been held in the garden.

But the years passed since its establishment without the garden ever having a name — until this past holiday season.

Back in January 2018, Haynes was the second person to arrive at the financial center on a snowy morning. She was taken aback as she walked toward the garden gate.

“It was so beautiful in the snow,” Haynes said, and she stopped to snap a photo, which she saved on her cellphone.

This fall, as Haynes and Chief Executive Officer and Chairman Steve Fisher talked about what to do for a 2018 F&M Christmas card, Haynes remembered her snowy picture of the Charleston-style garden.

“Is this an option?” she asked Steve.

He liked it and suggested they direct digital artist Zelia Frick to edit the photograph and add a magnolia Christmas wreath. Meanwhile, Haynes and Steve Fisher also discussed what the card’s inside message should say.

The first draft mentioned the “Charleston garden” pictured on the front of the card, but they quickly agreed it seemed silly to call it that when pretty much everyone referred to it as “Mr. Paul’s Garden,” for the man who is now F&M’s chairman emeritus.

It was then they hit on the idea of formally naming it exactly that — Mr. Paul’s Garden — and using the Dec. 8 employee Christmas party as the way to announce it. Paul Fisher was there.

Paul Fisher says the gesture from F&M, the company to which his whole career was devoted, meant a lot.

“Gosh, that’s the best thing anybody has even done for me and can do for me,” he said Thursday. “… They surprised me at a gathering, and I couldn’t say anything.”

Earlier this week, a sign was installed on a brick post at the garden entrance with the Mr. Paul’s Garden name.

He recalled the construction and renovation phase that accompanied F&M Financial Center and how an ugly concrete block warehouse had been in that area.

He told Steve Fisher, who was overseeing the project, that “we need to have something pretty here,” and he suggested that Steve and architect Bill Burgin incorporate a Charleston garden.

Paul Fisher loved the result and likes to call it “the prettiest garden in town on the most famous street (Easy Street) in town.”

“When you go in there and sit,” Paul Fisher added, “it’s like you’re in an outside church. It’s a wonderful place to catch up with yourself and the world.”

Fisher doesn’t think any of the F&M employees at the Christmas party, even Steve, knew how special it was having the garden at the financial center named for him.

Paul Fisher had done a similar thing for his late father (banker Jacob E. Fisher) back in 1990, when a garden was established at the F&M headquarters bank in Granite Quarry.

Much of the care and maintenance of Mr. Paul’s Garden falls to an F&M employee who wishes to remain anonymous.

“She loves gardening,” Haynes said, “and for many, many years is the person who plants the flowers and waters them every day. She just likes to quietly dig in the dirt.”

“I’m a happy camper with that little gift,” Fisher said.