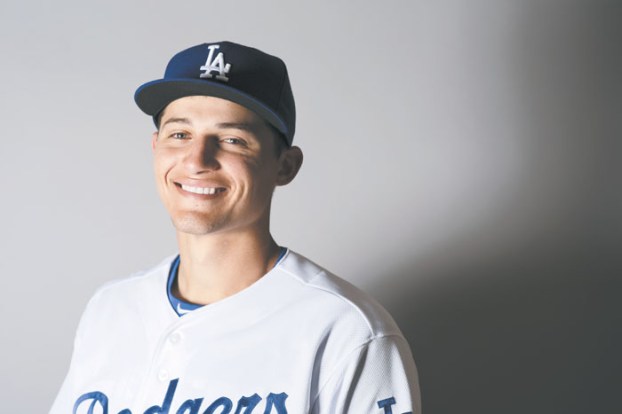 LOS ANGELES (AP) — The Los Angeles Dodgers reacquired catcher Russell Martin in a trade with Toronto on Friday, and also reached one-year deals with their seven remaining arbitration-eligible players.
The NL champions agreed with Corey Seager ($4 million), Joc Pederson ($5 million), Chris Taylor ($3.5 million), Enrique Hernandez ($3,725,000), Pedro Baez ($2.1 million), Josh Fields ($2.85 million) and Yimi Garcia ($710,000) on 2019 contracts.
With catcher Yasmani Grandal leaving for a deal with Milwaukee earlier in the week, the Dodgers had room to bring back Martin.
Whether they’re done looking at catchers, including a trade for Miami’s J.T. Realmuto, team executive Andrew Friedman wouldn’t commit.
“Our focus is still and will always be on how we can continue to improve and make ourselves better,” the club’s president of baseball operations said. “That remains our mindset in every respect.”
In exchange for Martin, the Dodgers sent minor leaguers Andrew Sopko, a right-hander, and Ronny Brito, an infielder, to the Blue Jays. Toronto will send $16.4 million to Los Angeles by Sept. 1, offsetting most of the $20 million Martin is owed in the final season of his contract.
A four-time All-Star, Martin was with the Dodgers from 2006-10 and helped lead Los Angeles to three playoff appearances.
“He was really excited about it,” Friedman said. “LA holds a special place in his heart. He wants to win a championship and he talked about how he’ll do anything you guys want.”
Friedman said he’s not sure how playing time will be divided between Austin Barnes and Martin.
“We really like what they bring behind the plate in terms of their receiving and game calling and the work they’ve put in to prepare for a game,” he said.
Last winter the Dodgers brought outfielder Matt Kemp back to the team and he had a strong first half to earn an All-Star berth before being traded last month.
Now it’s Martin’s turn.
“We’re excited about bringing Russell on board,” Friedman said. “Kind of coming full circle for him. He is still really good at what he does behind the plate, a grinder at the plate. I feel like he will team up with Austin to be a really good duo behind the plate.”
The 35-year-old Canadian signed with the New York Yankees as a free agent after the 2010 season and spent two seasons in the Bronx before playing two seasons with Pittsburgh and four with Toronto.
He started 71 games at catcher and 21 at third base last year, hitting .194 with 10 home runs and 35 RBIs.
The Blue Jays bid farewell to Martin in a tweet: “For your leadership. For your passion. For representing Canada’s Team. Thank you, Russ.”
Martin was a 17th-round pick by the Dodgers in the 2002 amateur draft. They sent a tweet welcoming him back.
Overall, Martin’s teams have made the postseason nine times in 13 years. He has caught 1,519 games, including 1,455 starts, which ranks third among active players behind Yadier Molina (1,836) and Brian McCann (1,529).
Sopko, 24, is 27-17 with a 3.61 ERA in four seasons. Brito, 19, signed with the Dodgers as an international free agent from the Dominican Republic on July 2, 2015. In three seasons, he has hit .259 with 15 homers and 104 RBIs.
Seager was eligible for arbitration for the first time this winter. He played just 26 games before being shut down for Tommy John surgery and arthroscopic hip surgery for a labrum repair. The Dodgers believe the shortstop will be ready for opening day.
Pederson proved a solid leadoff hitter, batting .309 but he struggled against left-handed pitching with just nine hits and one homer in 53 at-bats versus southpaws.
Taylor started at four different positions last season, including shortstop in Seager’s absence. He had career highs in doubles, triples and walks.
Hernandez played every position except catcher in 2018. He struggled at the plate during the first half of the season before hitting .349 over the final two months. His hot bat went cold in October, however, and he was 5 for 41 in the postseason.
Baez established himself as one of the top relievers in the Dodgers’ bullpen last season.
Fields and Garcia, both right-handed relievers, missed time with injuries last year.
___
More AP MLB: https://apnews.com/tag/MLB and https://twitter.com/AP_Sports