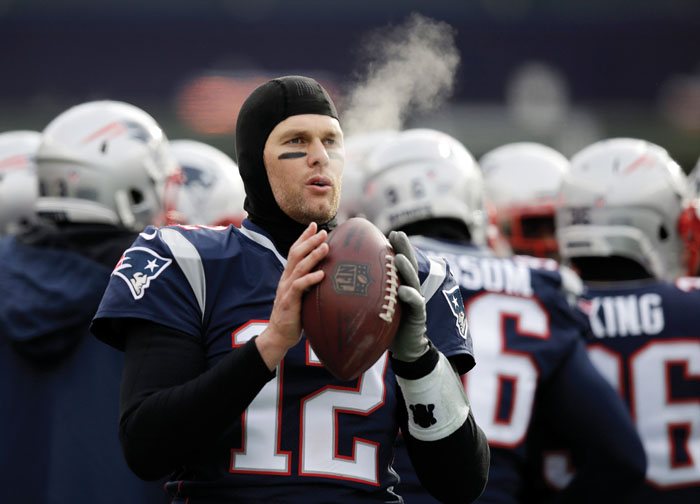 FILE - In this Dec. 31, 2017, file photo, New England Patriots quarterback Tom Brady keeps limber on the sideline in the cold weather during the first half of an NFL football game against the New York Jets, in Foxborough, Mass. His coach downplays it, but Tom Brady knows the cold-weather New England Patriots should have an advantage when they host the warm-weather Los Angeles Chargers in Sunday’s AFC Divisional Round game. (AP Photo/Charles Krupa, File)

By MIKE SHALIN, Associated Press
FOXBOROUGH, Mass. (AP) — His coach downplays it. Tom Brady does not.
Brady knows the cold-weather New England Patriots should have an advantage when they host the warm-weather Los Angeles Chargers in Sunday’s AFC divisional-round game.
Hours before, Bill Belichick said, “We’re playing the Chargers. We’re not playing the weather — whatever it is, it is. We’re going to be on the same field” when asked about having no advantage. His quarterback made it clear this team is quite comfortable in the expected chilly conditions.
New England will apparently dodge the snowstorm that’s making its way to the East Coast, but it will be cold. It’s the kind of cold the Patriots, who are seeking their eighth straight trip to the AFC title game and a sixth Super Bowl title in the Brady era, know all too well.
“I just think the ability to practice in it,” Brady told his regular Friday media session. “Like today, it’s very similar to what we’re going to get on Sunday, so just knowing how many layers you have to put on, and kind of how you’re going to feel when you have the nice, warm, heated benches out there like we will on Sunday.
“It’s cold and that’s just this part of this time of year. But it’s good to be playing when it’s cold out, it’s good to be playing this time of year in Foxborough.”
Thursday provided the home team with much of what this area has to offer in early January.
“The weather changed a little bit yesterday,” Brady said. “It snowed at the start, then got sunny, then got cloudy, then got windy, then got sunny and it was just a bunch of different things. Just to practice in it, we’re prepared for it, and hopefully we can use some of the things that we’ve learned to our advantage.”
Brady has reached the AFC title game 12 times in 16 seasons as a starter. He will play in his record 38th postseason game and comes in 27-10. He’s 41 years old and hasn’t had the greatest season of his stellar career, but still gets, well, chills about playing in the cold.
“It’s a good time of year,” he said. “I think everyone’s excited to be out there. It’s just a great environment of football.”
Brady and counterpart Philip Rivers (37) combine to be the oldest pair of quarterbacks to face each other in a postseason game, breaking the mark Brady had with Peyton Manning.
“That’s pretty cool,” Brady said of the age record. “It’s just fun to be around; I’m out there today practicing and it’s whatever degrees out: 10 degrees, 15 degrees with the real feel. And I’m sitting here just playing with my friends, throwing the football around. So it’s just a great blessing to be able to do it, do it here for this team, which I have loved to do. Philip’s been on the same team – it means a lot.
“We all work hard to get to this point. These things aren’t guaranteed, very tough to get to this point in the season. Every team four months ago thought they’d be playing in these games. The reality is that’s not the way the NFL is. We’re very fortunate and we have to go out and try and take advantage of it.”
Brady is 7-0 head to head with Rivers. The only time Rivers has beaten New England was in 2008 when Brady was injured and Matt Cassel was at QB.
But Rivers has had a terrific season, and the Chargers (13-4) won at Baltimore in the wild-card round. LA is 8-1 on the road, while New England is 8-0 at home this season.
“He’s a great player,” Brady said. “They’ve had a lot of great teams in San Diego over the years, led by him. He’s a great passer, tough, very accurate. He’s a great leader. So when I think of that team it’s just he’s an emotional leader and he always gets those guys going. They always have a good offense . it’s a good team, obviously they’re good in all three phases, they’ve won a lot of games this year, gone on the road a bunch, so they’re very mentally tough. It’s going to take our best to win.”
Led by Rivers, Brady notes the Chargers’ ability to come back in games, something that has been a Brady trademark over the years.
“They were down 14 to KC with four minutes left, down a bunch to the Steelers,” Brady said. “You just can’t count them out.”
___
More AP NFL: https://apnews.com/tag/NFL and https://twitter.com/AP_NFL