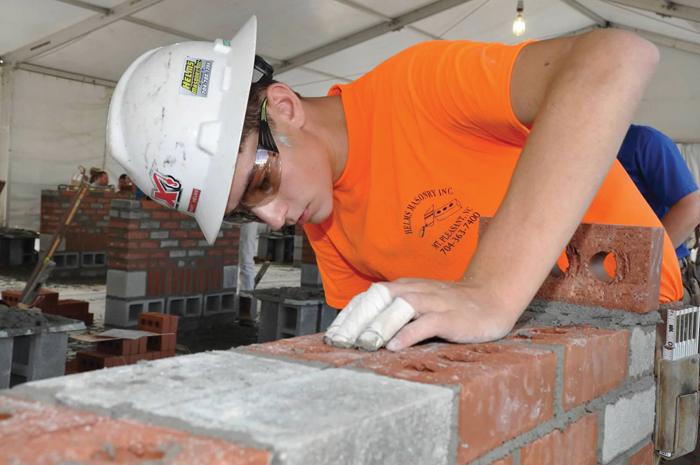 West Rowan High School student Grant Helms works against the clock on a project at the 2018 North Carolina State Fair Masonry Apprentice Contest. He will move on to compete in Las Vegas in late January. Submitted photo

In October, aspiring professionals from across the state gathered at the North Carolina State Fair for the 65th annual Apprentice Masonry Contest.

The men and women, each sponsored by his or her respective employers, were each out of high school and on the path to careers in bricklaying.

All except contestant Grant Helms, that is. As a junior at West Rowan High School, Helms was the only contestant among about 40 yet to leave school and venture into the working world. He was sponsored by his father’s company, Helms’ Masonry of Mount Pleasant.

But don’t let Helms’ years fool you. Though young, he claimed first place in the competition against older, more experienced peers.

He won’t be stopping there. The win qualified him for another competition later this month: the Masonry Contractors of America Association Masonry Skills Challenge.

Together with his family and West Rowan masonry instructor Rodney Harrington, Helms will fly to Las Vegas to compete nationally on Jan. 23.

Helms said his interest in masonry took off during his sophomore year, though he started taking masonry classes as a freshman.

“It’s all I think about,” he said. “… My first project was bad, but you never stop learning in this industry.”

Harrington agreed, but added that Helms had a little something extra leading him toward success.

“You never stop, but what helps is the drive behind the student,” Harrington said. “This young man works extremely hard. He’s in here every day busting his tail.”

A small smile came to Helms’ face as he heard that comment, and he lifted his shoulders in a shrug.

“I just like hearing my name be called out in front of everybody,” said Helms.

Helms started competing last year, claiming the top spot in the Masonry 1 category in Rowan County’s competition. From there, he ventured to a competition held at Lowe’s Home Improvement at Concord Mills.

“I was going for fun, because I had never built a three-hour project before,” he said.

These lengthier projects are given to students and participants of higher masonry skill levels, of which there are three.

On his first three-hour project, Helms claimed second place. “So I decided I’m going to move up.”

Helms participated in one more competition, the Samuel A. McGee contest, before he took the top spot at the State Fair.

At home and preparing for the late January contest, Helms and Harrington on Monday circled a completed practice project. The three-hour project was judged on straight edge, plumb, level and time.

Gaps and slopes as small as 1/16 of an inch result in points off projects. Helms was docked for only three points.

“I tell all my students, what separates you from the rest of the people is, if you’ve got a guy that comes in here and he lays 10 brick a day and you lay 50 brick a day, by competition time who’s going to be better?” Harrington said. “… (Helms) certainly exceeds that because, if I would let him, he would just about build one of these a day.”

The winner of the April contest will travel to Louisville, Kentucky, to compete against other champions from across the nation.

He said he runs practice with his masonry students just as if they were practicing for another sport like football. There are drills and time limits and scoring. Of course, it’s not all tough love.

“I tell students when they come in, ‘Guys, don’t get disappointed. This is not an easy thing to learn,'” he said. “‘But pay attention to what you’re doing now, and in four weeks go back and look at what you’ve done. Look how much better you’ve got.'”

Pops at the Post temporarily moves to Transportation Museum