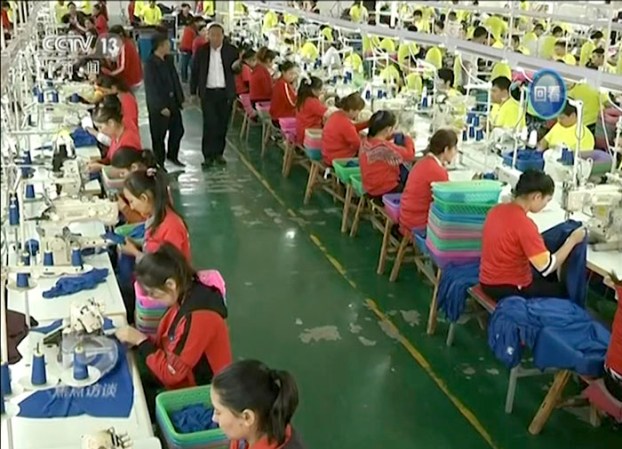 Muslim trainees work in a garment factory at the Hotan Vocational Education and Training Center in Hotan, Xinjiang, in northwest China. A Statesville company that stocks college bookstores with T-shirts and other team apparel cut ties with a Chinese company that drew workers from an internment camp. CCTV via AP file video

By Martha Mendoza and Yanan Wang

Badger Sportswear of Statesville, a leading supplier of T-shirts and other team apparel to college bookstores, on Wednesday cut its ties with a Chinese company that drew workers from an internment camp holding targeted members of ethnic minority groups.

In recent years, authorities in the far west Chinese region of Xinjiang have detained an estimated 1 million Uighurs and Kazakhs in heavily secured facilities where detainees say they are ordered to renounce their language and religion while pledging loyalty to China’s ruling Communist Party.

Last month, an Associated Press investigation found the Chinese government had also started forcing some detainees to work in manufacturing and food industries.

The investigation tracked recent shipments from one such factory, the privately owned Hetian Taida Apparel, located inside an internment camp, to Badger Sportswear in Statesville.

In a statement posted to its website, Badger said Wednesday it will no longer do business with Hetian Taida or import any goods from the same region “given the controversy around doing business” there.

“Furthermore, we will not ship any product sourced from Hetian Taida currently in our possession,” the company said, adding that the supplier accounted for about 1 percent of Badger’s total annual sales.

Badger Sportswear goes to university bookstores and sports teams large and small around the country, places like Charlotte Country Day School squash team in Charlotte, Rhode Island’s Coventry Little League and Hansberry College Prep in Chicago, according to its website and advertisements.

Dozens of college bookstores advertise their gear printed on Badger Sportswear, including Texas A&M, University of Pennsylvania, Appalachian State University, University of Northern Iowa, University of Evansville and Bates College. However, it’s impossible to say if any particular shirt is made with forced labor.

In a previous conversation with the AP, Wu said while Hetian Taida was in the same compound as one camp that the government calls a “vocational skills education and training center,” Hetian Taida was not involved in the camp’s activities.

However, Wu said his company employed 20 to 30 “trainees” from the center as part of the region’s efforts to alleviate poverty.

Asked about the case, Chinese Foreign Ministry spokesman Lu Kang said Thursday that while the ministry doesn’t generally comment on individual business decisions, Badger appears to have been acting on “misinformation.”

The vocational training centers in Xinjiang are “totally different from so-called forced labor,” Lu said, referring further questions on the camps to statements made by the regional government, which maintains that the centers help poor Uighurs gain employable skills.

“It’s a tragedy for that business,” Lu said.

Universities stocking Badger clothing began pulling items from their shelves and websites after the report appeared in December.

Hetian Taida was certified as complying with good business practices by Worldwide Responsible Accredited Production, which sent an auditor to a different Hetian Taida facility, not the one inside the internment camp. That factory “is not engaged in the use of forced labor,” WRAP and Badger concluded.

But Badger added that “historical documentation provided by Hetian Taida regarding their prior facility was insufficient to conclude with certainty” that it had met Badger’s sourcing standards.

WRAP spokesman Seth Lennon confirmed to AP that the facility they investigated is not the same place AP wrote about.

“Our model centers around factories approaching us requesting to be audited,” Lennon wrote in an email. “We do not seek out any factories whatsoever to audit unsolicited.”

The Washington-based Workers Rights Consortium, which has agreements with many education institutions across the U.S. to ensure the products they sell on campus are ethically manufactured, conducted its own investigation and found additional evidence confirming the factory supplying Badger was in an internment camp.

“There is nothing in Badger’s statement, or WRAP’s, that calls into question the conclusion that Hetian Taida used detainee labor while producing for Badger,” he said.

Any item that is the product of forced labor is illegal and subject to seizure by U.S. Customs and Border Protection, which said in December it was reviewing the reports. A CBP spokesman had an automatic message Wednesday that he were unable to respond to emails or telephone calls because of the government shutdown.

SALISBURY — John Love chanted from the roadside that all he and the other dozen or so union members were... read more