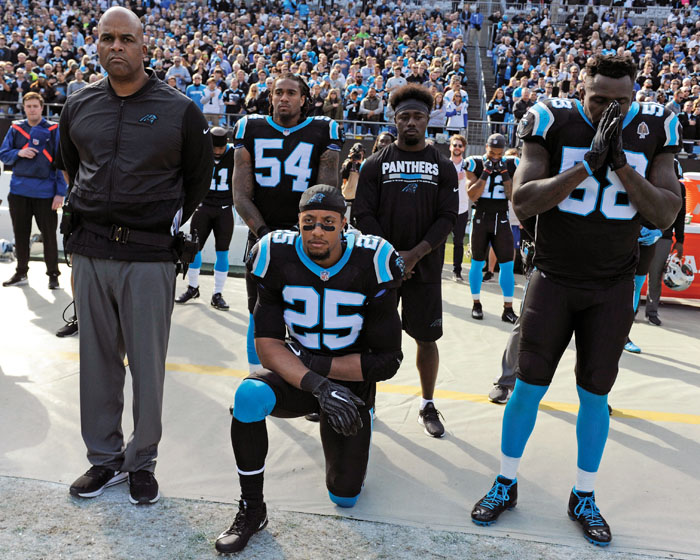 FILE - In this Nov. 25, 2018, file photo, Carolina Panthers' Eric Reid (25) kneels during the national anthem before an NFL football game against the Seattle Seahawks, in Charlotte, N.C. The NFL and the NFL Players Association has released a joint statement saying an independent administrator found Panthers safety Eric Reid received the “normal” number of drug tests this season and he was not the subject of targeting by the league. Reid said in December he had been tested seven times by the NFL. He said the league was targeting him because of the ongoing collusion case against the NFL alleging that team owners conspired to keep him out of the league because of his decision to kneel during the national anthem to protest racial and social injustice. (AP Photo/Mike McCarn, File)

CHARLOTTE (AP) — The NFL and the NFL Players Association say outspoken Eric Reid was not singled out with excessive drug tests.

The joint statement released Wednesday said an independent administrator found Reid received the “normal” number of drug tests this season. The statement said, “there is no evidence of targeting or any other impropriety with respect to his selection for testing.”

Reid has said he believes he was repeatedly tested because of his pending lawsuit against the league.

The Carolina Panthers safety said in December he had been tested seven times by the NFL. Reid said the league was targeting him because of the ongoing collusion case against the NFL in which he alleged team owners conspired to keep him out of the league because of his decision to kneel alongside former 49ers teammate Colin Kaepernick during the national anthem to protest racial and social injustice.

However, a person familiar with the situation told The Associated Press on Wednesday that Reid was not tested as many times as Reid said he was. The person did not say the exact number of times Reid was tested. The person spoke on condition of anonymity because of confidentiality of the case.

“We take any claim questioning the integrity of our collectively bargained performance enhancing drug policy seriously,” the joint statement from the NFL and the Players Association read.

The statement said an independent administrator was asked to review the policy and produce a report on Reid’s claims of targeting. A copy of this report, which contains personal and confidential testing information, was recently provided to Reid.

“We will not breach any player’s confidentiality, but can confirm that the report documents the dates he was randomly selected for testing and the actual dates of the drug tests,” the statement said. “The report also demonstrates that Mr. Reid’s tests were randomly generated via computer algorithm and that his selection for testing was normal when compared with the number of tests players were randomly selected for throughout the league during the time that he was on an active roster.”

He joined the Panthers on Sept. 27 as a free agent.

Because of when he joined the league he was immediately subject to two drugs tests — one for performance enhancing drugs and another for substance abuse, per league policy.

However, Reid claimed he was tested an additional six times over the next 11 weeks, which would be high above the league norm. Most players say they are subject to testing about two or three times per year over the course of a 17-week regular season.

While Reid said in December “I’m not surprised” by the number of the drug tests, his coaches and teammates began to grow a little skeptical of the amount of tests.

Panthers coach Ron Rivera quipped at his news conference in December that “if my name came up that many times I would buy a lottery ticket.”

Reid continued to protest with the Panthers by kneeling during the national anthem this season.

Reid was also fined four times by the NFL this season for illegal hits, costing him more than $50,000. He appealed all of the hits and one of them was overturned.