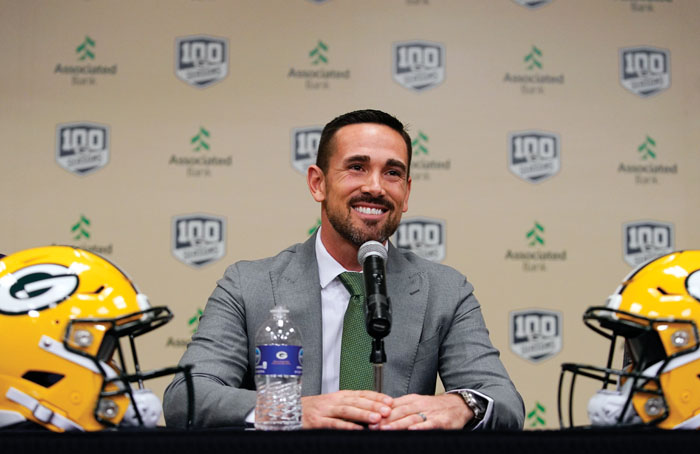 GREEN BAY, Wis. (AP) — Matt LaFleur has never been in charge of an NFL team before, and until last year had never called plays for one either.

On Wednesday, he took over the Green Bay Packers, who have missed the playoffs two years in a row — and a team with a two-time MVP quarterback in Aaron Rodgers, whom LaFleur must help to get back to playing his best.

“I briefly spoke to (Rodgers) prior to accepting the job,” LaFleur said during an introductory news conference at Lambeau Field.

“That’s kind of how I had an idea that maybe I was in the running for it.”

According to team president Mark Murphy and general manager Brian Gutekunst, LaFleur was by far the best of the other nine candidates who interviewed for the job after longtime head coach Mike McCarthy was fired on Dec. 2, with four games remaining in his 13th season in charge.

“Obviously we cast a fairly large net, much larger than the 10 people that we interviewed,” Murphy said. “Went through the nine (interviews) and quite honestly, no one really stood out. There were a lot of strong candidates, but there wasn’t one that just jumped out at us.

“Matt was our last candidate, and we’d heard great things about Matt through our vetting process. A lot of the coaches and others that we talked to talked about his background, his experience. So were really excited going into it.”

Murphy, Gutekunst and executive vice president/director of football operations Russ Ball then emerged from LaFleur’s interview Sunday in Nashville even more excited — and agreeing that they had their man, despite having planned to host a second round of interviews.

After sleeping on it, they offered the job to LaFleur on Monday, and he arrived in Green Bay on Tuesday night to sign his contract.

“It’s always been a dream of mine to be an NFL head coach, but to be the head coach of the Green Bay, it is surreal,” LaFleur said.

LaFleur comes to the Packers after one season as the play-calling offensive coordinator of the Tennessee Titans, a job he took a year ago because he knew he needed to “challenge myself.”

CLEVELAND (AP) — The Browns didn’t have to go far to find their new coach.

Freddie Kitchens was already in the building.

The 44-year-old Kitchens, who had a dazzling eight-week run as the team’s interim offensive coordinator, is finalizing a contract to become Cleveland’s ninth coach since the franchise’s 1999 rebirth, a person familiar with the decision told the Associated Press on Wednesday. The person spoke on condition of anonymity because the team is not commenting on the imminent hire.

ESPN was first to announce the decision.

Also, Gregg Williams, who went 5-3 as Cleveland’s interim coach and defensive coordinator this season, is no longer with the team, the person said. Williams was the first candidate to interview for the coaching vacancy.

Kitchens has no previous head coaching experience, but his work with Cleveland’s offense — most notably quarterback Baker Mayfield — in the season’s second half vaulted him ahead of the other six candidates interviewed by the Browns, who were looking for the right coach to lead them following a stunning turnaround season.

Kitchens will get the chance.

Under his leadership, Mayfield, the No. 1 overall pick in last year’s draft, threw 19 of his NFL rookie record 27 touchdown passes.

while erasing any doubt that he could be the coveted franchise quarterback that has eluded the Browns for decades.

Kitchens and Mayfield formed a strong relationship during their time together, and Browns owners Dee and Jimmy Haslam along with general manager John Dorsey are counting on the pair taking Cleveland to new heights.

It’s a spectacular rise for Kitchens, who began the season as the team’s running backs coach. He took over the Browns offense when coordinator Todd Haley was fired an hour after coach Hue Jackson’s dismissal on Oct. 29 and Kitchens quickly showed he had coaching chops.

He revamped the offensive scheme, using multiple formations and tweaking the game plan to include calls that he knew his players were comfortable running. Kitchens, who was a three-year starting quarterback at Alabama, wasn’t afraid to be creative as he used wide receiver Jarvis Landry on running plays and to throw passes, and he got major production from rookie running back Nick Chubb, left tackle Greg Robinson and receiver Breshad Perriman — three players under-utilized by Jackson and Haley.

Kitchens and Williams kept their players focused and motivated following the mid-season coaching change and the Browns went 7-8-1 following an 0-16 season in 2017 under Jackson.

As the team’s success grew, Kitchens never campaigned to be Cleveland’s coach but leading a team was always a goal.

The barrel-chested Kitchens became a fan favorite in a city that loves underdogs.

Kitchens is the fourth coach hired by the Haslams since they bought the team in 2012.

He’d spent the 2017 season as the Los Angeles Rams’ offensive coordinator under Sean McVay, and Murphy said he believed LaFleur would have been “the hot candidate. He’d be flying all over the country talking to everybody.”

Instead, the Packers were the only team to interview LaFleur for a head coaching job since the season ended.

“I took the risk because I knew that I needed to get out of my comfort zone and grow as a coach.”

Meanwhile, it’ll be vital for LaFleur to find a comfort zone with Rodgers, who is coming off a down season by his standards. Although he threw only two interceptions in 16 games, he also threw only 25 touchdown passes, the lowest full-season total of his career. He also completed only 62.3 percent of his passes, the second-lowest rate of his time as a starter, and finished with a 97.6 passer rating, well below his 103.1 career rating.

Rodgers also played all season with a left knee injury sustained in the season-opener against Chicago and left the season finale with a concussion after three offensive series as the Packers finished 6-9-1.

It’ll be up to LaFleur to get Rodgers back to the MVP form he showed in winning the award in 2011 and 2014, and in rallying the Packers from a 4-6 start in 2016 to a berth in the NFC championship game that year.

The Packers lost that game to the Atlanta Falcons, led by quarterback Matt Ryan, who won the league’s MVP that season.

“I’ll tell you what, I cannot wait to get to work with him,” LaFleur said of Rodgers. “I think he’s equally excited. There’s a lot of work to be done in front of us, but just looking forward to that opportunity.”

At the same time, LaFleur will have to coach the entire 53-man team, not just the quarterback. And the Packers are convinced he can both lead the team and reinvigorate Rodgers.

“I think we’ve got the perfect candidate to lead us to where we want to go,” Gutekunst said. “There’s one goal — always has been one goal — and that’s to win world championships. We’re excited to get started.”