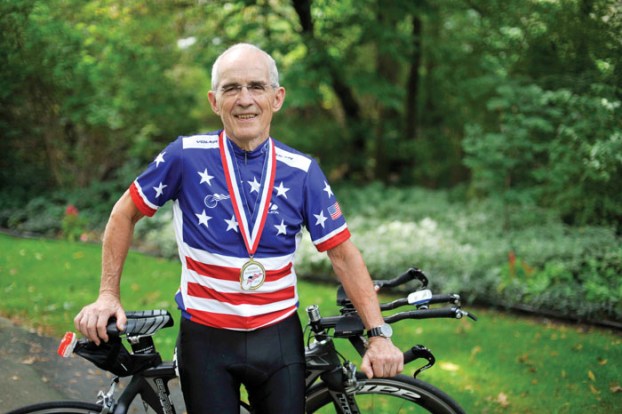 FILE - In this Tuesday, Aug. 10, 2010 file picture, Carl Grove poses for a portrait at his home near Bristol, Ind., USA. The U.S. Anti-Doping Agency informed Grove that traces of trenbolone, an anabolic steroid used by U.S. cattle farmers to bulk up livestock, were detected in a urine sample he gave at the U.S. Masters Track National Championships in Trexlertown, PA., in July 2018, where the field’s oldest competitor again added to his collection of titles, setting times faster than men in their eighties, seventies and even sixties. (AP Photo/Elkhart Truth, Ryan M.L. Young, File)

Trouble in the cycling world 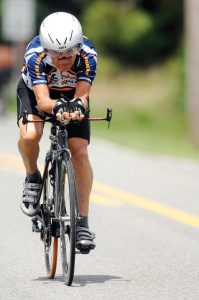 FILE – In this Tuesday, August 9, 2011 file picture, Carl Grove trains on an Elkhart County road near Bristol, In.. USA, in preparation for his return trip to the age-group world championships in Austria. The U.S. Anti-Doping Agency informed Grove that traces of trenbolone, an anabolic steroid used by U.S. cattle farmers to bulk up livestock, were detected in a urine sample he gave at the U.S. Masters Track National Championships in Trexlertown, PA., in July 2018, where the field’s oldest competitor again added to his collection of titles, setting times faster than men in their eighties, seventies and even sixties. (AP Photo/Elkhart Truth, J. Tyler Klassen, File)

With each pedal-stroke of his 80- and now 90-year-old legs, Carl Grove sought to show his fellow Americans that old age can be rich and rewarding.

His bike is his soapbox. As time caught up with many of his peers, the former United States Navy Band saxophonist , who played for U.S. presidents and visiting VIPs and who was born on his parents’ kitchen table during an Indiana thunderstorm the year before the Great Depression, is still riding to spread his stay-active message —  despite a doping violation caused by a diner steak.

He has set age-group cycling records in the 80- and 90-year-old categories and accumulated 18 national championships. What matters most to Grove is setting a healthy, don’t-give-up example in a country increasingly sickened by obesity and the inactivity of modern life.

Through his exploits, his hope was to share the simple maxim he lives by: “Do not sit down.”

“I see all kinds of people that, man, they go up two or three or four steps and I hear them kind of pant and what have you. This country is not like it used to be. I didn’t see that when I was younger,” says Grove, who will celebrate his 91st birthday on July 13.

“I try to show them that with just a little care and a little exercise and a proper attitude that, maybe, they can live the last eight, 10 years of their life with quality and not have aches and pains.”

At the end of last year, the stay-fit mission he calls his “life’s work” suffered a mighty and, in hindsight, completely unfair and unnecessary blow.

The U.S. Anti-Doping Agency informed Grove that traces of trenbolone, an anabolic steroid used by U.S. cattle farmers to bulk up livestock,  were detected in a urine sample he gave at the U.S. Masters Track National Championships in Trexlertown, Pennsylvania, last July, where the field’s oldest competitor again added to his collection of titles, setting times faster than men in their 80s, 70s and even 60s. He was stripped of his gold medal in the pursuit — the day he tested positive — but kept two others.

As USADA’s own investigators eventually determined, he knew he hadn’t doped. Instead, Grove had been inadvertently contaminated, probably by a dinner of cow’s liver he ate at a local diner on the evening of July 10 — his way of celebrating his gold medal in the time trial that day, where he was the only competitor in the 90-94 age group.

Still, the failed test was tough on Grove. He knew how it would look, how short attention spans would put the words “cycling,” ‘’doping,” ‘’steroids,” ‘’disqualified” together and imagine the worst, perhaps picturing a 90-year-old version of Lance Armstrong, cycling’s most infamous dope cheat.

Sure enough, and despite USADA slipping its public announcement out on a Friday , news than an athlete so old had tested positive generated worldwide headlines this week and a mix of incredulity, mirth, sympathy and cruelty online.

“I was really kind of down for a while. But I’m over it,” Grove now says, making his first and only public comments about the case in a telephone interview this week with The Associated Press. “I wanted to be an inspiration, if possible. I worked like a real horse to do it.”

“They struck me from the records . I don’t really care about that too much. The thing that I really, really care about is that I wanted to be a sterling, totally clean person in front of people that knew about me,” he said. “It looked like I had not been an honest person to a lot of people. I guess I was kind of worried about what did other people think, you know? Then, I began to think: ‘Well, some of them will believe me and some of them won’t.’ I guess that’s just the way it is.”

For the anti-doping system, this is another black eye. Grove says taxpayer dollars should, within reason, continue to be spent on policing amateur sport, not least to combat the increasing use of steroids. But the shaming of a well-intentioned great-grandfather smacks of vindictiveness. There are so many bigger battles, like cleaning up Russian sport , for the anti-doping system to fight.

USADA boss Travis Tygart says that even though the agency determined Grove wasn’t at fault, it had no choice but to issue him with a public warning for the failed test, the lowest-level step it could take in such a case.

He “ate meat and had a test that you then can’t just sweep under the carpet as much as you might otherwise want to,” Tygart said. “Cases like this make us bang our head against the wall. The outcome is not right and it’s a system gone awry.”

Grove thinks taxpayer dollars that fund anti-doping could be better spent on catching cheats, not bystanders.

“Us old guys are kind of like peanuts. I think that they’re wasting their time,” he said. “What can I gain at 90 years old doing drugs? Tell me, I just don’t know. So I think that somewhere there ought to be a cutoff and they ought to zero in on the stuff that is done for money reasons or whatever it may be. But I think after 65 or 70, you know, they ought to just give up.”

Grove has a resilient attitude to go with his good genes (his mother lived to 105 and his father, a barber, was still cutting hair in his retirement home until a few years before his death at 97). He already has launched into a new challenge: breaking the age 90-95 record for distance ridden in an hour, set by Frenchman Rene Gaillard in 2017 , who covered 29.278 kilometers (18 miles).

Grove said he’d start training immediately after getting off the phone with the AP.

“Sometimes, I ride in the morning and it’s a beautiful sunrise. I’m alive. I’m looking. I’m looking around. I’m feeling good. I’m so happy,” he said. “I’ve got so many gold medals and ribbons and stuff, and that doesn’t count. What counts is getting out there and doing the best I can do and show people what they can do.”