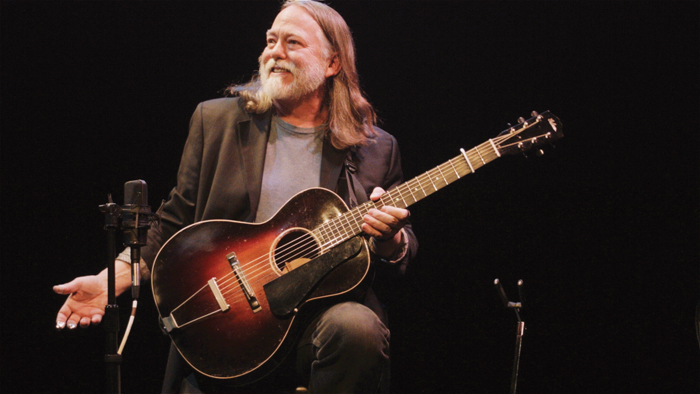 In lieu of an admission price, donations to Beacon Hall will be gratefully accepted.

The concert will be followed by a Master Class Guitar Workshop hosted by Ainslie the next morning, Saturday, Jan. 26 at 10 a.m. at 120 Elm St. Admission is $35. Spaces are very limited and are expected to sell out.

A seasoned performer and student of the roots music, Ainslie transcribed the original recordings of Delta blues legend Robert Johnson, published a book and has an instructional DVD on Johnson’s guitar work. On stage, in teaching concerts, workshops and school residencies, Ainslie explores the African and European roots of American music and culture.

Employing vintage guitars, an African-style fretless gourd banjo, and his homemade one-string cigar box guitar, Ainslie brings the music and its history alive with personal anecdotes. Ainslie has been heralded in reviews as a masterful and thoughtful historian, story teller and musician.

Ainslie has six solo CDs to his name and maintains an active recording, performing and teaching schedule that carries him around the country, to Canada and to Europe. His most recent recording is an award-winning collection of songs played on a 1934 Gibson archtop, “The Last Shot Got Him.”

Aislie has received numerous awards and grants for his work documenting and presenting traditional music. He has been a Public Fellow at UNC-Chapel Hill and received grants from the National Endowment for the Arts and the Folklife Section of the North Carolina Arts Council.

A leader in both the North Carolina and the Virginia Visiting Artist Programs, Ainslie served the citizens of these states in rural community college-based residencies from 1986 through 2000.
In 2000, Ainslie was also presented with an Indie (the Independent Weekly Triangle Arts Award, Durham, NC), with the National Slide Guitar Festivals’ Living Heritage Award, and the 20th Annual Sam Ragan Fine Arts Award for “outstanding contributions to the fine arts” (from St. Andrew’s Presbyterian College, Laurinburg, NC).

Beacon Hall’s mission is to connect the community through music and to empower students of all backgrounds to excel in academics, citizenship, and community pride.

For more information on the Beacon Hall concert and the Master Class Guitar Workshop contact info@beaconhall.org or call 980-234-4800.