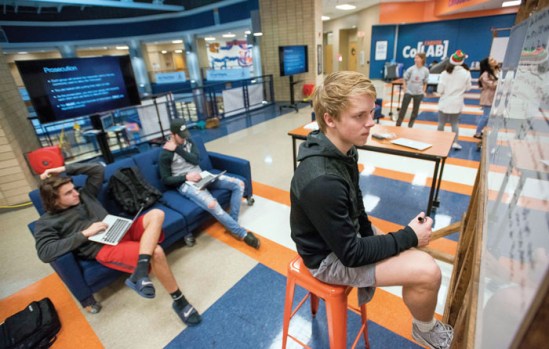 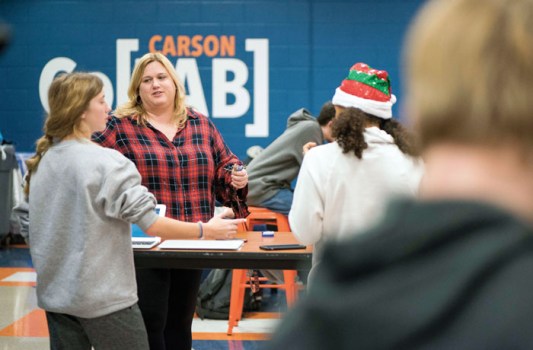 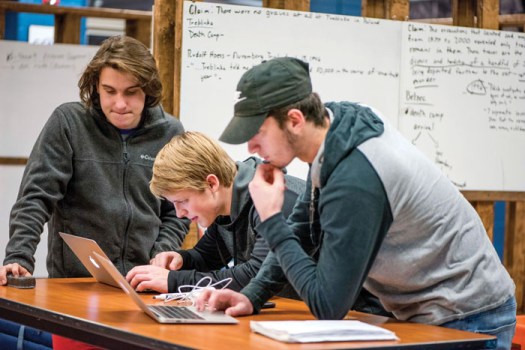 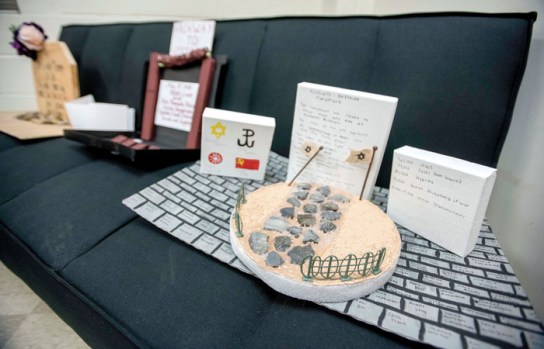 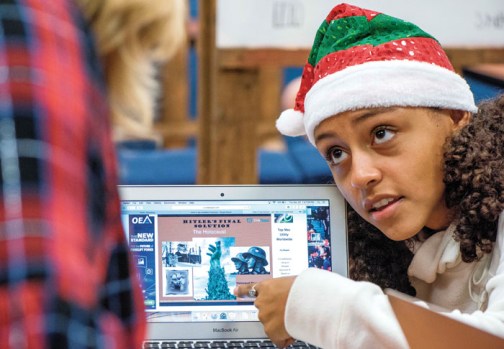 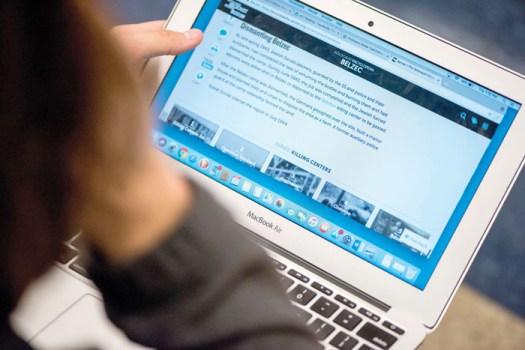 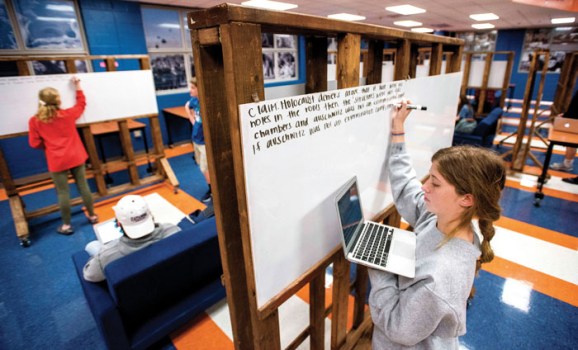 Samantha Towell writes one of many claims by Holocaust deniers before using the internet to research historical events to prove or disprove the claims. Jon C. Lakey/Salisbury Post

CHINA GROVE — It’s unusual to find one class in which each and every student is highly enthusiastic. Perhaps it’s even more unusual that the class is focused on the Holocaust and genocide.

The class at Carson High School hosted Dr. Zev Harrell, a Holocaust survivor who spoke to students in November.

The class was the brainchild of history teacher Lauren West. She proposed it to Principal Angelo Dellisanti in December 2017. She learned in the spring that the school board had approved it.

“I’ve just always had a fascination with the topic, and you hate to admit that because it’s such a morbid topic,” says West. “But to understand Hitler’s rise to power, the rise of anti-Semitism. Today we’re seeing a rise in anti-Semitism as well. I thought, ‘Wouldn’t it be great if we could offer a class?’ Hopefully by educating our youth, we can prevent something like the Holocaust from happening again.”

After the class was approved, West had to spring into action. She had just a few months to pull lesson plans together.

The class, open to all grade levels, had to appeal to kids from 15 to 18 years old.

“Building a class from scratch is difficult,” she says. “You know the end game where you want to get, but you have to build the road to get there.”

The first thing West had to do was submit an overview of the class, with units and descriptions. She talked with people who’ve taught the subject before, including Dellisanti’s wife. She was a resource for information and provided contacts for others who have taught it.

She used the website Donors Choose to list resources needed for the class and was recently advised that someone funded a class set of the book “Parallel Journeys.”

West spent her summer attending three residential seminars on the Holocaust and continuing to develop her curriculum. At each of the workshops, a Holocaust survivor spoke to the teachers.

West was inspired to ask Dellisanti if her class could host a survivor to speak to students. He supported the idea and asked her to be sure to include as many students as possible. She reached out to Harrell, who lives in Greensboro. When Harrell gave his speech, more than one student openly cried.

“I told the kids, ‘You are the last generation who will meet a survivor. This is something you can tell your children.’ That made a big impact on the kids,” West says. “It was a day they’ll never forget.”

Because this was the first year the class was offered, only one class period was reserved for it. Much to everyone’s surprise, students enthusiastically signed up for it, and there were enough registrants for two classes.

Alex London has given the topic a great deal of thought as a result of being in the class.

“It has changed me,” says London. “You realize how awful humans can be to each other if we let them. Taking classes like this allows you to see what we need to do and what to avoid. In the pyramid of hate, one step is stereotyping. It seems harmless to the person, but it can slowly grow over time until that person is seen as an outcast because no one stepped in. This class interested me because I’ve been interested in the world wars, and it was a great opportunity.”

“I think taking this class teaches you how to recognize situations you can be in,” Cloninger says. “If someone is bullying someone, it can escalate to physical. It gives you knowledge on how to stop escalation.

“I’ve never really hated any race or nationality, but I know people who aren’t in the best relationship with others. I don’t really understand it, but I try to help them understand everyone is not the same.

“I thought of our class when I read something the other day. A veteran talked about having his leg amputated in the war. ‘Yes, a Muslim man blew off my leg,’ he said, ‘but a Muslim man saved me and a Muslim nurse took care of me.’ To me, saying all Muslims are terrorists is like saying all Christians are KKK.”

Brodey Hogan had all the history credits he needed and did not plan to take any more. But he heard about the Holocaust and genocide class and signed up.

“In world history, the whole Holocaust just gets a few minutes. This was an opportunity to really learn about it. So I signed up,” Hogan says. “Some of the stuff is terrible, but it’s enlightening and we can learn how to prevent history from repeating itself. This class honors all the people who died.”

Vivian Cline was curious about how the Holocaust could ever happen.

“It helps you be a better person, to realize how genocide starts,” says Cline. “It can start with a small thought or action. It’s life-changing to see how something as small as a thought can have such effect.”

About Harrell, she says: “To see how happy and positive he was, after suffering — I’m so blessed, and I don’t have to go through all that. No matter what you go through, be happy.”

Aracelli Augustin was inspired by Harrell.

“He went through all that and then got his Ph.D. I told him he inspired me to continue my education. He smiled,” Augustin says. “It made my day.”

Students at any RSS high school can take classes offered at other schools if they have their own transportation.

As the class develops through the year, West is constantly gauging and making notes.

“I have a list of things I want to do differently next year — not content, but sequencing,” she says. “I’d also like to add more of the music aspect.”

“There’s some ‘dull and dry’ in history, that’s for sure. But if there’s one thing I can create a spark in you, make you want to learn more, I’ve done my job.”