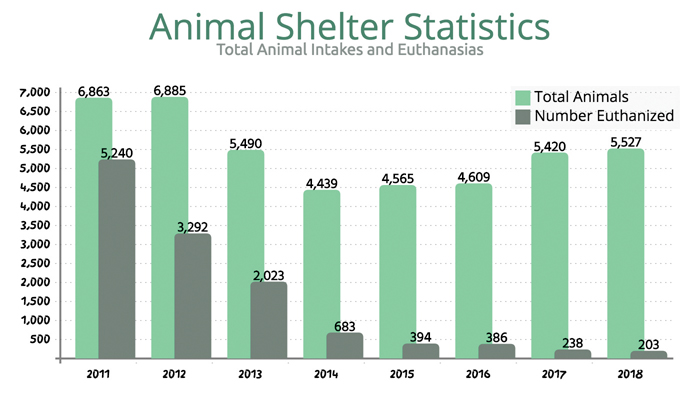 SALISBURY — For the Rowan County Animal Shelter, 2018 was a banner year: not a single adoptable cat or dog was euthanized, a first in the annual reporting of the shelter.

The victory is no small feat. Animal Services Director Bob Pendergrass said that some 5,527 dogs and cats were seen last year.

Of these, only 203 were euthanized from Jan. 1 to Dec. 31 — those that were severely ill or severely injured or animals with severe behavior issues, Pendergrass said.

Pendergrass said this is the third year the shelter has successfully seen every adoptable dog matched with a suitable home or rescue. But 2018 was the first time it had been able to include cats in this success story.

“Especially in the case of cats, this has involved sending animals out of state though rescue efforts,” he said.

“Many folks outside of the paid staff also work tirelessly to save these animals’ lives,” he said. “That means bringing them into new homes fast enough so that we don’t overfill the space that we have available at the shelter.”

The director also credited the shelter staff members for their work, saying he is “very proud of the job they do.”

“This is good news, but we should not assume the news can continue as we never know in the shelter business what the next day brings,” he said. “That means that we still have work to do as a community.”

One aspect of this work, he said, is to address a problem seen in Rowan’s animal intake numbers. With 1,427 cats, 1,684 kittens, 2,006 dogs and 410 puppies, the shelter saw one-quarter as many puppies as it did adult dogs, yet more kittens than adult cats.

“We, on a society level, do not manage our pet cats very well,” Pendergrass said. “There are still too many instances of reproductively capable cats running loose.”

The director said that cats do fall under Rowan’s leash law, meaning a cat that wanders off its owner’s property is in violation.

“But the bigger problem is that some folks do not spay or neuter their cats and then also let them wander,” he said. “We need every citizen to help us move forward. If we could avoid those unwanted pregnancies … that would help so much.”

Another factor in the record-setting year was the regular implementation of special adoption events. Approved by the county’s Board of Commissioners, they offer 80 percent off adoption rates.

Pendergrass said the adoption specials have helped move animals tremendously, and that another will be held from 8 a.m. to 3 p.m. Saturday.