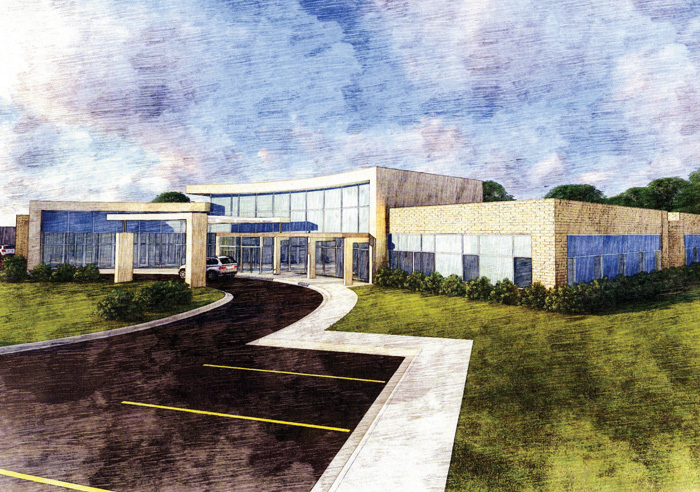 A rendering of the proposed Wallace Cancer Institute.

SALISBURY — The Salisbury Planning Board on Tuesday brought the Novant Health Wallace Cancer Center one step closer to reality when it rezoned a parcel from general residential to hospital services and combined four parcels of land.

The rezoning would allow a classification that would better fit the use and level of density. Hospital services would now allow apartment and commercial buildings. The setback requirements are generally decreased with hospital services.

The cancer center, which will be at the intersection of Mahaley and Mocksville avenues, will turn an employee parking lot into a one-story, 30,000-plus-square-foot building.

The parking lot has 279 spaces, and it will have 130 spaces when the building is completed. Board member John Schaffer expressed concerns about the decrease in parking. Zoning administrator Teresa Barringer said the number meets zoning requirements, which is 100 parking spaces.

Diane Folk, who lives close to the parcels off Mahaley Avenue, raised concerns about how her street will be affected by the cancer center. Folk said it takes her five minutes to get out of her driveway because of heavy traffic. Matt Folk added his concerns, saying he is worried about more people parking in that lot, which is near a residential area.

Matt Stiene, vice president of engineering at Novant Health, said the hospital is willing to work with the Folks and the community to ensure the Wallace Cancer Center doesn’t negatively affect the area.

Barringer said she would work with city engineers to discuss parking in the area, particularly street parking on Maheley. Schaffer recommended she also speak to engineers about potentially conducting a traffic study.

The board unanimously passed the rezoning to allow all four parcels to be hospital services.

Also on Tuesday, the Planning Board approved uncommon signs in the form of electronic message centers on parcels abutting Interstate 85.

Dusty Saine, events and logistics director at Rowan-Cabarrus Community College, talked about the college’s desire to have an electronic message center.

The passage of the text amendment Tuesday would affect only RCCC and Hood Theological Seminary. Properties that want an electronic message center would still have to receive approval.