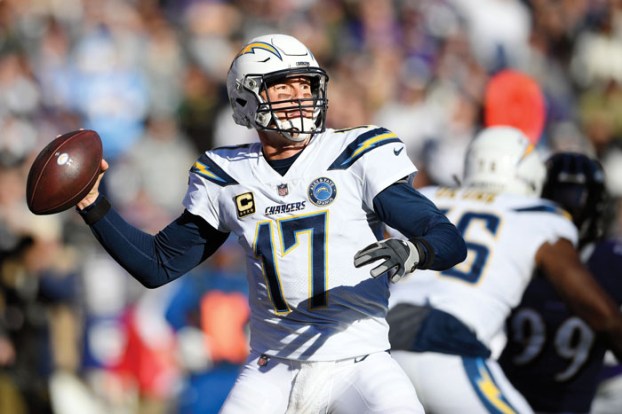 Green Bay gets its new coach 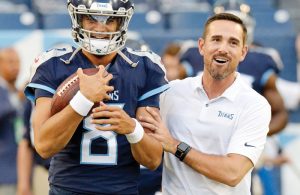 FILE – In this Aug. 30, 2018, file photo, Tennessee Titans quarterback Marcus Mariota (8) talks with offensive coordinator Matt LaFleur before a preseason NFL football game against the Minnesota Vikings in Nashville, Tenn. A person familiar with the decision says LaFleur has accepted Green Bay’s offer to become the next head coach of the Packers. (AP Photo/Mark Zaleski, File)

But as the Patriots quarterback began his preparations for Sunday’s divisional playoff game with the Chargers, he said he only had to think back to their AFC championship game matchup during the 2007 season to remind himself of Rivers’ toughness.

“I mean the guy played with a torn ACL. We played in 10-degree weather and he was still firing dimes out there,” Brady said Monday on Boston’s WEEI radio. “So, the guy’s got all of the confidence in the world. It makes for a great matchup.”

New England won that day and Brady enters Sunday’s game with a 7-0 record as a starter against Rivers, including 4-0 in games played in Foxborough and 2-0 in the playoffs.

Rivers earned his lone victory against New England during the 2008 regular season when the Chargers were still in San Diego. Brady was sidelined for that game by a knee injury he sustained in the Patriots’ season opener and Matt Cassel started in his place.

New England has won four straight games in the series since then , with the Chargers getting within a touchdown when they lost 23-20 at home in 2010. The Patriots beat the Chargers 21-13 last season.

History aside, Brady said it doesn’t diminish his respect for Rivers’ abilities on the field. At age 37, Rivers ended the regular season by throwing for at least 4,000 yards for the sixth straight season. He also posted at least 30 passing touchdowns for the sixth time since becoming the Chargers’ starter in 2006.

Like Brady he’s also been incredibly durable during his career, not missing a regular-season start for 13 consecutive seasons.

“He’s a great leader. He’s a great passer of the football,” Brady said. “He’s kind of like me. He wants the ball out of his hands. He kind of wants to be able to anticipate coverages. He’s got really a great group of skill players — backs, tight ends, receivers. They’re playing as well as any offense that’s played all season. He’s having an incredible year.”

So, too, is Los Angeles’ defense.

The Chargers ended the regular season ranked eighth in the NFL allowing 21 points per game, while allowing only 228 yards passing per game (ranked ninth). They beat the Ravens 23-17 in the wild-card round, but led 23-3 in the fourth quarter before allowing a pair of late touchdowns.

It’s why Brady said his preparations for the Chargers started immediately after the conclusion of that game.

“I was watching film all night,” Brady said.

Rivers could also have another target to throw to this time around against New England.

On Monday, the Chargers added tight end Hunter Henry to the active roster, less than eight months after he suffered a knee injury during an offseason workout in May.  He had surgery two weeks later and had been on the physically unable to perform list since the start of training camp.

“It gives them another weapon with a great quarterback who can use all of his weapons at all of the positions,” Patriots coach Bill Belichick said. “It’s another brick on the pile that we’ll have to deal with.”

While Brady won’t have any new personnel to throw to, he did spend New England’s bye week trying to fine-tune his own skills by working out with personal throwing coach Tom House.

“I had some extra time and thought it would be a good thing to do,” Brady said. “Football is all about techniques and fundamentals. … In the bigger games you need to be as sound as possible.”

LaFleur accepted an offer Monday to become the next head coach of the Packers, according to a person familiar with the decision. The person spoke to The Associated Press on condition of anonymity because neither the Packers nor the Titans had announced the decision.

The 39-year-old LaFleur spent this season as offensive coordinator for the Titans, his first calling plays in the NFL. He takes over for Mike McCarthy, who was fired during the season following a stunning home loss to Arizona on Dec. 2. Offensive coordinator Joe Philbin went 2-2 to close out the season as the Packers failed to reach the playoffs for the second straight year with a 6-9-1 record that was the second straight under .500 for the storied franchise.

He will be charged with returning the Packers to the playoffs on a regular basis.

McCarthy’s tenure of 12-plus seasons was by and large successful, highlighted by the 2010 Super Bowl season and nine playoff appearances.

Still, the once potent offense that could make up for other deficiencies slowed in 2018, a tumultuous year that began with Rodgers leading a stirring comeback victory in the opener over the Bears.  The two-time NFL MVP returned after halftime from a left knee injury that nagged him the rest of the season.

Rodgers’ 62.3 percent completion rate was his lowest since 2015 (60.7) and his 25 touchdown passes were a low for a season in which he played at least 15 games, though so were his two interceptions.  Injuries to Randall Cobb and Geronimo Allison forced the Packers to turn to rookies perhaps earlier than expected, though Davante Adams emerged as an elite receiver.

The relationship between LaFleur and Rodgers will be closely watched after the sometimes tenuous moments between the star QB and McCarthy. They characterized their relationship as close, but with ups and downs that come with two headstrong competitors who had worked together for more than a dozen years.

The Packers reportedly interviewed several candidates with head-coaching experience, including Philbin, Chuck Pagano, Adam Gase and Jim Caldwell. The instead opted for LaFleur, who had never called plays before this season and until now has never been in charge of an entire roster.

It is just one element of an offseason of change ahead in Green Bay.

Clay Matthews, one of the last remaining links to Green Bay’s Super Bowl-winning season, is a free agent after finishing with a career-low 3½ sacks in his 10th season with the Packers but the first under the tweaked 3-4 scheme installed by first-year coordinator Mike Pettine.

Cobb is also a prominent free agent for Green Bay, and a steady, experienced target for Rodgers — if he returns.

The running game could be a strength next season behind Jamaal Williams and Aaron Jones, who led the NFL in yards per carry before suffering a knee injury in mid-December. The coordinator’s job could be in flux, too. Philbin is well-liked by Rodgers and the 16-year NFL coaching veteran and he won respect from players for his even-keeled and straightforward demeanor in the transition following McCarthy’s firing.

Pettine’s defense showed flashes in his first year on the job. First-round draft pick Jaire Alexander displayed the potential of playing like the top cornerback the Packers desperately need. Injuries struck the defensive line, which was one of the team’s strengths coming into the season, and the Packers lacked a consistent rush at outside linebacker outside of surprise sacks leader Kyler Fackrell (10½).

Tennessee has changes coming, too. The Titans went 9-7 and missed the playoffs, ending the season ranked 27th in scoring and 25th in total offense while injuries took a toll. Quarterback Marcus Mariota will soon be working with his fourth offensive coordinator in five seasons.