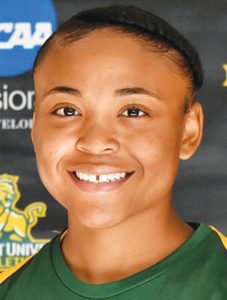 Aliyah Farmer (North Rowan) also had a big role in UNCP’s win against North Georgia.  The junior had 10 points, seven rebounds and two blocks in 19 minutes.

Robinson played at Montreat before coming to Livingstone.

The 5-10 senior is averaging 8.6 points and 5.3 rebounds. She’s started eight games but came off the bench on Monday.

Freshman Olivia Gabriel (Carson) has played in 11 games for South Carolina State and has scored 16 points.

Khaila Hall (West Rowan) has played in all 11 Longwood games and has started two. Hall is still only a sophomore on the court after getting a medical redshirt last season. She’s averaging 6.5 points per game.

Ajayi played very little as a freshman but has scored 690 points for the Cougars.

Maddy Zaferatos (Davie County) made two 3-pointers and scored eight points for Brenau in a 67-41 loss to Bluefield on Saturday.