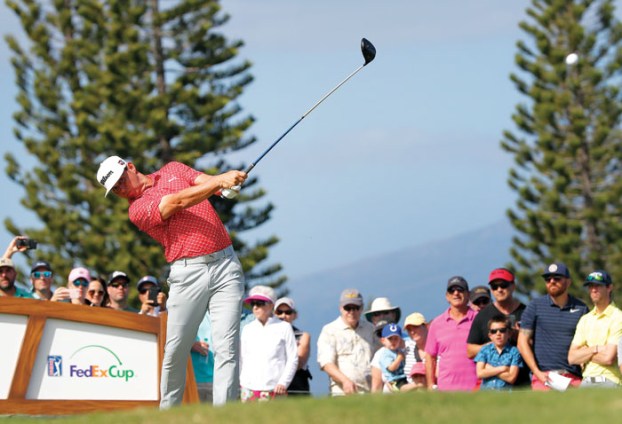 Gary Woodland plays his shot from the third tee during the third round of the Tournament of Champions golf event, Saturday, Jan. 5, 2019, at Kapalua Plantation Course in Kapalua, Hawaii. (AP Photo/Matt York)

Woodland stays in front with a big putt at Kapalua

By DOUG FERGUSON, AP Golf Writer
KAPALUA, Hawaii (AP) — One day, Gary Woodland pulled away with five straight birdies. The next day, all it took was one big putt.
The challenge now is to finish off the Sentry Tournament of Champions.
Woodland broke a tie with Rory McIlroy by making a 65-foot eagle putt on 15th hole, and he closed with one last birdie Saturday for a 5-under 68 that gave him a three-shot lead going into the final round at Kapalua.
Woodland has never won on the PGA Tour in the six previous times he had the 54-hole lead in stroke play. In his favor is the history at Kapalua. While the Plantation course lends itself to wild swings in scoring, no one has ever lost a three-shot lead after 54 holes since the winners-only tournament moved here in 1999.
“The difference is I’m a completely different player than I have been in the past,” Woodland said. “I’ve obviously been in the position multiple times. It’s nice to build off those and take certain things out of them. … I’m playing well enough where I don’t have to play conservative. I can attack and continue to trust what I’m doing and should be good.”
McIlroy played bogey-free for a 68 after he had to settle for pars on the two par 5s at the end. Still, he starts the new year playing in the final group, having not played a tournament in nearly two months.
“Another final group is great, especially coming off the back of not being able to play as well as I would have liked in final groups last year,” McIlroy said. “So to get myself right back in contention and see if I’ve learned anything from last year and try to put that into practice is great.”
Woodland was at 17-under 202, and would love nothing better than to secure another trip to Kapalua in the first tournament of the year.
Marc Leishman, who made a double bogey in the opening round and a triple bogey on Friday, limited the damage to only one bogey. He had a 68 and was well in range, four shots behind.
Xander Schauffele (68) and Bryson DeChambeau (70) were five back.
The only downer for Woodland was learning that his grandmother in Kansas had died Friday night. This is a family vacation for most of the Woodland crew — for Christmas, he flew out 11 relatives.
“She’s been downhill for a little while now,” Woodland said. “It’s been tough. And you try to prepare for that, but you never really can. Definitely will have a little extra emotion with me, but we’ll get through it.”
It was a tough day of work on the course, as the trade wind returned stronger than expected.
McIlroy managed to get through it without a bogey. He had a close call on the 16th, when he tried to atone for the missed birdie on the previous hole by going at the flag and landing just over the green. He faced one of the fastest chips on the course, down the slope toward the Pacific horizon, and left it 12 short. He made his par to at least stay in range.
McIlroy spoke earlier in the week about playing in the last group six times last year. One of those was the Masters, the missing leg of the career Grand Slam, when he started two shots behind Patrick Reed and never challenged. Another was the Tour Championship, where he was three behind Tiger Woods and didn’t give him much of a fight.
“I probably pushed a little too hard, and it didn’t really work out for me,” McIlroy said. “I just have to go about my business. I didn’t make a bogey today, so I’ll make that a goal tomorrow.”
It still will depend on Woodland, a three-time winner on the PGA Tour who wants more victories to show for his improved all-around game. His only mistake on Saturday was coming up just short of the green on No. 12 and missing a 5-foot par putt.
He made up for that with his eagle putt, laughing when it dropped, though he said it had nothing to do with surprise.
“I just saw somebody’s face in the background. They weren’t too happy that the ball went in, so it made me laugh,” he said. “I enjoyed that.”
The last two winners at Kapalua, Dustin Johnson and Justin Thomas, needed something special Sunday. Thomas shot a 70 and was seven behind, while Johnson had 69 and was eight back.
Brooks Koepka shot 73 and was tied for 29th. He needed a two-way tie for eighth to remain No. 1 in the world over Justin Rose, one of three eligible players for the winners-only field that is not at Kapalua this week.