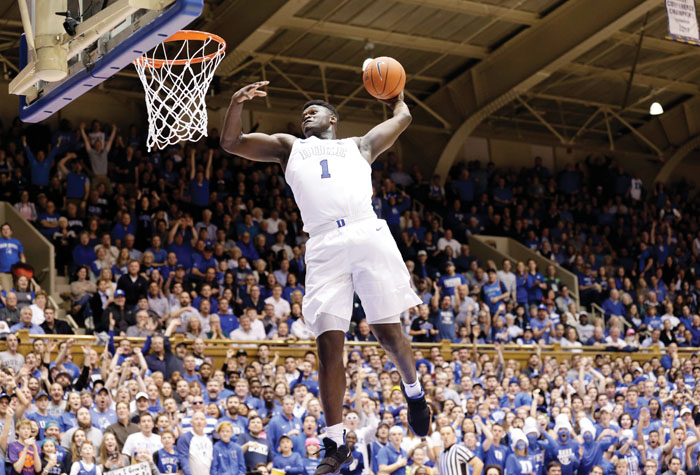 Duke's Zion Williamson (1) drives for a dunk against Clemson during the second half of an NCAA college basketball game in Durham, N.C., Saturday, Jan. 5, 2019. (AP Photo/Gerry Broome)

DURHAM (AP) — Zion Williamson took two dribbles in the open court, and inspiration struck: This was the perfect time to show off his 360-degree dunk.

In a freshman season full of highlight-reel plays for No. 1 Duke, this one might have been the most breathtaking.

“I said, ‘You know what? I’m wide open. Why not?’” Williamson said. “I did it, got high enough and it was almost like a layup.”

Williamson had 25 points and 10 rebounds in addition to that spectacular dunk, and the Blue Devils beat Clemson 87-68 on Saturday night in their Atlantic Coast Conference opener.

“There’s no ceiling on how many times he can twirl,” coach Mike Krzyzewski quipped, “as long as he puts the damned thing in.”

RJ Barrett, the ACC’s leading scorer, finished with 13 points while freshman point guard Tre Jones had 10 points and a season-best nine assists. Jack White added 12 points and Marquise Bolden had 11 for the Blue Devils (12-1, 1-0), who shot 48 percent and turned 19 Clemson turnovers into 27 points.

Playing their first game in 16 days, they needed roughly 20 minutes to shake off the rust before scoring the first 14 points of the second half to break it open and cruise to their seventh straight win.

Marcquise Reed scored 15 points, Elijah Thomas finished with 14 and Shelton Mitchell had 11, but the Tigers (10-4, 0-1) had their four-game winning streak snapped.

“In the second half, we just gave in,” coach Brad Brownell said.

Williamson — who was recruited hard by Clemson with his hometown of Spartanburg, South Carolina, is an hour’s drive from the Tigers’ campus — put on a show after halftime with a pair of slick drives down the lane for layup immediately before Barrett’s jumper gave Duke its first 20-point lead with just under 17 minutes left.

Clemson: The strength of the Tigers is their age and experience, with three graduate seniors and a fourth-year senior in the starting lineup. But that experience added up to yet another loss at Cameron Indoor Stadium, where they haven’t won since 1995 and where they’ve only beaten Mike Krzyzewski twice in nearly four decades.

Duke: ACC openers have been tricky for recent freshman-dominated Blue Devils teams — they hadn’t won one since the 2015-16 season — and this one was borderline tenuous for a half. Then the Zion Show got rolling, and it turned into yet another easy win.

They’ll be talking about Williamson’s 360 for quite some time. Barrett — who leaped with excitement in the backcourt as Williamson went airborne a few feet past the free-throw line — jokingly rated the dunk as a seven out of 10. Teammate Mike Buckmire, who sat next to Williamson in the locker room, received a high-five from him after he called it an eight.

What looked like an authoritative dunk at one end turned into one at the other. Clemson’s Aamir Simms skied to slam over White, but instead sent the ball hard off the backboard that it wound up hitting the floor near the 3-point line. Jones scooped it up and led the break the other way, delivering a behind-the-back pass to Javin DeLaurier for a dunk that made it 40-33 with about 45 seconds before halftime.

This one couldn’t have gone much worse for the fourth member of Duke’s freshman class: Cameron Reddish finished with six turnovers and four points on 1-of-8 shooting and missed all four 3s he attempted. Five of those miscues came in the first half when they seemed to snowball on him. “I think he’s just got to be stronger with the ball,” Krzyzewski said. “That’s an adjustment for all freshmen in the league. Tonight, we’re playing against men. He’ll be fine, and we have confidence in him, but he didn’t play well tonight.”