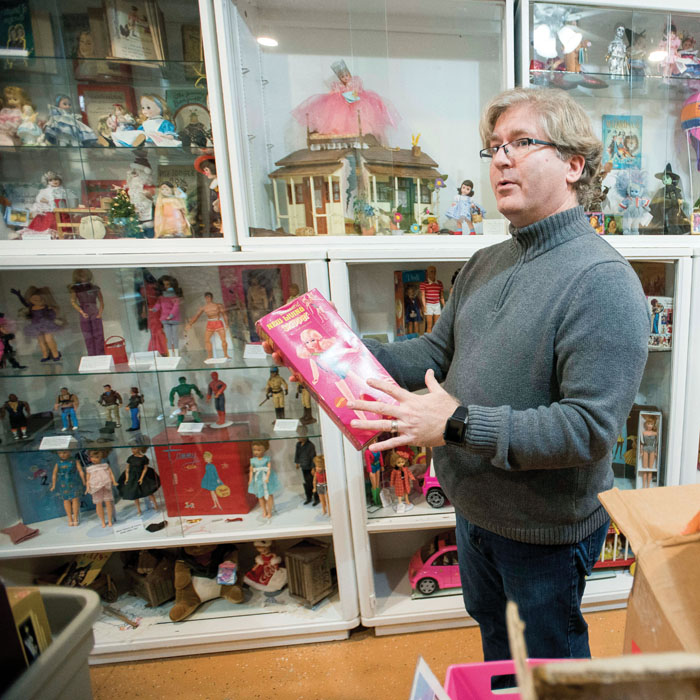 Bradley Justice of Durham is an avid Barbie collector who is helping prepare an anniversary exhibit at the N.C. Museum of Dolls, Toys and Miniatures in Spencer. Jon C. Lakey/Salisbury Post

1. Talking about resolutions for the new year, this public official in Rowan County said he or she has a single resolution each year. “I have a sticky note in my office, and it just has two words on it. It just says, ‘Do better.’ … I just want to do better. I think we could all do better.” Who said this?
A. Rowan County Commissioner Judy Klusman
B. Rowan County Commissioner Craig Pierce
C. Granite Quarry Mayor Bill Feather
D. Salisbury City Councilwoman Tamara Sheffield

4. In the end, the U.S. 4th Circuit Court of Appeals declared the Rowan County Board of Commissioners’ prayer practices unconstitutional, so the county now faces having to pay as much as $500,000 in attorney fees for the prevailing party, three Rowan County residents. To whom will the county be paying the other side’s legal fees?
A. National Center for Life and Liberty
B. Americans for Democratic Actions
C. American Civil Liberties Union
D. Christian Coalition

5. Alex Clark and his wife, Alisha Byrd-Clark, who together founded Gemstones Academy and COMPASS, were presented with keys to the city of Salisbury last week. What do their nonprofit organizations do?
A. Work with youths, particularly those at-risk
B. Provide mobile soup kitchens to feed the needy
C. Provide adult senior day care and programs for the elderly
D. Bring literacy programs to local churches

6. Former Salisbury police officer L.C. Underwood died of natural causes Dec. 30 while serving a life sentence for the 1993 murder of Viktor Gunnarsson, whose body was dumped in the mountains off the Blue Ridge Parkway. Though he was never charged, Gunnarsson was a prime suspect in what crime that made international headlines?
A. The assassination of Egypt’s Anwar Sadat
B. The killing of a Norwegian diplomat
C. A conspiracy to assassinate Moammar Khadafy
D. The assassination of Swedish Prime Minister Olof Palme

7. Jenny Lee was chosen as one of the Salisbury Post’s “10 to watch” in 2019. What is Lee’s job?
A. A Salisbury native, she’s the reigning Miss North Carolina.
B. Human resource specialist for the city
C. Rowan County planner
D. Executive director of Rowan County United Way

8. Knollwood Elementary School fourth-graders recently took a trip to the mountains of North Carolina. Which of these places was not on the students’ itinerary?
A. Biltmore Estate in Asheville
B. Chimney Rock
C. Linville Caverns
D. Grandfather Mountain’s Swinging Bridge

9. The Salisbury City Council decided Wednesday that it will set aside a period for public comment at what portion of its meetings?
A. Near the 6 p.m. start
B. At the end of the agenda
C. In the middle of a meeting, right before the first break
D. A time for public comment will now be allowed only at council work sessions, not at the regular first and third Tuesday meetings.

10. Bradley Justice of Durham was in Spencer last week to help plan an important milestone celebration for the Barbie doll at the N.C. Museum of Dolls, Toys & Miniatures. Come March 9, Barbie will be how old?
A. 40
B. 50
C. 60
D. 75