Tommy Tomlinson admits it’s ‘the biggest story of my life’ 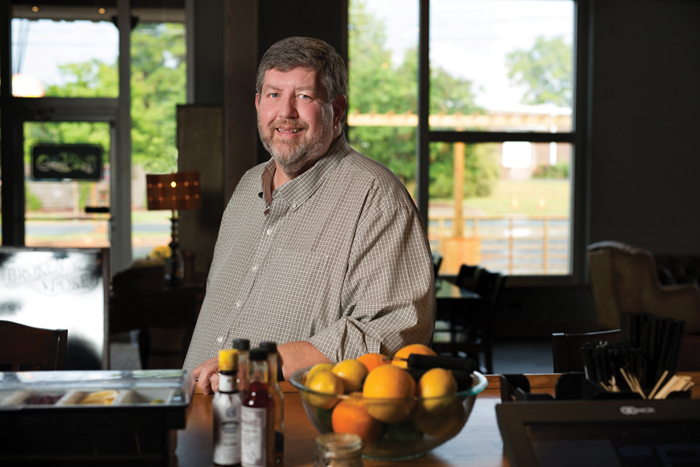 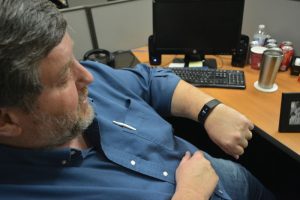 Tommy checks on his daily progress with his FitBit. Each day, he tries to put out more calories than he’s taken in, which has become the formula for his weight-loss success, he says.

Tommy Tomlinson is an award-winning writer who served as a longtime columnist for the Charlotte Observer. His stories have appeared in that paper and in publications across the nation. He now works for WFAE, Charlotte’s NPR radio station, where he hosts the “Southbound” podcast.

He writes in his new memoir that he’s spent a lifetime telling other people’s stories. But there’s one story he hasn’t told — until now. 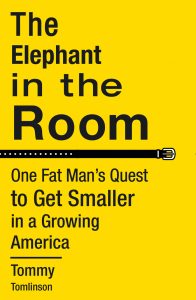 Book jacket: ‘The Elephant in the Room’

Tomlinson, who turned 55 on Jan. 4, chronicles the first year of his weight-loss journey in his new book, “The Elephant in the Room — One Fat Man’s Quest to Get Smaller in a Growing America.”

The death of Tomlinson’s sister, Brenda Williams, on Christmas Eve 2014, ultimately served as the catalyst to save his own life.

But anyone who’s ever tried to lose weight will tell you: It is not.

Being on the other side of the notebook is interesting, he says. “I’ve been interviewed several times for other stuff. But this time they’re asking about raw, intimate things about my wife and I. We had to decide what we were both comfortable with. We are erring on the side of honesty.”
Alix Felsing, his wife of 20 years, agrees.

“This book is really heartfelt,” says Felsing, 57, a former Observer editor who’s a consultant and executive coach. “Tommy is writing about things he’s been thinking about for a long time — the reasons for why he is the way he is. He is revisiting some really painful events in his life but in a very clear-eyed way.”

The vast majority of the material in the book is stuff he’s never told anyone, Tomlinson says. In 2006, he mentioned the idea of this book to his agent, Sloan Harris. It took him this long to get up the nerve to actually write the book, he says. “It took awhile for me to take a deep breath and decide I wanted to do it.”

Once he got past those first four words, he says, it got easier.

Tomlinson says he’s been successful losing weight because he chose a method that was sustainable for him. He wanted a plan that would bring him slow, steady weight loss, he says.

A big part of his success was finally kicking a fast-food addiction he’d had for years. On the day of our interview, it had been 1,000 days since he’d been to a fast-food restaurant.

“I feel like I’ve made good progress,” he says.

As he writes near the end of the book, Tomlinson’s ultimate goal is to weigh 230 — half his original weight. During a recent five-month period, however, he lost his mother, his father-in-law, and his best friend.

Understandably, he gained a bit of weight back during that time, but he’s already lost it. More importantly, he says, “At no time did during that period did I feel I was out of control with my eating.

It has been a rocky last year or so, but I feel like I’m back on top of things. After everything that’s happened, it’s highly unlikely I’m gonna go off the deep end again.”

Felsing says she’s never nagged her husband about his weight.

His weight, she admits, has always been a concern. “But I don’t want to spend our time together focused on his weight. I would rather focus on what we can do.”

That includes making healthier decisions about both their lives, she says. “His sister’s death came out of nowhere. We just did not see that coming.”

Since Tomlinson has lost weight, Felsing says that her husband sleeps better at night, and his stamina has improved. They frequently walk in their Charlotte neighborhood.

“We are able to go to events and go out and to go places that involve standing around, or walking, more easily that we did before,” she says.

Ken Garfield agrees.  Garfield, the longtime religion editor for the Charlotte Observer, is a writer and editor at Myers Park United Methodist Church. Until this month, he was the congregation’s communications director.

“It’s powerful stuff,” Garfield says of Tomlinson’s book, of which he read an early draft. “It’s something a lot of people deal with, so I think it’s gonna be huge.”
The two men overlapped at the Observer for many years, Garfield says. “He’s so versatile and he has such a powerful voice. He makes the connection with readers in such a visceral way.”

Still, Garfield notes, “Everybody who loves Tommy has always been concerned about his weight. He’s been dealing with emotions and eating his whole life.”

Pretty much everybody, right?

“We can all see ourselves in this book,” Garfield says. “That’s the power of this book.”