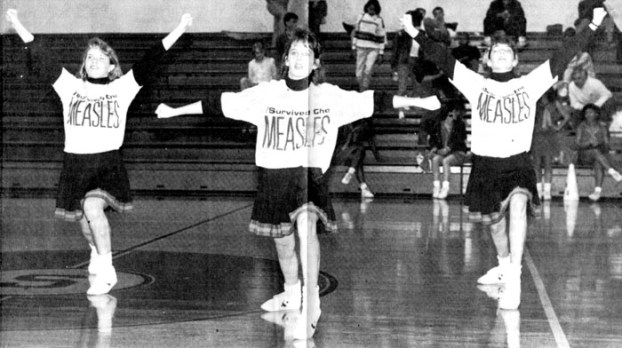 Wayne Hinshaw/Post file photo ... On Feb. 8, 1989, a day after the measles quarantine was lifted, Salisbury High School cheerleaders sported “I Survived the Measles” at halftime of the Hornets’ game against Lexington. Local sports had been shut down for six weeks. 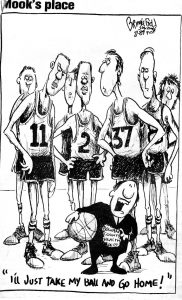 An editorial cartoon by Mark Brincefied, which was published in the Salisbury Post on Jan. 22, 1989. The measles epidemic quarantine began on Jan. 11 and was lifted on Feb. 7 of that year.

I watched some of that game on TV, while packing for a trip to the Bahamas. It was Dec. 31, and the flight to Nassau with the Catawba College men’s basketball team was scheduled for something like 6 a.m. on New Year’s Day.

I was the sports information director at Catawba and while it was a business trip, it was also a lucky second honeymoon. My wife, Toni, and I were married in April of that year and we took advantage of the great opportunity.

The week-long stay in the Bahamas included three games for Catawba and after each one, I called — that’s right, before faxing and email — The Salisbury Post with a recap and boxscore.

After the first game, which was on Tuesday of that week, I called in, speaking with legendary sports editor Horace Billings. After I reported the game info to Horace, he gave me a bit of news from Rowan County.

I’m going from memory, but Horace said: “D, this measles thing is something up here. Tell Sam that ya’ll might not be able to play when you get back.”

Of course, “Sam” was another legend — Catawba coach Sam Moir. Yes, the same coach whose name is on the floor at Goodman Gym, the one who has a great high school Christmas tournament named after him and the same one who belongs to eight halls of fame. He died last October.

I hung up the phone and went and found Coach Moir, who was sitting with his wife, Betty, on Prince George Wharf behind the hotel, the beautiful, blue Nassau Harbor behind him. I delivered Horace’s message and Sam, in his 29th year and already a national Hall of Famer (NAIA), laughed heartily.

I nodded in agreement and walked away, thinking Coach Moir was probably right. He was more powerful than any health department guy back home. We enjoyed the rest of the week and didn’t really give the measles any more thought.

There’s a thick file on the measles quarantine of 1988-89 in the Post’s archives. Going through the many clippings, the first sign of trouble (which, as a 29-year-0ld newlywed, I had been oblivious to) was included in an article that had published on Dec. 9 — long before our trip.

Post staffer Pam Moore, who would have countless bylines on the measles over the next three months, wrote a story that held the headline: “2,000 students to get measles vaccinations.” The first paragraph read, “nurses will begin vaccinating unprotected students to check a red measles outbreak that began last week.”

How had I missed that? Guess I had been too deep in the sports world at the time.

There were several more articles throughout December of cancellations of this and that, including the last day of the annual Christmas tournament.

On Jan. 3, the day Catawba fell to Northwest Missouri State, 101-100, in the Bahamas, a Post article reported that Wade Mobley, county schools superintendent, was canceling the next two weeks of sports action, at the request of the Rowan County Health Department.

That must have been what stirred Horace to mention it to me on the phone that same day.

Then on Jan. 11, three days after we returned from Nassau, the big headline on the front page of the Post spelled it out for everyone in the county: “Officials here impose quarantine.”

That was it until further notice. No public gatherings were allowed, including athletics and social events, from the YMCA youth leagues to Catawba and Livingstone colleges.

However, the public schools never closed from daily class schedules. Herbert Hawley, director of the health department, explained that most school students were likely vaccinated at 15 months or older and were considered protected.

So the quarantine was for games and events and was more about stopping the spread across Rowan’s borders — discouraging people who had never been vaccinated from coming to the county for sports and social events.

Fair or unfair, Hawley, unfortunately, became the face for the entire situation, due to what appeared to many as an inconsistent plan of action to deal with the measles. Looking back, I see now that he was just trying to do his job, in the middle of what had to have been a nightmare for him. But like many others, I didn’t see it that way then.

Hawley had been with the health department since 1968 and retired in 1992. Most never knew that Hawley was an accomplished artist and had numerous exhibitions of his paintings, including one at the Waterworks Gallery in 2004. He died in 2010 at 88 years old.

Ed Dupree, the Post’s assistant sports editor, also didn’t see things Hawley’s way in 1989, writing a column on Jan. 25, under the title,”Ban raises too many questions.”

Dupree was the Post’s high school sports guru (Mike London holds the title currently) and the stoppage of games made him a very unhappy camper. And Dupree, who died in 2017, was a bulldog when he got a hold of something. He did his research and talked to school officials in Harris County, Texas, where a similar measles outbreak had occurred — without the cancellations of games.

In the column, Dupree reported that in that Texas county, any school team that had a measles case reported, immediately saw the entire team vaccinated and essentially, moved on with its schedules.

Dupree closed the column with a very good point. Some of Catawba’s players were spectators at the first two days of the high school tournament in Goodman Gym. Then those same players journeyed to the Bahamas.

“I’m glad for Coach Moir and his players that their trip was not stopped,” wrote Dupree. “But it was perhaps the biggest oversight made by Bert Hawley, the Rowan County Health Department director, and other health officials.

“It was permissible for a Catawba basketball player, possibly exposed to the measles on Dec. 26 and 27, to travel outside the country, but not to play a Carolinas Conference game with nearby Pfeiffer. Makes you wonder, doesn’t it?”

Meanwhile, we got our hopes up that the quarantine would be lifted in short measure. Maybe Catawba’s season could continue. The record was stuck at 5-6 overall and 1-1 in the league. That record didn’t reflect how good that 1988-89 team could have been.

The Indians had started slow, but a mid-year transfer from Division I Oral Roberts, Boyce Cherry, was already making an impact. Cherry was a 6-9 man child, with a body like LeBron James. He was tough inside and could step back and drain 3-pointers.

Catawba had not seen the likes of Cherry since the early 1980s when other D-I transfers had led Moir’s teams to back-to-back NAIA national tournament appearances.

The frustrations mounted as one day, there was a story about the measles declining, then the next day’s paper reported another big outbreak. The quarantine continued. The Carolinas Conference office was beginning to stop asking if Catawba was going to be able to make up the missed games.

On Jan. 27, Catawba AD David Wood said that if the ban on playing games lasted into February, “we’d have to ask ourselves if it would be worth it to continue playing.”

Wood added that if Catawba could play by the start of February, the Indians could still play the second half of the league schedule, thus salvaging the season and earning a spot in the conference tournament.

The measles quarantine was lifted on Feb. 7, a week too late. Yes, the high schools did resume, but Catawba had missed too much of its schedule to satisfy the league office. That team’s record is forever just 5-6. Moir, who coached nearly 1,000 games at Catawba for 34 seasons (1960-94), compiled a record of 546-399. A safe guess: The measles epidemic probably kept Moir from hitting 560 victories.

The NAIA (Catawba was two years away from moving to NCAA II) granted the players an extra year of eligibility — if they wanted it. It worked out for future Catawba Hall of Famer Tracey Scruggs, who set the all-time assists record with his extra games.

Cherry, however, did not hang around. He played just the four games for the Indians and as far as I can tell, Cherry’s collegiate career was ended by the measles.

The Catawba women’s team, under the direction of Coach Gary Peters, 7-5. The women last played on Dec. 7, never resuming after Christmas break.

Pam Moore’s bylines on the measles epidemic continued into March and in December 1989, she wrote another article: “Measles: One year later — No guarantee that outbreak couldn’t happen again.”

By David Shaw sports@salisburypost.com SALISBURY —When ordinary would no longer do, the North Rowan boys basketball team became extraordinary. The... read more