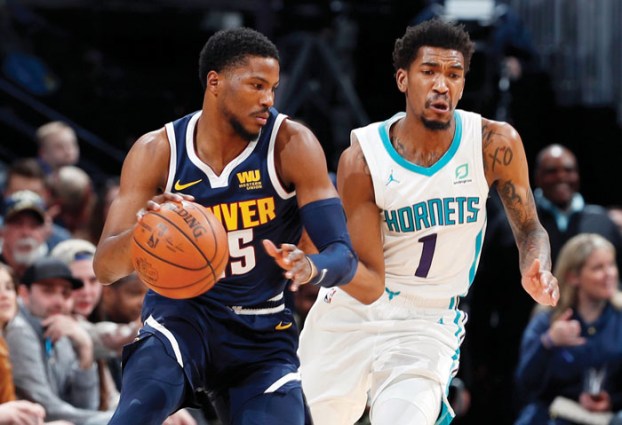 At 26-11, the Nuggets are off to their best NBA start in franchise history. This also marks the latest they’ve been in first place in the conference since March 16, 1977.

Jokic turned in another impressive stat line, also adding six assists, three steals and one blocked shot. He was 16 of 29 from the floor and 4 of 5 from the line.

Kemba Walker had 20 points for the Hornets, who kicked off a six-game trip. Bismack Biyombo added a season-high 16 points.

Trey Lyles and Millsap hit back-to-back 3-pointers early in the fourth quarter to give the Nuggets a 105-93 lead. Torrey Craig cemented the win with a dunk on a fast break with 1:50 remaining to extend the lead to 14.

Craig had the hustle play of the day late in the fourth, saving a ball heading out of bounds and winding up about five rows deep into the stands.

Malik Monk scored 12 of his 16 points in the second half, including a 3-point buzzer-beater over Murray to end the third that cut it to 89-84. Neither team was able to gain any sort of separation through three quarters, with Denver’s biggest lead eight points and Charlotte’s three.

Hornets: Biyombo was in the starting lineup with Charlotte C Cody Zeller out after he had surgery to fix a broken right hand. … G Jeremy Lamb missed a second straight game with a strained right hamstring. “He’s progressing well,” coach James Borrego reported. … F Marvin Williams was called for a flagrant foul when he tried to prevent a layup by Craig in the second quarter.

Nuggets: Denver led Charlotte in points in the paint by a 64-48 margin. … Had a season-high 31 second-chance points.

It was a Hernangomez family reunion as Nuggets forward Juancho Hernangomez faced older brother Willy, who’s a center for the Hornets. Juancho didn’t score in nearly 20 minutes of work, while Willy had 10 points in 15:35.

Willy Hernangomez didn’t play in their first meeting Dec. 7, when Juancho had 15 points in Denver’s 113-107 loss.

With the team playing well, typical starters Harris and Millsap are entering off the bench.

“Sometimes you don’t want to ruin a good thing, but the end of the day I know Paul and Gary are starters,” Nuggets coach Michael Malone said.

“When you have starters coming off your bench, you’re going to be at the top of most conferences,” Borrego said. “That’s what they have.”

Hornets: At Phoenix on Sunday night.

Nuggets: At Houston on Monday, the first of a two-game, back-to-back trip.