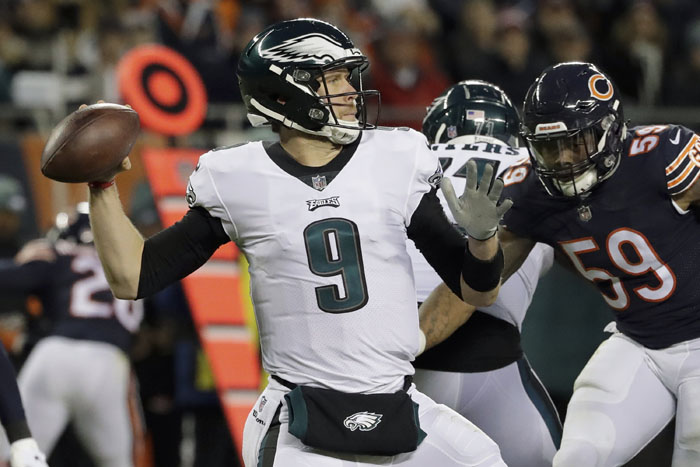 CHICAGO (AP) — The Eagles kept messing up. They’re simply a team that doesn’t give up.
Nick Foles hit Golden Tate with a 2-yard touchdown pass on fourth down with 56 seconds remaining against the NFL’s stingiest defense, lifting the Philadelphia Eagles past the Chicago Bears 16-15 on Sunday in the final wild-card game.
Former Eagles kicker Cody Parkey hit the left upright and then the crossbar with a field-goal attempt from 43 yards with 10 seconds remaining, silencing the raucous crowd.
“I think the big thing is, we saw some adversity tonight in the first half (and) I had a couple of turnovers,” Foles said. “I think the big thing is that no one loses faith, no one stops believing, everyone just keeps talking, keeps believing in one another, and we just rallied. Our defense really kept us in this game.”
The defending league champion Eagles (10-7) squeezed into the playoffs by beating Washington and having the Bears (12-5) help them by knocking off Minnesota in the season finale. Philadelphia thanked its benefactor with a 12-play, 60-yard drive on which Foles, the Super Bowl MVP last February, hit six passes.
Tate made a reaching grab in the right side of the end zone near the goal line.
“We found a way,” Tate said.
Philly plays at New Orleans (13-3) next Sunday. Chicago’s sensational turnaround season from last place to the NFC North title is over.
No team has repeated as Super Bowl champion since New England in 2004, and the Eagles are a sixth seed. The last sixth seed to win the NFL title was Green Bay in the 2010 season; the Packers won the NFC championship at Soldier Field that season.
These Eagles, led by Foles once again replacing an injured Carson Wentz, and a defense down to backups at several positions, seem to have that magical touch like last season.
It was a sizzling ending to a game marked by superior defense and several critical mistakes by the Eagles. They had to survive after Tarik Cohen, an All-Pro punt returner, took back the kickoff following Philly’s go-ahead score 35 yards. Mitchell Trubisky completed two passes to get the Bears close enough for Parkey. But his kick took a double deflection and fell harmlessly into the end zone.
He was 11 of 12 in the fourth-quarter on field goals before missing the biggest kick of his career.
“Obviously, we’re just hoping for a miss,” Foles said. “This was a hard-fought game. That’s an amazing team we just played against and it came down to the wire.”
The Bears are 1-15 all-time in playoffs when trailing after three quarters. They fell behind when Foles connected with rookie Dallas Goedert for a 10-yard touchdown in the third period that was set up by a 33-yard pass interference call on cornerback Prince Amukamara.
Although the Eagles outplayed the Bears in the first half, errors left them behind 6-3. A 15-yard personal penalty on Michael Bennett aided Chicago’s drive to a 36-yard field goal by Parkey, and a dropped potential interception in the end zone by Tre Sullivan allowed Parkey to make a 29-yarder as the half concluded.
Philadelphia also had an interception by Avonte Maddox deep in Chicago territory overturned by video replay.
Philly did score on its opening series of the game, a 50-yard drive to Jake Elliott’s 43-yard field goal. And again on its first possession in the third quarter as Goedert got wide open on a short post pattern behind Adrian Amos, who had an end-zone interception of Foles’ ill-advised throw in the second quarter.
Parkey also made 34-yarder early in the manic final quarter.
“We had a lot of fun and I love our guys to death,” Bears coach Matt Nagy said.

REID’S INFLUENCE
Both head coaches, Nagy in Chicago and Doug Pederson in Philadelphia, are Andy Reid proteges. That usually means lots of passing, and each team didn’t do much on the ground, combining for 107 yards rushing.
But Trubisky threw for 303 yards, going 26 of 43. Foles was 25 of 40 for 266 yards.

TURNOVERS
Teams rarely win when they are minus in turnover differential. The Eagles did, having two giveaways and no takeaways. Chicago led the NFL this season with 36 takeaways.

MASCOT REACTION
Chicago’s bear mascot had the perfect reaction to Parkey’s miss, falling flat on his back as he was kneeling behind the goalpost where Parkey’s kick failed.

UP NEXT
Eagles: Travel to New Orleans, where they lost 48-7 during the season.
___
More AP NFL: https://apnews.com/NFL and https://twitter.com/AP_NFL