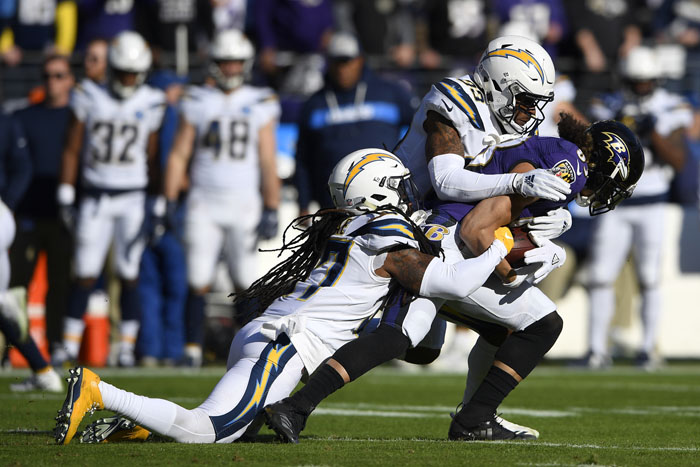 BALTIMORE (AP) — The Los Angeles Chargers kept Lamar Jackson grounded, and by the time the rookie got the passing game going it was too late for the Baltimore Ravens.
Michael Badgley kicked five field goals, and Los Angeles harassed and hounded Jackson during a 23-17 victory Sunday in the opening round of the NFL playoffs.
The Chargers (13-4) will next face the second-seeded New England Patriots (11-5) on the road Sunday. The Chargers last won two games during a single postseason in 2007, when the franchise was in San Diego.
Of course, going deep in the playoffs are old hat for the Patriots.
“Yeah, I mean, gosh, we know the run they’ve had,” Chargers quarterback Philip Rivers said. “It seems like forever. They’re always in these games and games beyond.”
Rivers went 22 for 32 for 160 yards for Los Angeles, providing just enough offense to help the Chargers get even for a 22-10 loss to Baltimore (10-7) just two weeks ago.
Badgley set a franchise record for field goals in a playoff game. He connected from 21, 53, 40, 34 and 47 yards.
The Chargers built a 23-3 lead in the fourth quarter before Jackson threw two touchdown passes to make it close. Given one final chance to complete the comeback, the 21-year-old looked every bit like the youngest quarterback to start an NFL playoff game when he lost the ball on his third fumble of the game.
Jackson finished 14 for 29 for 194 yards with an interception. He was sacked seven times.
“I wasn’t playing my game today. I’m ticked off about that, definitely,” Jackson said.
The AFC North champion Ravens were making their first playoff appearance since 2014 after Jackson led the team on a 6-1 season-ending run following an injury to long-time starter Joe Flacco.
In the days leading up to the game, Jackson — the 2016 Heisman Trophy winner — was lauded for the job he did to get Baltimore into the postseason. With the former Louisville star leading the way, the Ravens went on a tear by combining a time-consuming ground game with the league’s top-ranked defense.
Jackson finished with 54 yards rushing, but he was booed by many in the crowd of 70, 432 after the Ravens fell behind by 20 points.
“They were looking for better in us,” Jackson said. “We didn’t perform well. It happens sometimes.”
Jackson threw a 31-yard touchdown pass to Michael Crabtree to make it 23-10 with 6:33 remaining and tossed a 7-yarder to Crabtree with 1:59 left, but Baltimore’s last chance ended when Jackson fumbled after being hit by Uchenna Nwosu.
Baltimore finished with 90 yards rushing after averaging 229.6 with Jackson at the helm.
“We did a good job of staying in the rush lanes and containing him,” Chargers coach Anthony Lynn said. “The more times you see that offense, the better you’re going to do against it.”
The game was not without controversy.
Los Angeles used a 1-yard touchdown run by Melvin Gordon to take a 20-3 lead with 14:44 left. The score came one play after Gordon lost control of the ball at the goal line and the Ravens took it the other way for a touchdown, but he was called down by contact and a replay confirmed the call.
“He had control of the football as he hit the ground,” said NFL Senior Vice President of Officiating Al Riveron.
That pretty much ended any hope the Ravens had of winning their first home playoff game since the 2012 season. Baltimore had won five straight in the wild-card round under coach John Harbaugh.
At halftime, Jackson was 2 for 8 for 17 yards and an interception for a 0.0 quarterback rating. Los Angeles led 12-0 at the break, marking the first time in franchise history the Ravens were blanked in the first half of a playoff game.
The Ravens fumbled three times during their first eight offensive plays, losing the last one by Kenneth Dixon on a tackle by Melvin Ingram at the Baltimore 15 to set up Los Angeles’ first field goal.
The Chargers then used a 33-yard punt return by Desmond King to set up a 53-yard field goal for a 6-0 lead late in the first quarter.
An interception by Adrian Phillips led to another field goal, and Badgley made it 12-0 with another 3-pointer on the final play of the first half.
Ingram finished with seven tackles, two sacks, a forced fumble and a fumble recovery.

SUGGS TO RETURN
After the game, Baltimore linebacker Terrell Suggs said he intends to return for a 17th season.
“Absolutely,” he said. “I would love it to be here. I would like to be a Raven life-timer.”

LOOSE BALL
Jackson fumbled on Baltimore’s opening possession, but picked it up himself. The same thing happened in the second series before Dixon lost the ball. Jackson has fumbled in nine straight games.

SAN WHO?
A lot of people have had trouble adjusting to the phrase “Los Angeles Chargers” because the team spent so much time in San Diego.
But referee Clete Blakeman put a new twist on it, calling them “San Francisco” on the loudspeaker.

INJURIES
Chargers: CB Brandon Facyson missed the second half with a concussion.
Ravens: DT Michael Pierce hurt his elbow in the third quarter. … CB Tavon Young was on the inactive list with a groin injury.

UP NEXT
Chargers: The Chargers are 0-7 against Tom Brady and the Patriots, including playoffs, since Rivers became the starter in 2006.
Ravens: Head into the offseason with Harbaugh being assured he will return in 2019 and with Flacco likely headed elsewhere.