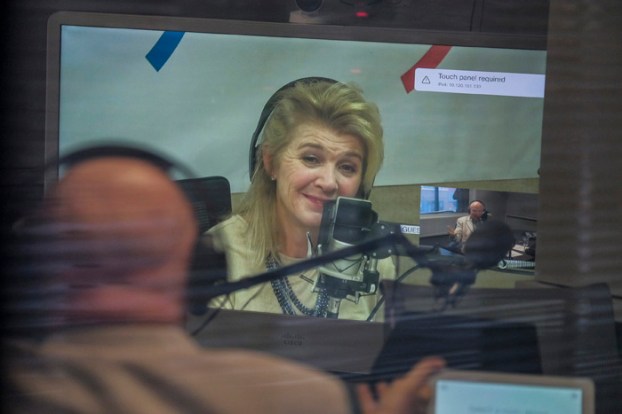 Mel Pine, foreground, in the District of Columbia and Marty Handlon in Alabama participate in StoryCorps program to bring together people with differing views. Jahi Chikwendiu/Washington Post

The quixotic movement to get opposing voters to talk

Kristy Kaufmann shifted nervously in her seat. On the computer screen in front of her, in a Washington radio-station studio, sat Al Wood, a man she had never met, beamed in from Alabama.

Kaufmann, 48, had her blond hair pulled into a taut high ponytail, while a gauzy scarf was wrapped stylishly around her neck. Wood, more formal in his black suit and crisp blue tie, was, at 64, from a different generation, one that watched the Vietnam War on TV. They’d ended up face-to-virtual-face last month because of a national effort to unite them; the only thing they knew about each other was the very significant way that they were different — and that it didn’t mean they couldn’t get along.

Kaufmann, a Democrat, took a breath. Her upbringing “definitely wasn’t one party of another, but it was definitely about equality and justice,” she said. She told Wood the ways her life had been unconventional and how, with two black adopted siblings, she had grown up in a family that was racially mixed before most people had seen such a thing. How she graduated from Berkeley, and one night in Las Vegas she met a man who would turn the free spirit into an Army wife.

Wood, who casts his votes for conservatives, nodded warmly, his expression blurred slightly over the digital airwaves that carried him into this small gray room in the heart of the swamp. He was military, too, he told her. Army, he said with a smile when she pressed. It was an experience that had exposed him to all kinds of people, too. In his thick, friendly drawl, he explained that he was having this conversation because he believed the world has misconceptions about Birmingham.

He and Kaufmann were there, too, because of StoryCorps’ new effort to bring Americans with differing political views together, to encourage them to see one another not as those who would build a wall and those who smugly believe they know what is best for the country, but as people.

Here in this booth, would they? Could they?

Across the nation, well-meaning people who’d like to repair a deeply fractured America are attempting to bridge divides. To put Hillary voters and Trump voters and maybe an immigrant or two in a room and, to quote that great peacemaker Tim Gunn, make it work.

What they want, more than anything, is a return to civility. An end to polarization. And if not that, detente. For Democrats and Republicans to sit side by side on a plane or dine in a restaurant without anyone having to summon the police.

In addition to StoryCorps, there’s the People’s Supper, which uses the dinner table as a place to gather opposing partisans and get them talking. Better Angels tries to repair democracy with more of an air of formality, holding workshops to connect rival voters. In Wisconsin, where fewer than 23,000 votes separated Donald Trump and Hillary Clinton in 2016, the Milwaukee Journal Sentinel and other organizations have teamed up to host “both sides” discussions, too. There is even Glenn Beck, reincarnated as a Never Trumper, asking ex-Facebook friends and entrenched partisans to reconsider their severed ties and come together once again.

Often, the only rule with these attempts to reunite Americans is that politics — the very thing that has the power to trigger, to turn the friendly chat venomous — is off the table.

But if you can’t change anyone’s mind, what is this all about?

If there is an “us” and a “them,” these efforts aim to blunt our sense of it, says Chris Bail, a sociologist who leads Duke University’s new Polarization Lab. Social scientists like Bail have a name for the theory that underpins these attempts. It’s called the contact hypothesis, and it suggests that healthy, normal interactions with those unlike ourselves actually can help us abandon our prejudices.

StoryCorps wasn’t always focused on connecting partisans. It launched in 2003, setting up a recording booth in Grand Central Station to document interviews with regular people, or at least New Yorkers. More booths in other cities followed, and soon, it had accumulated stories on every subject you can imagine, with many filed away for posterity in the National Archives.

Then came the presidential election. And the family warfare over Thanksgiving turkey. And the Trump divorces.

So last year, StoryCorps decided that it, too, would try to make Americans talk again.

“Our dream, which is lofty, is to try and convince the country that it’s your patriotic duty to see the humanity in people we disagree with,” says StoryCorps founder Dave Isay. The effort will continue, he says, until we no longer need the reminder.

There’s no telling when that day might come. Increasingly, Americans are conflating their politics with their very identities, and it’s affecting the discourse in unprecedented ways, says Alexander Theodoridis, an assistant political science professor and polarization expert at the University of California at Merced.

“That,” he says, “makes it harder to imagine how this gets fixed.”

The nation’s system of governance rests firmly on the premise of compromise. Perhaps that explains all the earnest efforts to try. But what do the experts make of them?

“I’m not going to say it’s not worth trying,” muses Theodoridis. “I am not especially optimistic that it is going to save us.”

Many blame the demise of civil political discussion on social media’s echo chambers and the internet’s tendency to encourage us to say whatever strikes us. Today, we are exposed almost exclusively to messages we agree with, by our own design.

“Online, it’s either neutral or total outrage,” says Katherine Wilson, executive director of the Zeidler Center for Public Discussion, which helps to facilitate the “red-blue” talks in Wisconsin. “You’re not looking someone in the eye, and so it’s easier to lash out, because the repercussions are a whole lot fewer.”

But Wilson worries that some of these efforts have the potential to do more harm than good.

“What is going to happen when people get to the table?” she asks. “What happens is a hundred-year-old, outdated method of convening community is used — like the town hall. They’re not effectual, people aren’t listening and, you know, there’s three minutes of screaming at the panel.”

But in the studio in Washington, a full 45 minutes had passed, and Wood and Kaufmann were still talking, all the while skirting the elephant (and the donkey) in the room.

“Al,” Kaufmann asked, “as a grandfather, what do you hope for your grandchildren?”

He smiled. “It goes back to the calling to be here. It would be nice to impact the world. It’s probably not going to impact the country. But I have a feeling my grandchildren … if they do decide they want to stay here and raise their families  … I want to do everything I can to make Birmingham all that it could be for them.”

Their time was up. “It was really a pleasure getting to talk to you,” Kaufmann told him.

In Alabama, Wood smiled and nodded. “We got along too well,” he joked. “Maybe we should have had a little more friction.”