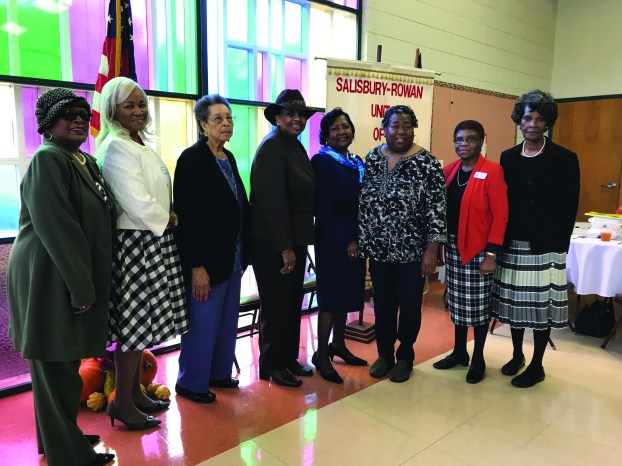 Salisbury Rowan Church Women United celebrated the World Community Day at Milford Hills United Methodist Church on November 2, 2018 with the theme, Reaching For Wholeness. Approximately 120 women and men attended the luncheon celebration.  World Community Day has been celebrated since 1943. It was birthed at a time of grave concern for world peace, with Eleanor Roosevelt as a guiding force.

The Key Woman Award was initiated and awarded for the first time to recognize women who are leaders in their local churches. Jean Kennedy, presented three women who were nominated by their local church: Eugenia Caldwell, Ardis Chapel A.M.E.Z; Addie Brown Hargrave, Jerusalem Baptist and Phyllis Thomside, St. Luke Baptist.

The next meeting of the Salisbury Rowan Church Women is January 13 at 3 pm at Southern City Tabernacle A.M.E.Z, 940 S. Long Street, East Spencer. New officers will be installed and the Valiant Woman Award will be presented. Refreshments will be provided. All are welcome to attend.

Sent from my iPhone