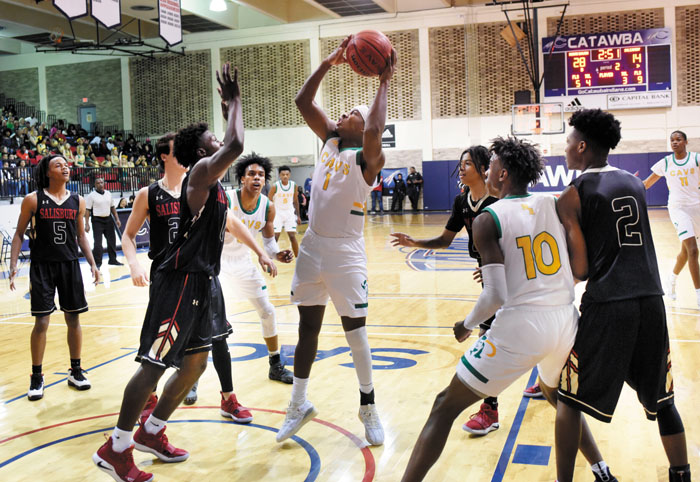 SALISBURY —When ordinary would no longer do, the North Rowan boys basketball team became extraordinary.

The Cavaliers found a gear that’s been missing and avenged their hard-to-swallow Christmas Tournament loss to Salisbury on Saturday night — and did it convincingly.

“They got to go into the championship game and we got to go to the consolation rounds,” North coach Jason Causby said at Catawba’s Goodman Gym, where the Cavs prevailed, 69-38, in a one-sided rematch. “We weren’t happy at all and we kicked our guys tails in practice this past week. It was the hardest four days of the year for us.”

North (9-2) was rewarded for its diligence and effort. It scored the game’s first 10 points, built a 19-point halftime lead and was never threatened by the unplugged Hornets (8-4) — a squad that had won six of its past seven games, including a 59-54 nod over North on Dec. 28.

“I didn’t have this team prepared to play,” said Salisbury coach Bryan Withers, who blamed the crash on pilot error. “It’s that simple. The effort wasn’t there for us, and that’s on me. This game was a lot more physical than the last time and we just backed down. That’s what disappointed me and that’s why I’m saying this was my fault.”

North’s suffocating 1-3-1 defense shared the blame, limiting Salisbury to 11 field goals — and none until sixth man Jacquez Smith came off the bench and drained consecutive 3-pointers late in the opening quarter. “We just wanted this one bad,” said North senior Derrick Page. “We were ready for anything. It’s a rivalry and always a prime-time game.”

The centerpiece was North’s Brevin Goodlett, a 6-foot-4 senior forward who seemed to play with wings and scored a game-high 24 points. He soared through the lane for a runaway layup with 1:21 remaining in the first half, then stepped back and caught nothing-but-nylon on a 14-foot jumper that put the Cavs up 35-18. In the third period, Goodlett drained back-to-back splashdowns — one from the left side and one from the right — as North’s lead ballooned to 53-26.

“We personally challenged him before this game,” Causby noted. “We felt like he kind of disappeared in the first matchup with Salisbury. He was passive and kind of floated around on the wings. Before tonight’s game, I got in his face and said, ‘You’ve got to give me something. What are you going to do?'”

The answer was reassuring for Goodlett, who tossed in 29 points in Friday’s win against West Montgomery and had a 33-point outpouring in a Dec. 7 YVC triumph over Albemarle. “There was no letting up tonight,” he said. “I came out and attacked the glass, attacked the basket and kept it going.”

Page, who finished with 12 points, smiled when asked about Goodlett’s re-emergence. “Once he knows he can’t be stopped,” he said, “he’ll become one of the best players in the county. He’s already showing us how good he can be.”

Smith paced the Hornets with 10 points, but Withers felt his team’s glacially slow start was pivotal.

“We’re trying to find a lineup that can score,” he said. “We’re falling behind in every single game. Think about it, every game we can’t get it going. We’re not shooting the ball very well and need to make some adjustments. That’s on us, the coaching staff, because we can’t keep starting out this slow.”

North led by as many as 35 points when reserve guard Russell Bacon made a steal and coasted home for an uncontested layup with 1:28 to play.

“Sometimes when it’s your night, it’s your night,” Causby shrugged afterward. “We shot the ball well and didn’t play outside of ourselves, which sometimes we do. We go for the spectacular play instead of the smart play. But tonight, we just did everything we’re supposed to do. We stayed home and were methodical about it.”

That may sound ordinary, but this evening was anything but.

NOTES: Each team made four 3-pointers. Salisbury received two from Smith and two from Tre Carlton in the fourth quarter. Goodlett buried three long balls for the Cavs and Denario Robinson one. … There were three technical fouls assessed — two against North. … Salisbury hosts North Davidson in a CCC showdown on Tuesday. North carries a two-game winning streak into Tuesday’s YVC match at Gray Stone.