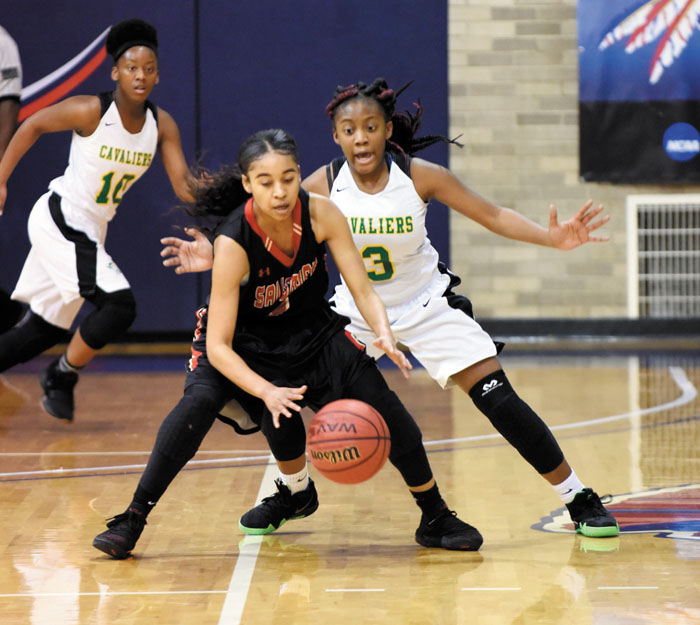 Fulson, a junior who was second team all-county last season, was out of town due to a death in her family.

That meant more responsibility for senior guard Chantal Robinson and freshman guard Rachel McCullough. They responded with good games for the Hornets in a 48-29 non-conference victory.

“Coach said we had to step in tonight and handle the ball,” Robinson said. “I enjoyed it.”

Robinson accounted for eight points and six rebounds and was usually the most aggressive player on the floor.

“Coach wanted us to shoot fewer 3-pointers and attack more,” Robinson said. “She said if we attacked, they were going to foul us.”

Salisbury coach Lakai Brice did some tweaking to the Hornets’ approach after a 57-51 loss to East Davidson on Friday. There was a large foul disparity in that game. Salisbury didn’t get to the foul line often enough and tried to change that with patient passing and aggressive drives on Saturday.

“Not having Anayia is a tough loss, but Chantal and Rachel did a good job,” Brice said. “Chantal is just so fast that the only problem we have with her is getting her to slow down a little bit. People think of Rachel as a shooter, but she can handle the ball. Those two controlled the game pretty well.”

The Hornets beat North for the seventh straight time.

Senior 6-footer Bryanna Troutman dominated early for the Hornets (10-2), blocking six shots, scoring six points and grabbing four rebounds in the first quarter, as the Hornets breezed to a 15-5 lead. Troutman sat out the second and fourth quarters. She finished with 10 points, eight rebounds, six blocks and four assists.

The first two points of the game came on a Salisbury transition bucket that Troutman triggered with a block and finished after a pass from McCullough. A strong drive by Robinson right down the lane made it 4-0, and the Hornets were on their way.

“Bryanna probably could’ve had a triple-double or a quadruple-double tonight if she’d played more,” Brice said. “She’s not going to score huge points because she’d rather shoot than pass. We wish she would take over more than she does, but that’s just not her personality. What she does really well is fill up the stat sheet in every category. Across the board.”

North Rowan (5-7) had an awful time scoring early. Troutman was blocking every layup attempt, and nothing was falling for the Cavaliers from outside.

“We played one of our better games Friday (North won at West Montgomery by 15 points), but this was a rough one for us,” North coach Lamar Wilkerson said. “The positive is that we never gave up and never let up. We were still hustling down to the end.”

That was true. North’s Aubree Cain made maximum effort trying to save a ball under the North hoop with one second left on the clock.

North was down 22-7 with 1:25 left in the second quarter when Natavia Taborn finally got the Cavs’ first bucket on a fast-break layup.

For the game, North made just seven field goals, with Taborn, who scored 14, making five layups. Hannah Wilkerson, who scored 10, made a layup and a twisting 6-footer in the lane. Other than free throws, that 6-footer was the longest successful shot by the Cavaliers.

McCullough made the game’s only 3-pointer to open the second half. That shot gave the Hornets a 25-12 lead. It was 36-14 just a few minutes later after a three-point play by Jaleiah Gibson and a tough finish by McCullough as she was being fouled on a break.

Both of Salisbury’s freshmen played well. McCullough scored seven. Gibson had seven points and 11 rebounds and gave the Hornets some inside power even when Troutman was sitting down.

“We had a lot of different people score tonight,” Brice said. “We did a lot of the things we wanted to do. We passed well and we got to the rim a lot. It was a good bounce-back game for us after a tough loss.”

North Rowan is contending in the 1A Yadkin Valley Conference and plays at Gray Stone, one of the league’s better teams, on Tuesday.

Salisbury is home Tuesday in the 2A Central Carolina Conference against a North Davidson squad that is getting a ton of points from freshman Emily Hege.