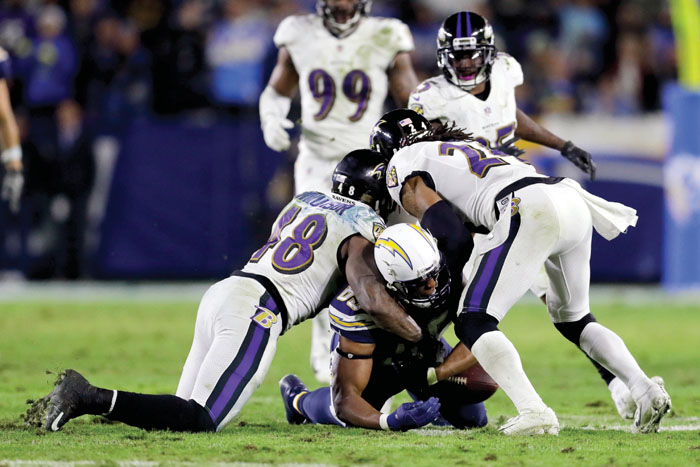 FILE - In this Dec. 22, 2018, file photo, Baltimore Ravens inside linebacker Patrick Onwuasor, left, and cornerback Brandon Carr force a fumble by Los Angeles Chargers tight end Antonio Gates during the second half in an NFL football game, in Carson, Calif. Some juicy rematches highlight wild-card weekend, in which, well, just about any of the eight teams advancing wouldn't be a surprise. Seattle beat Dallas early this season, and Baltimore handled the Los Angeles Chargers late. The Colts and Texans split two games. Only the Eagles and Bears didn't face off.(AP Photo/Marcio Jose Sanchez, File)

Some juicy rematches highlight wild-card weekend, in which, well, just about any of the eight teams advancing wouldn’t be a surprise.

Seattle beat Dallas early this season, and Baltimore handled the Los Angeles Chargers late. The Colts and Texans split two games. Only the Eagles and Bears didn’t face off.

“That was a different time of the season,” says Seahawks defensive coordinator Ken Norton Jr., who played for Dallas. “I think we both were at different places in our growth for the season. I think we’re both two different teams right now.

All eight teams do in a round with nothing but toss-up games.

The action begins with the two AFC South teams meeting in Houston on Saturday afternoon. The scene shifts north and west in Texas to Dallas for the prime-timer between the Seahawks and Cowboys.

On Sunday, the Chargers come across the country to Baltimore, then defending champion Philadelphia is at Chicago.

Way back in the first half of the season, these were struggling squads. Houston lost its first three games before reeling off a nine-game winning streak to surge to the top of the division. Indianapolis was 1-5 and has lost just once since Oct. 14, when it fell to the Jets, of all people.

“It feels like we’ve been playing in the postseason for quite a while now and I don’t think anybody’s approach will change in this locker room,” Andrew Luck says. “If you’ve played five, six, seven years in this league, you’ve overcome something. So there are a lot of folks who have overcome a lot.”

The Colts don’t let any defenders get to their quarterback, a stunning turnaround. Last season, which Luck missed with a right shoulder injury, Indy allowed 56 sacks, most in the league.  In 2018 with Luck: 18, an NFL low.

Neither team allowed a 100-yard rusher in 2018. Texans DE J.J. Watt , who along with Luck is a leading contender for Comeback Player of the Year, had an AFC-leading 16 sacks, 25 quarterback hits, 18 tackles for losses and forced a career-high seven fumbles, which tied for most in the NFL.

“To be able to get back to the top level of the game and know that I still have things to improve on and things that I want to get even better at, it’s exciting,” Watt says.

The Seahawks’ 24-13 win vs. the Cowboys got them back on track on their way to an unexpected playoff berth in a rebuilding year.  Seattle’s the first team with a 1,000-yard rusher (Chris Carson) and three men with at least 300 yards on the ground since the 2001 Steelers, and led the NFL in rushing. The Seahawks also led the NFL with a plus-15 turnover margin; their 11 giveaways tied for third fewest in league history.

But Dallas, which has lost three straight to Seattle, with one touchdown scored in total, was 7-1 at home this season. It also will run the ball first with Ezekiel Elliott.

Two weeks ago, the visiting Ravens beat LA and moved atop the AFC North, which they then clinched last Sunday. Now comes a redux, and the Chargers will have top running back Melvin Gordon back, a real boost.

They will need a balanced offense, with Gordon’s running complementing the passing of Philip Rivers, and a defense that can solve the speed and moves of Baltimore’s Lamar Jackson. Since Jackson replaced an injured Joe Flacco at quarterback, the Ravens are 6-1. Jackson and fellow rookie Gus Edwards give them a formidable running game to go with the No. 1-ranked defense in yards.

Thirty years ago, they played the “Fog Bowl” at the old Soldier Field. There isn’t a whole lot of clarity about this matchup, either.

The Bears, paced by a strong version of the Monsters of the Midway, have been the better team all year. But they are generally playoff newbies, and they face perhaps the most resilient team in the league.

Philly has been ravaged by injuries, yet here it is, making big plays on both sides of the ball thanks greatly to the veterans who had such a big role in its roll to the title a year ago: Nick Foles, Zack Ertz, Lane Johnson, Fletcher Cox, Malcolm Jenkins. The Eagles still have to produce on the field, but their credentials are valid.

“I know how our team has really fought this last month of the season, last six weeks,” coach Doug Pederson says. “And it does give you a little comfort knowing that we’ve kind of went through this grind and we’re here now and we have to continue to grind and continue to work.

“But I don’t think it’s any easier. It’s a different team again. Different set of circumstances. We have to travel. If we’re fortunate to win, we have to be on the road again. It feels different, but the excitement is the same.”

There’s no shortage of excitement in Chicago, either. Under first-year coach Matt Nagy, the Bears have moved from last place in the usually difficult NFC North to the top.

“I would say last year when we were playing good football, even though we had struggles within the team and struggles would be, you know, everything else was going haywire around us,” DT Akiem Hicks says, “but we were able to pull together and keep fighting. And there was no quit, and you saw that this year when we got into last minutes of the game and still fighting and coming up with those wins. You could tell that guys have that fight in them.”