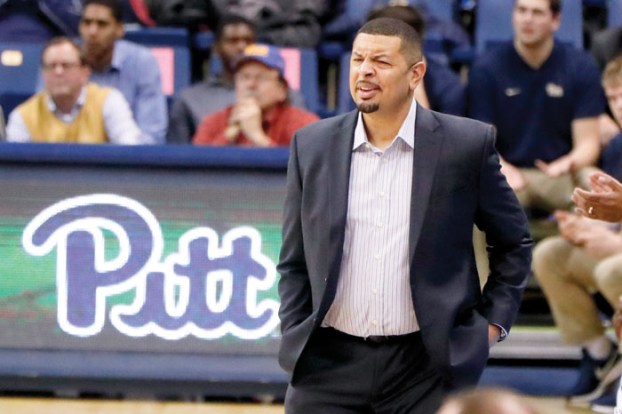 FILE - In this Dec. 3, 2018, file photo, Pittsburgh head coach Jeff Capel watches as his team plays against Niagara during the second half of an NCAA college basketball game in Pittsburgh. So far, in his first-year at Pitt, Capel has brought renewed energy to the program. The real challenge, however, begins on Saturday as the Panthers open ACC play against North Carolina.(AP Photo/Keith Srakocic, File)

Panthers ride optimism into ACC opener against No. 15 UNC

By WILL GRAVES, AP Sports Writer
PITTSBURGH (AP) — Jeff Capel turned the page quickly. His players still in their uniforms after Pittsburgh completed its non-conference schedule with a victory over Colgate last weekend, the first-year coach told his club that all the progress it made during a competent and occasionally compelling opening 13 games of the season no longer mattered.
The real metric on whether the rebuilding project Capel took over in April truly has traction will be determined over the next two months when the almost completely overhauled Panthers (10-3) try to end two years of misery in the Atlantic Coast Conference.
“That’s the first thing he said,” senior guard/forward Jared Wilson-Frame said. “He just let us know, in a motivational way, too: This is what we came here for. This is what we prepare for and this is what we’re trying to change the culture for.”
The process starts in earnest on Saturday when 15th-ranked North Carolina (10-3) visits the Petersen Events Center. The first sellout in nearly two years is expected, a sign Capel’s optimistic message and his team’s energetic play has caught the attention of a fan base that largely stayed away during Kevin Stallings’ brief and nightmarish tenure.
“We want to give them something to feel a connection with,” Capel said. “I think we’ve done that so far. Hopefully, Saturday is another step in that direction.”
About that. Pitt hasn’t won an ACC regular-season game since Feb. 18, 2017, when it beat Florida State, a span of 686 days. The only player currently on the roster with a victory over an ACC school is junior guard Malik Ellison, who played at St. John’s when the Red Storm knocked off Syracuse twice.
While Capel joked “it probably would help more if I could get out there and play” the former Duke star and longtime assistant under Mike Krzyzewski has far more experience facing the Tar Heels than anyone else affiliated with the program save for younger brother Jason, a four-year starter for North Carolina from 1998-2002 who now serves as Jeff Capel’s top lieutenant.
And though Capel can talk all he wants about how facing the Tar Heels is just another game, he knows his players won’t buy it.
“That’s not going to happen,” he said. “I understand that. We have to treat it as much as we can like (another game) and hope that the gravity of the environment doesn’t overwhelm us.”
Something that happened with alarming frequency for Pitt last season. The Panthers went winless in league play, with 15 of the 19 games decided by double digits, including a 31-point blowout in Chapel Hill. Only four Pitt players who saw action then will be in uniform on Saturday. The mass exodus has allowed Capel to start over quickly.
The Panthers rely heavily on freshmen guards Xavier Johnson, Trey McGowens and Au’Diese Toney. What they lack in experience they’ve made up for with production and a dash of swagger. Johnson, who leads Pitt in points and assists, is well aware of his team’s recent history, even if he had nothing to do with it. He doesn’t consider it a burden.
“I want to be part of the team that ends the losing streak,” Johnson said. I really don’t have a losing streak against me, but my first game, don’t want to lose an ACC game period, that’s my goal.”
Johnson faced North Carolina freshman Coby White when both played AAU ball, a game Johnson pointed out with a smile that his team won. The odds will be considerably longer this time around.
The Tar Heels are bigger, deeper and more talented than the undersized Panthers. Their leading scorer is 6-foot-8 senior Cameron Johnson, who spent three years at Pitt before heading to North Carolina as a graduate transfer in 2017. Cameron Johnson, who is from the Pittsburgh suburbs, is likely to receive a hostile welcome from Pitt’s raucous “Oakland Zoo” student section. In a way, it’s tangible and audible proof of the inroads the Panthers are making off the court.
Now comes the hard part: trying to do the same on it. They won’t lack for confidence.
“We know we’re at this level,” Wilson-Frame said. “We know we’re supposed to be on the court with them. We have the same (ACC) logo on our chest, all of us do. It’s just a game and we’re excited to play against them.””
___
More AP college basketball coverage: https://apnews.com/Collegebasketball and http://twitter.com/AP_Top25

Nauseating or just right? NFL officiating in the crosshairs

By TIM DAHLBERG, AP Sports Columnist Mike Pereira was in his customary spot next to Troy Aikman in the Fox Sports... read more