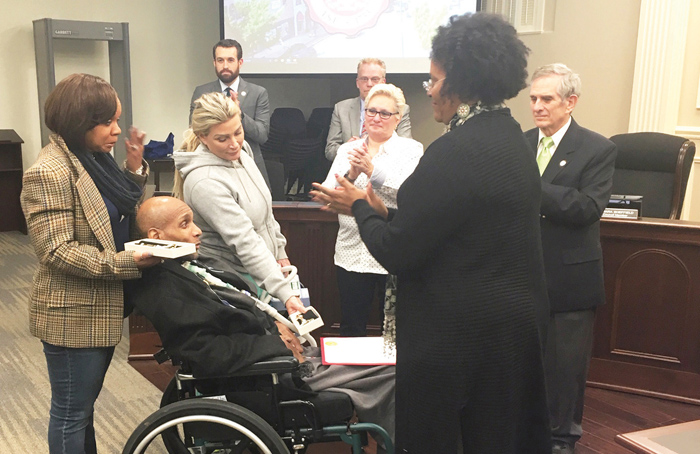 Alex Clark and Alisha Byrd-Clark of Gemstones Academy and COMPASS received a key from the city for their work helping youth in the community at Wednesday's city council meeting.

SALISBURY — Despite his ALS diagnosis in 2015, Alex Clark and his wife, Alisha Byrd-Clark, continue to mold the minds of youths in the community.

For their work, Clark and Byrd-Clark, founders of Gemstones Academy and COMPASS, were presented keys to the city at Wednesday’s City Council meeting.

“On behalf of the city and the City Council, it is an honor to present you the key to the city,” Mayor Al Heggins said. “We just thank you for everything you have done to make this community a stronger and healthier and more inclusive and compassionate community for our youth.”

Byrd-Clark said she was speechless when she was presented the key.

“I’m grateful that our work is being recognized in the community,” Byrd-Clark said. “It means a lot.”

Clark said it’s nice to be acknowledged but, without the recognition, the pair would continue efforts to encourage youths in the community.

“We don’t do it in order to be recognized,” he said. “If we’re acknowledged, that’s great. If not, we’re still doing what were supposed to be doing because we love our children.”

Clark said he hopes the honor can bring increased awareness to the work of Gemstones Academy and COMPASS, which, in turn, will encourage more volunteers, partnerships and donations, both monetary and to the food pantry.

At Wednesday’s meeting, Clark was confined to a wheelchair and using a tracheostomy. Clark said even as he’s in and out of the hospital he stays focused on the children served by the two organizations.

“All of it with ALS,” Byrd-Clark said. “We have no excuses. He inspires me every day.”

The two issued a call to action, saying if they can still give back, others can as well.

“They’re great folks,” Councilwoman Tamara Sheffield said. “They have done a lot of great stuff. And I know Alex said these words that they’re not doing anything special, they’re just doing what they’re supposed to be doing. He put a call to action out to all of us.”

“We’re doing what we’re supposed to be doing as caring adults,” Byrd-Clark said.

“He’s an incredible inspiration to so many, many and is the definition of the word turnaround in a purposeful life and those kinds of things,” Post said. “I’m lucky to know him.”

In Clark’s early years, he racked up criminal charges, including a federal drug charge. He served 18 years in prison and was released in 2014.

Since then, Clark has been a mentor for young people, particularly young black men and those at risk of falling into a life similar to the one he once lived, and he has helped them realize their gifts.

Clark continues to look ahead despite his diagnosis, working to start the Alex Clark Chess Club, an internet cafe for students after school, as well as scholarships and the Black Tie Scholarship Gala in March.

“If I so happen to die, helping these men and women, I lived a full life,” Clark said.

Editor’s note: This story was updated at 9:58 a.m. Jan. 4 to correct the headline of this article and Alisha Byrd-Clark’s name.