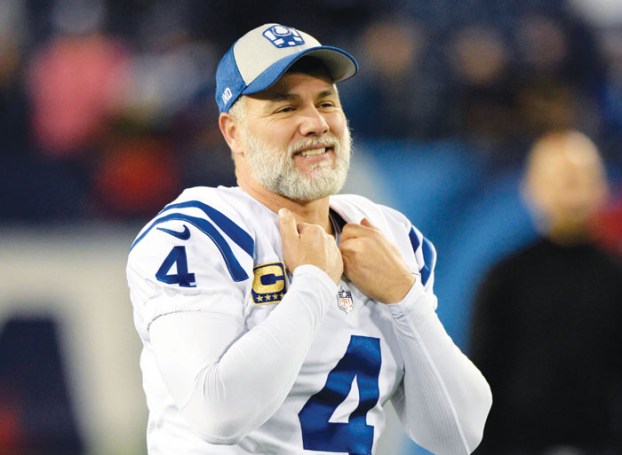 INDIANAPOLIS (AP) — Adam Vinatieri sits at one end of the Indianapolis Colts’ locker room, his expanding white beard nearly a perfect match to his helmet and jersey.

He doesn’t listen to the hip-hop music in the background, doesn’t pretend to understand the shiny, new electronic gadgets everyone else plays with and certainly doesn’t pay much attention to the trends outside these walls. Yet in Vinatieri’s mind, this is still the perfect spot.

Here, in a league known for being traditionally unkind to “old” men, the 46-year-old kicker feels comfortable retelling playoff yarns, discussing union business, even offering informal personal advice to teammates who, in some cases literally come from a different generation.

“He seems like he’s the same age he was when I first came in here and I guess that’s been eight years,” left tackle Anthony Castonzo said Thursday. “That’s pretty impressive, eight years, going through your early 40s that you don’t really seem any older. I’m always impressed with how he’s able to hang out with the young guys and be one of the guys despite being old enough to be one of our dads.”

Sure there are increasing signs of Vinatieri’s advancing age.

Make no mistake: Vinatieri is not gearing up for life after football just yet.

If given the chance, he says he’d like to play 10 more years and if he continues outperforming guys half his age, he just might continue a record-breaking career that doesn’t seem to be slowing down.

In September, he passed Morten Andersen for the most career field goals in NFL history. A month later, he supplanted Andersen as the league’s career scoring leader. Last week he joined Andersen, the late George Blanda and John Carney as the only players to appear in an NFL game after turning 46.

And if things go as planned in Saturday’s wild-card game at Houston (11-5), the NFL’s career postseason scoring leader would take the first step toward joining former teammate Tom Brady and Hall of Fame pass rusher Charles Haley as the only players to win five Super Bowl rings.

“There’s nothing like having the opportunity and being one of those teams still fighting to get into the Super Bowl,” Vinatieri said earlier this week. “Every team starts the season with that goal and the ultimate goal is still out there in front of us.”

It’s been a long slog back to the postseason for the greatest clutch kicker in league history.

After making the playoffs in 11 of his first 15 pro seasons, Vinatieri’s Colts failed to qualify four times in the next seven years, including three straight following a loss to the dreaded New England Patriots, Vinatieri’s former team, in the 2014 AFC championship game.

Twice during that span, the Colts changed general managers and coaches, and there were two major roster overhauls. Vinatieri survived both and is one of four active players left from Indy’s last playoff appearance.

Things didn’t look any better when the Colts were 1-5. But Vinatieri helped spur a historic midseason turnaround as the Colts won nine of their last 10 to claim the AFC’s final playoff spot by beating Tennessee and coach Mike Vrabel, one of Vinatieri’s ex-teammates.

Vinatieri celebrated by jogging off the field, pumping his fist like he had just made the postseason for the first time.

Not surprisingly, first-year coach Frank Reich, who once played against Vinatieri, asked his most experienced player to give some insight to the playoff newbies.

“He just said, I’ve been in a lot of playoff situations myself and you’ve had a few more than me,” Vinatieri said, describing the exchange. “Is there anything that you think needs to be shared? I think that’s pretty awesome.”

He could have used his rings as props or punched in a highlight reel showing the two field goals he made in the snow to jump-start the Patriots’ dynasty; the two Super Bowl-winning kicks; or the five kicks he made in Baltimore to keep the Colts’ 2006 title hopes alive.

Instead, Vinatieri delivered a simple message he learned long ago from Hall of Fame coaches Bill Parcells and Tony Dungy as well as Bill Belichick: If you try to do too much, your next loss could be your last.

First-time eligibles Tony Gonzalez, Ed Reed and Champ Bailey are among 15 modern-era finalists for the Pro Football Hall of Fame’s class of 2019.

A maximum of eight new members can be elected, five from the modern-era group. Inductions are Aug. 3 in Canton, Ohio.

Gonzalez played 17 seasons with the Chiefs and Falcons, but never made a Super Bowl. No matter: he holds the career record for tight ends with 1,325, second only overall to Jerry Rice, and gained more than 15,127 yards while scoring 111 touchdowns. His string of 211 straight games with a catch lasted from 2000-13.

Bailey played 15 seasons with Washington and Denver and was a three-time All-Pro. Considered one of the game’s best cover cornerbacks, he had a career-high 10 interceptions in 2006.

Lynch, a standout safety for Tampa Bay and Denver, becomes a finalist for the sixth straight year. Coryell, who coached the high-powered offenses of the Cardinals and Chargers in the 1970s and ‘80s, is a five-time finalist.

By Barry Wilner AP Pro Football Writer Some juicy rematches highlight wild-card weekend, in which, well, just about any of... read more