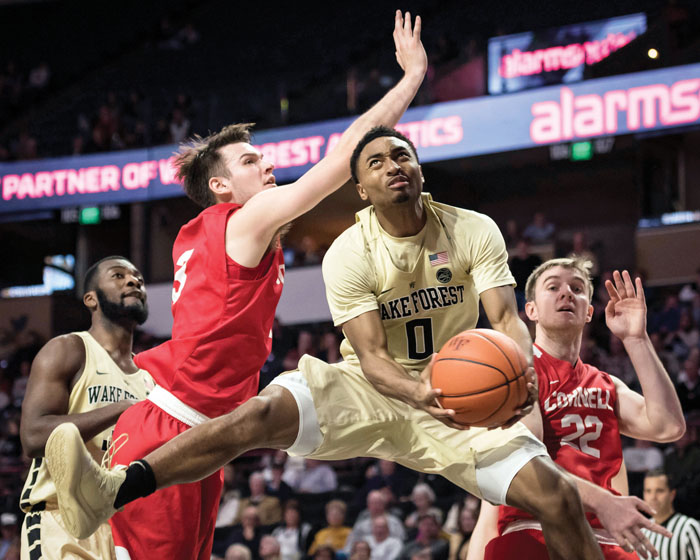 WINSTON-SALEM (AP) — Jaylen Hoard scored a career-high 23 points and tied his career best with 15 rebounds for his third double-double of his freshman season and Wake Forest beat Cornell 83-61 on Wednesday night to close out its nonconference schedule.

Hoard scored eight points in a 13-0 run in the final minutes of the first half as Wake Forest (7-5) took control and led 37-22 at halftime.

“He’s athletic and skilled, and it’s a challenge for teams that don’t have the athletes that they have,” Cornell coach Brian Earl said. “He was a big part of it. They were doing some good stuff. A lot of the stuff we have to fix, he pointed it out to us.”

The Demon Deacons scored the first seven points of the second half and won going away after outrebounding the Big Red 50-25. Brandon Childress scored 14 points and Chaundee Brown added 12.

“I thought we did some good things in certain categories,” Manning said. “This was the best in terms of numbers-wise, that we’ve rebounded the basketball. That gave us the chance to get some second-chance points.”

Wake Forest: Their opposition may have been overmatched, but the Demon Deacons were dramatically better than their last time out — Saturday’s 73-69 loss to Gardner-Webb. With Atlantic Coast Conference play looming, they will have to sustain a higher level than they ever managed during their nonconference schedule.

Cornell: The Big Red’s streak of futility against ACC opposition was extended to 34 consecutive games. Cornell previously lost 63-55 at Syracuse on Dec. 1. The program’s last win over an ACC foe came over Wake Forest in 1951.

Cornell’s Boeheim, the son of Syracuse coach Jim Boeheim, is a regular contributor for the Big Red. But Wake Forest’s Anthony Bilas, son of former Duke player and ESPN analyst Jay Bilas, had not scored in his career until Wednesday.

Bilas made his only shot from the field in the waning moments of the game, setting off a wild celebration from his teammates on the bench.

“From a standpoint of everybody getting a chance to play, that’s always nice,” Manning said. “Our walk-on guys, the guys at the end of the bench do a really good job of working hard in practice and coming in with a great attitude day in and day out. So that’s always nice to see.”