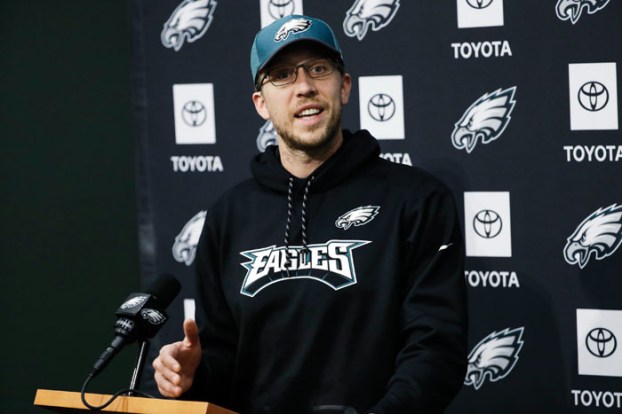 Philadelphia back in familiar role as playoff underdogs

PHILADELPHIA (AP) — The Philadelphia Eagles are back in a familiar role with a different disguise.

The defending Super Bowl champions traded in the dog masks for ski masks, but they’re still playoff underdogs for the second straight year.

Their road is much tougher this time around, however.

The Eagles (9-7) are trying to become only the third No. 6 seed to win it all, joining the 2005 Pittsburgh Steelers and 2010 Green Bay Packers. Philadelphia starts its quest Sunday against the Chicago Bears (12-4).

Last year, the Eagles had the luxury of a first-round bye and two home games but few expected them to do much with backup quarterback Nick Foles.

They were the first No. 1 seed to be an underdog in their opening playoff game, a 15-10 win over the Atlanta Falcons. Lane Johnson and Chris Long donned dog masks after that game to symbolize the team’s underdog status and it spread throughout the city and continued gaining momentum with each win.

On wild-card weekend, the combined total of the spread of the other three games is 5½ points while the Bears are 6-point favorites against the Eagles.

“To be an underdog and get back to that, we had to go through a lot as a team because we didn’t start out that way this year; it was actually the opposite,” Foles said Wednesday. “Then we went through some growing pains. We had to fight through it. It’s brought us closer together what’s happened, the ups and downs, it’s made us strong mentally.”

Foles began the season under center because Carson Wentz wasn’t ready following knee surgery that forced him out of the lineup in December 2017. The Eagles were 1-1 when Wentz returned in Week 3 and played inconsistent for most of the season. Following a 29-23 overtime loss at Dallas in Week 14, the Eagles were 6-7 and their playoff chances were slim. Then Wentz was sidelined by a back injury.

But Foles stepped in and led Philadelphia, a 13½-point underdog, to a 30-23 win over the Los Angeles Rams on Dec. 16. Foles set a franchise record with 471 yards passing in a 32-30 comeback win over Houston the following game and the Eagles secured a playoff berth with a 24-0 rout over Washington coupled with Chicago’s win at Minnesota.

“I know how our team has really fought this last month of the season, last six weeks,” coach Doug Pederson said. “And it does give you a little comfort knowing that we’ve kind of went through this grind and we’re here now and we have to continue to grind and continue to work. But I don’t think it’s any easier. It’s a different team again. Different set of circumstances. We have to travel; if we’re fortunate to win, we have to be on the road again. It feels different. But the excitement is the same.”

The ski masks came out in Dallas when players on defense decided to wear them after a turnover. The team had nine takeaways in the first 12 games and nine after using the ski masks as motivation.

“The ski mask thing is more fun for the guys,” defensive coordinator Jim Schwartz said. “Anything that can promote some camaraderie and things like that are all good. But the turnovers come when you do your job and make the plays that come to you.”

The Eagles and Foles have been at their best the past two seasons when few people expect them to have success. They aren’t concerned with low expectations.

“People have doubted us, but the only thing that matters is the people in this building, the people in the locker room, what we think, because that’s who is stepping on the playing field,” Foles said. “It’s special to be a part of a group of people that can come together when everyone doubts you and play at a high level.”