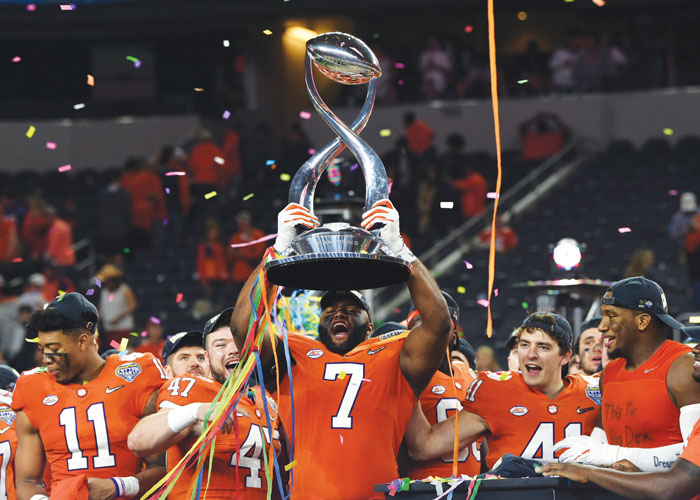 He vowed not to forget it.

Not that Falcinelli could have even he had wanted to. Clips of the 24-6 defeat to the Crimson Tide in last year’s national semifinal are played on the team’s giant video board at the Tigers’ practice facility. Players regularly field questions from fans eager for Clemson to avenge the loss.

The reminders of the disappointment has motivated and driven the Tigers throughout the season.

Now  No. 2 Clemson (14-0) gets its another crack at No. 1 Alabama (14-0) on Monday night in the national championship game in Santa Clara, California.

“It was a bit of a wakeup call,” Falcinelli said of the loss. “It’s driven us to say, ‘We did well, but there was still clearly plenty of room to improve.’ We’ve been focusing on that.”

Falcinelli said reflecting on the Alabama loss — Clemson has lost two of three CFP games to the Crimson Tide — was part of the routine during winter workouts , spring drills and summer weightlifting sessions.

“There’s always stuff to remind you why you’re working” to improve, Falcinelli said.

Last year’s Alabama-Clemson contest was the latest episode in the dramatic series, during which the teams have traded nail-biting wins in championship games, Alabama 45-40 in January 2016 and Clemson 35-31 on a last-second TD pass 12 months later.

But unlike those two games, Clemson’s offense could never get going against Alabama’s fearsome defense last year. Kelly Bryant threw two interceptions, both which led to Crimson Tide touchdowns, and the Tigers ran for just 64 yards in the demoralizing loss.

Austin Bryant, a senior who’s been part of all three playoff games with Alabama, said the players did not spend all their time consumed with losing to the Tide. They were more bothered that, as defending national champions, they had not lived up to their potential after the 2017 season and did not want to finish this year in a similar fashion.

What that means, Bryant said, was preparing with success in mind, no matter what the obstacle or the opponent would be.

It’s something Clemson coach Dabo Swinney continually talks to his players about — keeping their eyes on themselves when possible and the bar they’ve set these past few seasons.

“At the end of the day, we just try and be the best version of us, and we’re not trying to live up to anybody else’s standard,” Swinney said. “We’ve got our own standard here.”

Clemson brings a different quarterback into the matchup with freshman Trevor Lawrence taking Kelly Bryant’s spot. Lawrence was named the starter in late September and, days later, Bryant left the program and has since transferred to Missouri.

Lawrence has led Clemson’s offense on high-scoring run. The Tigers have averaged more than 45 points a game in his 10 starts, including a 30-3 win over Notre Dame in the Cotton Bowl last week to advance where Lawrence threw for 327 yards and three touchdowns.

“They have the capacity to beat us every year,” he said. “They did my freshman year and almost did the year before. So you have to play your best and you have to execute.”

Despite the respect Clemson gets, Tigers defensive end Clelin Ferrell said the Alabama loss last season stands out as a glaring breakdown in the level of success they has achieved. He said the Tigers worked hard to follow up their national championship season with another strong year. And while 12-2 and the 2017 Atlantic Coast Conference title might satisfy most programs, Ferrell said their performance left the Tigers flat.

Ferrell simply sums up their motivation, saying, “We don’t want to feel that way again.”