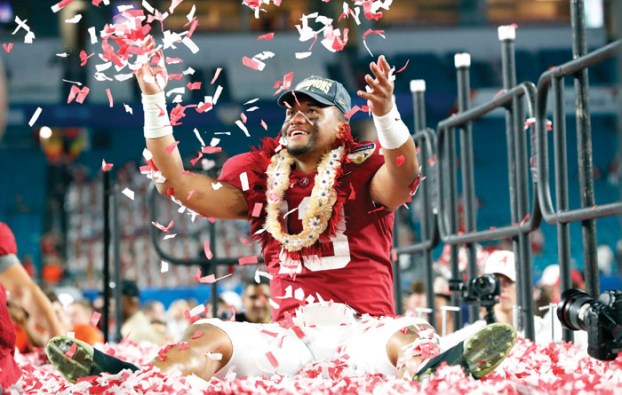 When talking about the possibility of expanding the College Football Playoff, the word momentum gets tossed around a lot.

Expansion seems inevitable. Why? Because playoffs always expand. But when?

Big Ten Commissioner Jim Delany told The Athletic last month he was ready to start talking about a larger playoff field, and prominent Big Ten athletic directors Barry Alvarez of Wisconsin and Jim Phillips from Northwestern have voiced support for that idea.

Notre Dame athletic director Jack Swarbrick, who sits on the CFP management committee along with the 10 FBS conference commissioners, said now is the perfect time to talk about changes to the four-team playoff.

“The CFP is doing great in terms of fan interest. In terms television ratings. In terms of every measure it has exceeded our expectations,” Swarbrick said. “So being open to talking about the model, this is the perfect time to do it. Do it from a position of strength.”

But, he added, “Doesn’t mean there’s any momentum for change.”

The current postseason system is not quite halfway through a 12-year contract with ESPN that runs through 2026. The fifth CFP national champion will be crowned Monday night when No. 1 Alabama faces No. 2 Clemson at Levi’s Stadium in Santa Clara, California. Like clockwork, the discussion over whether the current model is satisfactory has been cranked up for weeks — and that word momentum is never far away.

“It would seem to me that the political momentum here is moving in the direction of taking a real hard look at expanding this in some way shape or form over the next period of time, which I think would be before the end of this 12 years,” said Chris Bevilacqua, co-founder of Bevilacqua Helfant Ventures who has advised conferences in media rights contract negotiations.

What is certain about playoff expansion is that it will not be a simple task. That alone suggests later — after the completion of the current media rights deal — is a better bet than sooner.

“I don’t think this is on a fast-track at the moment,” Swofford said. “But I do think there is an openness and willingness to discuss it.”

There would be plenty of hurdles to clear, and the number of teams and how they are chosen is relatively simple compared to everything else.

College football is currently a one-semester sport and university presidents want to keep it that way. There is a lot already packed into the window from Labor Day weekend when the season opens to about Jan. 10 when the championship game is played. Last year, the NCAA football oversight committee looked at creating a slightly longer season to ensure at least two open dates for each team every year. That meant starting preseason practice in July, before summer classes ended at many schools. The idea was dropped.

Keeping the same calendar would mean playoff games in the middle of December, but that would conflict with final exams on many campuses. That space has also been declared off limits by university presidents.

Want to play quarterfinals on campuses the third week of December, two weeks after conference championship weekend? Now it’s not just the athletes who are being disrupted during finals, but the campus and the surrounding community.

“Have you ever tried to get a hotel (on short-notice) in Clemson, South Carolina? Or Blacksburg, Virginia?” Clemson athletic director Dan Radakovich said.

It has been suggested the quarterfinals could replace conference championship games. Good luck with that. First off, the Southeastern Conference has made it clear it has no desire to get rid of an event that is worth about $75 million to the league. Still, if an expanded playoff has automatic bids for conference champions, those title games become far more interesting and valuable to media companies holding their broadcast rights.

Shortening the regular-season from 12 to 11 games also comes with a cost to schools that make millions hosting or get big payouts for going on the road.

Another when factor: Would the College Football Playoff want to compete with the NFL, which plays regular-season games on Saturdays during weeks 15 and 16 of its 17-week schedule? If so, the value of those games drops for a broadcaster paying the rights fee.

HEALTH AND SAFETY AND MONEY

More often than not teams that reach the CFP championship game will play a total of 15 games. With the long-term effects of football more scrutinized than ever before, adding even one more game is not something done lightly.

“We have different obligations than professional sports commissioners who are primarily in it for the entertainment value and driving as much revenue,” said former Big 12 Commissioner Dan Beebe, who was a staunch playoff opponent back in the days of the Bowl Championship Series. “We have to consider these are student athletes, non-compensated young people.”

Uncompensated, but for how much longer? A federal court case in California challenges the legality of the NCAA’s amateurism model and compensation being capped at the value of a scholarship. The NCAA has no involvement with the CFP, which is run by the FBS conferences. The playoff currently generates about $470 million per year that is distributed throughout all levels of college football.

“Well if you’re going to put one more (round) and everybody else gets enriched, what’s going to happen with the ones who are playing in those games that are enriching everybody else?” Beebe said.

ESPN executives are quick to point out they do not decide what happens with the playoff and would be fine with expansion if that’s what the decision-makers want. But it’s unclear how well-positioned the network is to cough up millions for more playoff games.

IMPACT ON REGULAR SEASON AND BOWLS

College football Saturdays are an event for every campus community and the decision-makers want to keep it that way. The playoff has already devalued the regular season in some ways and expansion would continue that trend.

There are no more Games of the Century, regular-season matchups with ridiculously high stakes. But four playoff spots have kept more teams involved in the championship race deeper into November. Eight spots keeps even more teams involved, but eventually there will be an Auburn-Alabama game or Michigan-Ohio State game or maybe a conference title game that will feature two highly ranked teams playing for seeding.

It’s easy to scoff at the importance of all the bowls, with players skipping them more and more. But there are 130 FBS teams and maybe 15 percent have a realistic chance to make the current playoff. Increase the berths to eight and maybe that percentage doubles. The majority of teams are still playing for the best bowl spot possible. That’s how those schools keep their fans engaged.

The current powerbrokers in college football mostly grew up in the bowl system. They created the playoff to protect it. Expansion would further damage it. And while some fans don’t care about the Rose Bowl kicking off at 5 p.m. Eastern on New Year’s Day so the sun sets behind the San Gabriel Mountains in the second half, a lot of people with influence do.

If everything else is sorted out, there are also questions about format. Automatic bids for Power Five conferences? Best eight teams? Some combination of automatic qualifiers and rankings? Where do the Group of Five conferences fit? Keep the selection committee or not? If yes, change the criteria by which it selects teams or keep it highly subjective?

The CFP management committee meets the morning of the Alabama-Clemson game in San Jose, California. For the first time since the playoff was launched in 2014, there is real intrigue about the future of format. There has been plenty of talk, but no signs yet it will lead to action.

The BCS crumbled under the weight of negative public opinion. Fans hated it and the commissioners were tired of defending it. The CFP is not there yet.

“There’s widespread satisfaction with the four-team college football playoff,” CFP executive director Bill Hancock said. “But clearly there are some individuals who are thinking about whether or not it’s necessary to even begin any kind of discussion about the future. There may be some who want to talk now. There may be others who are not ready. We may ponder when to ponder.”

By Josh Dubow AP Pro Football Writer From Pittsburgh’s Steel Curtain in the 1970s to Chicago’s Monsters of the Midway... read more