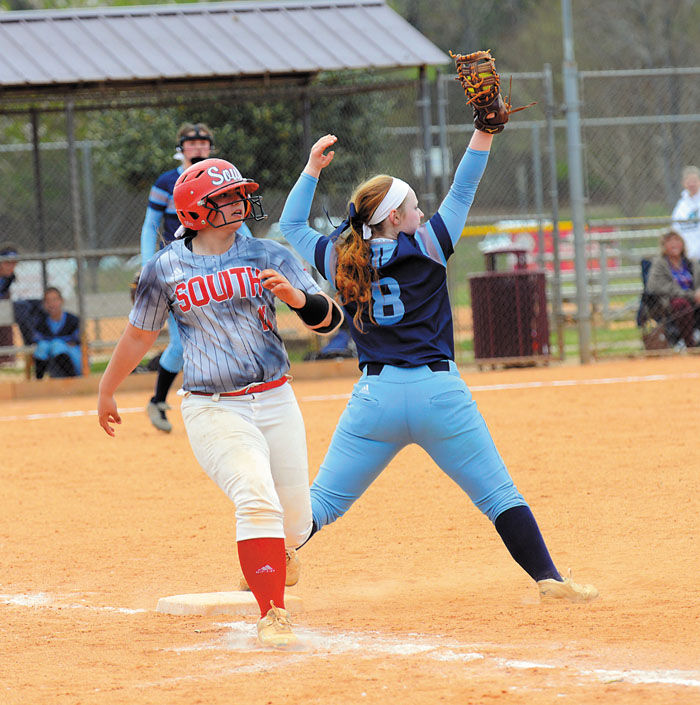 LANDIS — An average player for South Rowan’s softball team as a sophomore, Summer McKeon made an enormous jump as an all-county junior.

Her extra-base hits climbed from three to 17.

She hit seven balls out of the park in 2018, after going homer-less in 2017. Her 33 hits also included eight doubles and two triples.

“I hit two homers on our Senior Night,” McKeon said. “When I started hitting homers last year it was a lot of fun. We had to keep coming up with new ways to celebrate.”

McKeon, who signed in November with North Carolina A&T, likes to credit the new bat she got for her birthday for becoming a power hitter.

South coach Dean Mullinax  isn’t sure he believes in magic bats. He does believe in work.

“I’ve known for a while Summer was going to end up as a college player,” Mullinax said. “I’ve seen her change. She’s a dirt-baller, a go-getter. She keeps progressing, keeps getting better because of all the time she puts in.”

On Monday, McKeon headed from South’s off-season workouts directly to hitting lessons. That was a pretty typical day for her.

“I’ve worked a softball almost non-stop since last season,” McKeon said. “After school ball, there was tournament ball. I played American Legion softball for Kannapolis, and that helped me a lot. Now I’ve got team workouts and hitting lessons. I’ve learned a lot about hitting from some good coaches. I’ve learned about being patient and waiting for the right pitch, and once you start hitting, your confidence jumps. I’m confident now every time I walk to the plate. I didn’t feel like that when I was a sophomore.”

One of McKeon’s summer stops was at North Carolina A&T’s camp. Her power hitting and outfield play led to an offer from the Division I program in Greensboro. She was offered a half-scholarship, which is a lot of money for softball.

She expects to be an outfielder for the Aggies, although she’s played just about everywhere on the diamond at some point in her career.

“I’ve seen her catch, pitch and play infield and outfield,” Mullinax. “But I think she’ll be best in college as an outfielder.”

The Aggies were 7-37 last season, so McKeon may get an opportunity to play early.

“I’m excited about the chance to be a Division I player,” McKeon said. “They play a great non-conference schedule — Appalachian State, Western Carolina, UNC Wilmington, schools like that.”

McKeon got started swinging a bat as a T-ball baseball player at age 6. She was advised to make the switch to softball about a year later.

She’s stuck with it all these years and followed her older sister, Autumn McKeon, who also played for South.

McKeon had a homer and a double in a game against Central Carolina Conference co-champ North Davidson last season. She also homered against contenders West Davidson and Central Davidson. She homered for South’s only run in a loss to Carson.

“She can hit and she loves the game,” Mullinax said. “It won’t surprise me if she becomes a coach.”