Ringing in the new year 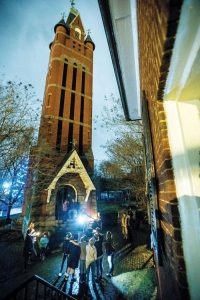 A couple of dozen people welcomed the new year at the Bell Tower in downtown Salisbury. Jon C. Lakey/Salisbury Post

SALISBURY — The call came from Salisbury’s Parks and Recreation Department just minutes before noon Monday: the New Year’s Eve celebration at the Bell Tower was canceled because of impending bad weather.

People have celebrated at the tower every Dec. 31 since the mid-1970s, when Salisbury persona Clyde and Barbara Jackson decided to trek to the historic site with leftover candles from a Hall House celebration.

A small group gathered, welcoming the new year with a round of “Auld Lang Syne.”

Clyde said the celebration has taken many different forms and seen many orchestrators since that first year. Crowds have numbered in the hundreds or dwindled to as few as 11.

Many years, revelers or special guests were given the opportunity to ring the bell. But one thing always remained the same, Clyde said: “We’ve done it every year.”

And that wouldn’t stop this year, despite the early call from the celebration’s current host.

Parks and Recreation Director Nick Aceves said the decision was made in light of current conditions at the park. Soggy soil and continued precipitation made the three biggest components of the celebration unachievable, he said.

That would be music, lights and a live projection of the countdown from Times Square.

“We don’t take it lightly when it comes to canceling events,” said Aceves. “… Our biggest issue is safety for our patrons.”

But folks looking to make merry would not be deterred, it seemed. Just after 11:30 p.m., a small crowd approached the steps of the Bell Tower in the cool, clear night air.

Some were members of a family, in town to visit their father. Lisa and Edward Stills and Amy Tripp had traveled from Asheboro and Wilmington and were unaware the celebration had been canceled.

Waiting under the shadow of the tower to greet them, dressed in long johns, a wool jacket and top hat? Clyde.

More folks would trickle in, including members of Bell Tower Green Inc., who came bearing keys — meaning another tradition would be kept.

As the clock struck midnight and 2018 became a thing of the past, all interested were welcomed into the Bell Tower to literally ring in Jan. 1.

“Thank you all for keeping this tradition alive,” said City Council member Tamara Sheffield. “We got to keep it alive; we got permission to do it. Happy 2019, and thank you all for a great 2018.”