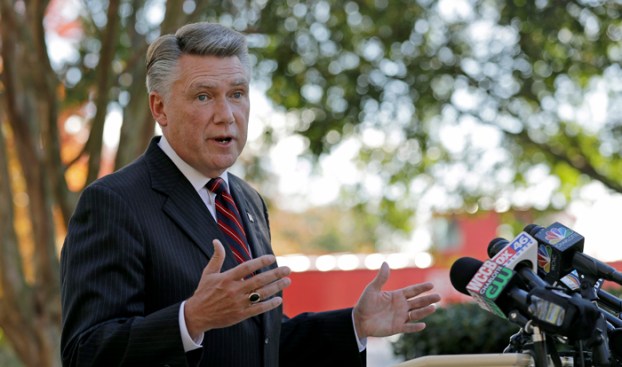 Republican Mark Harris speaks to reporters during a news conference in Matthews in November. The N.C. board investigating allegations of ballot fraud in the unresolved 9th District congressional race between Harris and Democrat Dan McCready was disbanded Friday. Chuck Burton/Associated Press

Attorney David freeman of Winston-Salem said Monday there’s no need to call witnesses to a scheduled Jan. 11 hearing because there’s no elections board authorized to examine evidence or take action.

Freedman said that is why he didn’t seek to compel witnesses by a Sunday deadline.

Attorneys for Democratic candidate Dan McCready, on the other hand, sought subpoenas that could force appearances by four dozen witnesses, including Harris, his campaign staffers, state and local Republican Party officials, and a political operative named Leslie McCrae Dowless, who witnesses allege collected incomplete and unsealed ballots from voters.

All may have some knowledge about why Harris enjoyed an unusually large advantage in absentee ballots in two of the 9th Congressional District’s rural counties, the Democrat’s attorneys said.

Dowless did not respond to a phone message Monday. He has not violated any state or federal campaign laws, and ongoing investigations will prove him innocent, said his lawyer, Cynthia Adams Singletary, in her only statement two weeks ago.

The state elections board has refused to certify the Harris-McCready race while it investigates irregularities in the district in the south-central part of the state. Harris holds a 900-vote lead in unofficial results, but election officials are looking into criminal allegations against Dowless, the operative hired by the Harris campaign.

“We intend upon cooperating with the investigation,” Freedman said. But “we don’t feel there’s any deadlines. We’re still working on it, but the committee that set the deadlines is no longer in existence.”

The elections board was dissolved Friday by judges who in October declared its form unconstitutional. A revamped board takes effect Jan. 31.

Democratic Gov. Roy Cooper claims he can re-establish the state elections board in time for the Jan. 11 hearing. Republicans are threatening to sue if he tries.

Cooper’s legal adviser, William McKinney, said if Republican Party Chairman Robin Hayes does not nominate candidates for the interim elections board, “one is compelled to conclude that you are withholding your nominations and encouraging people not to serve solely for the purpose of impeding and obstructing the 9th Congressional District investigation.”

Though new U.S. House members are scheduled to be sworn in Wednesday, incoming House Majority Leader Steny Hoyer said last week that majority Democrats won’t allow Harris to take office this week because of the ongoing investigation. The U.S. Constitution states that the House is the judge of the elections of its members and the final arbiter of contests.

McCready’s campaign said Sunday that it wants the elections board to require hearing appearances from Dowless and more than a dozen people who worked for him or volunteered to help his absentee ballot efforts. The elections board also should request testimony from more than a dozen voters to hear about ballots that were hand-collected and potentially altered, the McCready campaign said.

The witnesses should not be compelled to testify and given the opportunity to invoke their constitutional rights against incriminating themselves in a crime to preserve the option of prosecuting them if appropriate, Washington.-based elections lawyer Marc Elias and an associate wrote in letter.