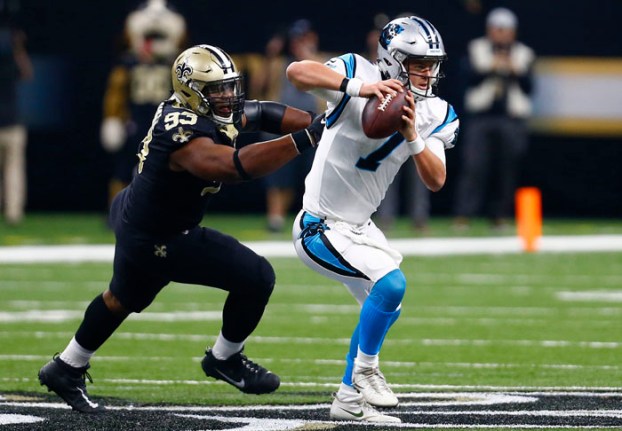 NEW ORLEANS (AP) — Panthers undrafted rookie Kyle Allen turned in a promising first NFL start — until he hurt his shoulder.
Whether the New Orleans defense that Allen victimized was entirely dialed in is another matter.
Allen passed for 228 yards and two touchdowns before his injury in the fourth quarter, and Carolina cruised to a 33-14 victory over a Saints squad looking ahead to the playoffs.
“It was incredible. I just felt at home right when I got on the field,” said Allen, who lost starting roles in college at both Texas A&M and Houston, and who was not on Carolina’s roster for part of this season. “This league is filled with opportunities, and guys that stay in the league for a long time are the guys that take advantage of those.”
A third-stringer pressed into service with Cam Newton and backup Taylor Heinicke out, Allen also ran for a short touchdown as Carolina snapped a seven-game slide. He led the Panthers to three TDs and a field goal on their first four drives. His day ended prematurely when he was hit hard by Saints rookie end Marcus Davenport while releasing an incomplete pass. Allen said he felt pain in his right shoulder while throwing on the sideline afterward, but that he did not think the injury was serious.
Carolina (7-9) led 23-0 at halftime, marking the first time since coach Sean Payton was hired by New Orleans in 2006 that the Saints (13-3) were shut out at home in a first half.
“We can spin it any way we want to. We didn’t play well,” Payton said. “From the get-go, it was obvious. So you take that personally as a coach, and it’s disappointing.”
Allen’s touchdowns went for 53 yards to receiver Curtis Samuel and 8 yards to tight end Ian Thomas.
Having already clinched the NFC’s top seed, Payton scratched several healthy offensive starters, including record-setting quarterback Drew Brees and dynamic second-year running back Alvin Kamara.
By not playing, Brees finished the regular season with an NFL record 74.4 percent completion rate for a single season, breaking the mark of 72 percent he set last season.
His replacement for the finale, Teddy Bridgewater, started an NFL game for the first time since the 2015 season. The move gave Bridgewater a chance to rebuild his credentials as a potential NFL starter after missing most of the past two seasons with a career-threating knee injury.
“It was a pretty cool moment, just running back out there. It’s been a long time, but I’m grateful for that moment, grateful for that opportunity,” Bridgewater said. “Honestly, I just wanted to get back into the rhythm of playing football. That was my biggest goal.”
Bridgewater completed 14 of 22 passes for 118 yards, one touchdown and one interception.
The Panthers scored the game’s first two TDs on Allen’s 1-yard keeper and Cameron Artis-Payne’s 15-yard run, and New Orleans fell behind 30-0 before scoring its first points on Bridgewater’s 9-yard pass to rookie Tre’Quan Smith early in the fourth quarter.
Saints third-string QB Taysom Hill added a 9-yard TD on a read-option run.
The Saints had little at stake other than the opportunity to secure the franchise’s first 14-win regular season. They’ve gone 13-3 three times, all under Payton in 2009, 2011 and this season. The 2009 team won the Super Bowl.

RECEIVING RECORD
Saints receiver Michael Thomas came in needing 24 yards to break Joe Horn’s single-season franchise mark of 1,399 yards receiving in 2004. Thomas started, but with the Saints’ offense struggling to sustain drives, it took until the first minute of the fourth quarter before Thomas eclipsed Horn’s mark with a 6-yard catch. The Saints were clearly keeping track; numerous teammates congratulated Thomas right after the catch.
“It’s a blessing,” Thomas said. “I feel like I’m going to be judged on my progress year in and year out.”

RARE COMPAMY
With his 22-yard reception in the first quarter — his only reception of the game — Christian McCaffrey became the third running back in NFL history to have 1,500 yards rushing and receiving in his first two NFL seasons combined. He joined Kamara and Herschel Walker.

INJURIES
Panthers: Allen was replaced by newly signed reserve Garrett Gilbert, who went 2 for 3 for 40 yards.
Saints: Versatile offensive lineman Andrus Peat, who normally starts at left guard but also has played both tackle positions this season, left in the first half with a hand injury.

UP NEXT
Panthers: Start their offseason with questions surrounding the futures of several prominent players, including linebacker Thomas Davis, safety Mike Adams and receiver Devin Funchess, who have expiring contracts. Center Ryan Kalil already said he’d retire after the season and coach Ron Rivera said he was “assuming” the 38-year-old Peppers would, too.
Sunday’s victory, Rivera said, “was probably the best way to send Ryan and Pepp off on their way — two great Panthers.”
Saints: Host their playoff opener in the divisional round on the weekend of Jan. 12-13.

Wizards win over the Hornets, but lose Wall for season

WASHINGTON (AP) — The Washington Wizards will need more of the balance they displayed on Saturday night if they hope... read more