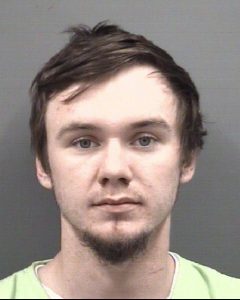 CHINA GROVE — An Albemarle man has been charged with stealing a trailer used to store equipment owned by a China Grove Cub Scout pack.

On Nov. 16, the Rowan County Sheriff’s Office began investigating the theft at Ebenezer Lutheran Church, 4914 Old Beatty Ford Road. The trailer was used to store camping equipment used by Cub Scout Pack 328, which is based at the church.

Detectives identified 23-year-old Jeremy Steven Shaver of Catalina Drive as a suspect. Shaver was also the suspect in the larceny of a motorcycle from the same area three days before the trailer was stolen.

Shaver was arrested in Albemarle and charged with both larcenies. He remains in the Stanly County jail under a $420,000 secured bond. He will be returned to Rowan County.

Several of the Cub Scout pack’s items that were in the stolen trailer have been recovered, but the trailer is still missing. The investigation continues.

Cubmaster Kevin Fuller said the pack is made up of boys and girls who are in kindergarten through fifth grade. Much of what was in the trailer was camping gear, cooking equipment, tents and tarps.

Fuller said he’s happy that some of the Scouts’ items were recovered. He estimated that about 10 percent of the property was returned.

“In most theft cases, a lot of times they don’t find leads,” he said.

He said he is grateful for the work of Deputy Weaver and Detective Phillips, who realized that property was stolen from the church while investigating another case. Fuller submitted a letter to the Post, published Sunday, thanking the officers.

Fuller said most of the parents knew about the theft but chose not to upset their children by telling them.

Scouts in Pack 328 go camping multiple times per year and recently returned from a trip in November. Fuller said the pack hopes to have something worked out before the children take their next camping trip.

In the future, Fuller said the pack plans to house the trailer and camping equipment in a secure location, even though he thinks the church has adequate security. The trailer was locked, as was the hitch. The lock was cut, Fuller said.

AAA Carolinas CHARLOTTE — AAA Carolinas urges those planning to celebrate the arrival of 2019 to do so safely, especially... read more