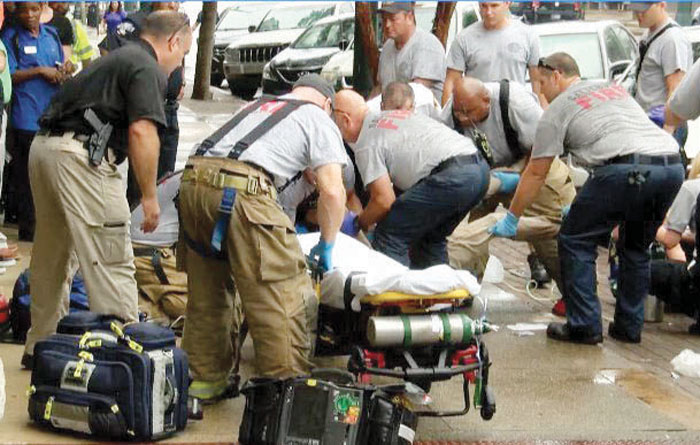 Photo courtesy of WBTV On Aug. 11, 2017, fire, police and other emergency responders work to revive a couple who overdosed and passed out in downtown Salisbury. A 5-year-old boy was in their pickup parked in front a downtown business.

SALISBURY — In 2017, Rowan County ranked in the top five among North Carolina counties with opioid addiction and overdose problems. As of this month, Rowan has dropped out of the top 10, according to Dr. John Bream of Novant Health.

Bream said then that the Rowan County community had been hit hard by the nationwide epidemic with an ever-increasing number of people dying from opioids, especially those laced with lethal fentanyl.

According to the most recent data collected by the N.C. Department of Health and Human Services, as of June 2018 there had 533 visits to the emergency room for opioid overdoses compared to 568 in June 2017, a decrease of just over 6 percent.

The number of people being admitted to the ER for heroin use has decreased while the number admitted for fentanyl use has increased significantly, he said.

“Generally, we have seen a pretty significant decrease in opioid overdoses,” Bream said.

He said that last week, a patient arrived at the emergency room unresponsive. Before arriving at a friend’s home to play video games, the man had taken 30 milligrams of oxycodone. His friend put him in a car and drove him to the hospital. The man was given Narcan, an overdose reversal drug, and survived.

In late August 2017, the Rowan County Public Health Department organized a forum on the opioid crisis designed to help county leaders learn from key organizations about how the issue affects Rowan County.

A second forum was held in May 2018 and featured panel discussions by experts and people who are in varying stages of sobriety as well as parents of heroin addicts who died from overdoses. Journalist and author Sam Quinones, who was the keynote speaker at the six-hour forum, spoke about his book “Dream Land” and gave insights about opioid abuse.

The ER doctor said he thinks the public is more aware of the dangers of opioids and hopes the significant increase in awareness has contributed to the decline in overdoses.

At the beginning of 2018, every patient who was discharged from Novant Health received a letter explaining the Strengthen Opioid Misuse Prevention (STOP) Act and how it means doctors would cap the number of pills that would be prescribed and the number of times they would prescribe them. Each patient, regardless of whether he abused narcotics, received information about narcotic addictions and a list of narcotic collection locations.

Bream said the hospital never received complaints about the letter and other leaflets. Awareness is so prevalent that people understand why the hospital is taking these extra measures.

Although there have been decreases in the number of overdoses, the problem still exists, says Rowan County Sheriff’s Office Deputy Chief David Ramsey.

“It is an ongoing problem,” Ramsey said. “Opioids and methamphetamine appear to be locked at the hip in this county. Where you find one, you usually find the other. Deaths and reported overdoses appear to be down, but most likely from Narcan deployment.”

Ramsey said in talking with narcotics users, he finds that a lot of overdoses are not reported to law enforcement and that Narcan is being deployed by acquaintances.

It’s hard to pinpoint an exact number because of the way different agencies report overdoses and deaths related to opioids. For instance, Rowan County EMS collects data on the number of overdose calls medics respond to, including those where Narcan is used, while law enforcement agencies respond directly to calls for overdoses.

The Rowan County Sheriff’s Office began tracking overdoses it responds to, which was made possible because of access to federal money for opioid investigations through the Drug Enforcement Administration.