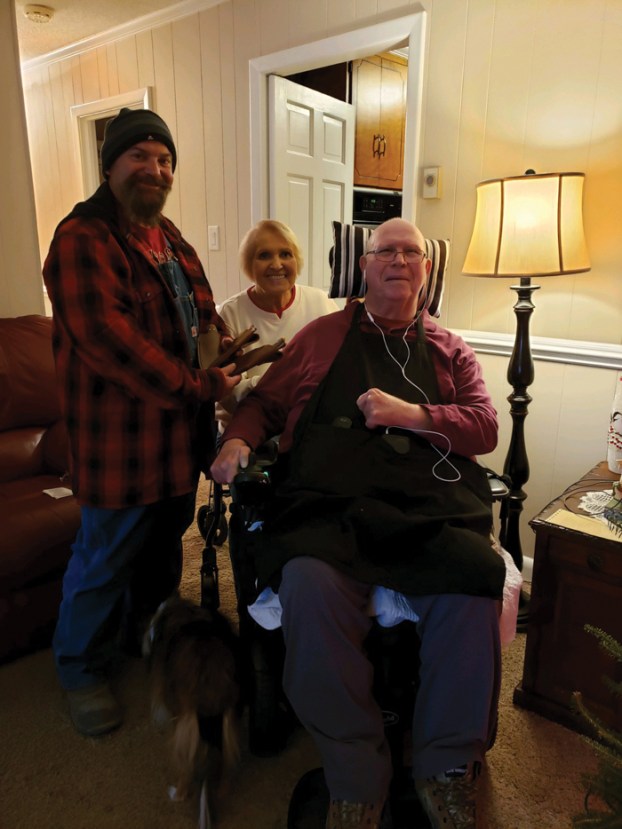 David Diggs presents three knives to Ray and Diane Rivers. The couple gave them to their two sons and son-in-law for Christmas gifts.

David Diggs: A craftsman with a big heart

ROCKWELL — David Diggs is a machinist by trade, but a craftsman at heart.
David, 49, is the owner of Diggs Customs, a line of custom-made hunting knives. He’s been making knives for a dozen years or so, but this year, they really started taking off, he says. He just finished his biggest Christmas ever, creating 20 knives.
“They are functional knives you can use for hunting,” David explains. “Some people don’t want to use them because they say they are so pretty, but I want people to use them.”
David works in the basement workshop of his Rockwell home. He laughs and says it is strictly off limits to visitors. Creative people are not known for their neat work spaces, it must be said.
His knife making skills have evolved over the years.
“For the longest time,” he says, “I had no tools.” 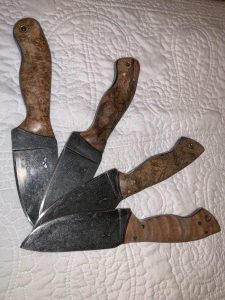 David made these knives for a longtime customer.

He’d order sheets of steel, clamp them to a 2-by-4, and file them down by hand.
“It took forever,” he says.
He later bought a belt sander, then a larger one, and everything started going faster. Now, a friend uses a high-pressure water jet at a local machine shop to cut out the blades, programming David’s hand-drawn designs into a computer.
“That saved me for Christmas,” David admits.
He then grinds the taper on the blades and smooths them. He can create any type of blade finish, but most customers prefer the dark, stonewash finish.
Now for the handles. A friend in Virginia, Tim Kipps with J Hue Customs, supplies the wood, which comes in blocks, that David then shapes the wood. David uses all sorts of wood, from hickory to oak to spalted maple and spalted sycamore to burl wood. He especially loves the cool patterns in the spalted pieces. He also uses Micarta, a composite material that includes canvas and fiberglass. David notes that he needs to replenish his wood inventory after the Christmas rush.
David uses a high-strength epoxy to connect the blade to the handle, and heat treats the blade as well. Finally, he adds a custom leather sheath for each knife, which is hand-stitched by his daughter, Claudia, 11, a sixth-grader at Erwin Middle School. Son Nathan, 17, is a senior at East Rowan High School.
David and his wife, Wendy, who works for Rowan County, have been married for 20 years. When he’s not working or making knives, you can find the two riding motorcycles, he on his Harley Heritage and she on her Harley Sportster.
As for other hobbies, he says, “I ain’t got time to do nothing else!” 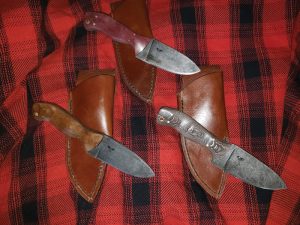 The three knives David made for Ray and Diane Rivers. The Rivers let David choose the details, so each one is different.

Not only does David sell knives, he’s generous in donating to local charitable events. For years, he’s given a knife to the annual fish fry fundraiser at Grace Lutheran Church, the congregation where he’s a lifelong member. He also donates knives to the Eastern Star craft fair and the Eureka Masonic Lodge Charity Ride. His parents, the late Fred and Vivian Diggs, were heavily involved in both organizations. His sister, Angela Diggs Lippard, 52, remains active in Eastern Star. His brother, Donnie Stout, 61, is a member of the lodge, and oldest brother, Mike, 63, also lives in Rowan County, as do Angela and Donnie.
David says that most of his customers are men, but in 2019, he plans to expand his offerings into kitchen knives and steak knives to accommodate female customers, too.
David got interested in knife making when his boss at PMS Firearms was taking a gunsmithing class at Montgomery Community College. The school in Troy also offered a knife making class. David is a 1987 graduate of South Rowan High School and received certification as a machinist from Rowan-Cabarrus Community College. He now works each weekday from 7 to 3:30 at Carolina Stalite, which gives him time in the afternoon and evenings — and weekends — to make knives. He’d love to do his craft full-time one day, but for now, the lure of that steady paycheck is too strong.
On Thursday evening, David delivered an order of three knives to Ray and Diane Rivers — longtime church friends — for their two sons and son-in-law. The Rivers family celebrated Christmas on Friday, and Philip Rivers, Jason Rivers, and Jeff York each received a knife with their name on it.
“They have a custom knife they can’t get anywhere else,” Ray says with pride. “We’re very pleased with them. David does exceptional work.”
Ray calls his boys “occasional hunters and fishermen.”
“But I hope these knives will be family heirlooms that can be passed down,” he adds.
Ray knew that David had donated knives for the Grace fish fry, and saw them in pictures and in person.
“I was so impressed that I asked him to make knives for our boys,” he says. “The blades are the same, but each handle is different. They are all three beautiful, just gorgeous.”
One longtime customer has been with David ever since he worked at PMS Firearms. He and his business partner, both local medical professionals, have purchased knives from David. Both are avid hunters and fishermen.

David designed this logo for his custom knives. He likes skulls and, since he wears a goatee, added that as a special touch.

This customer ordered six knives for Christmas for his brother, his dad, his father-in-law, and his three brothers-in-law, all of whom are hunters and all of whom appreciate a good hunting knife. David was able to finish four, and the customer’s dad and father-in-law are eagerly and graciously waiting to receive their gifts early in the new year.
“There’s an art to it all,” the customer says. “I love all the types of wood he uses, and the fact that it’s made locally really appeals to me. Each knife is a piece of art, and every time I talk with him, he is making a knife for charity, which is really cool. I like to support somebody with such a big heart.”
Brother Donnie admits he’s biased about his little brother’s work.
“But he really didn’t know how good he was,” he says. “We are tickled to death for him.”
David is a member of the North Carolina Custom Knife Guild, which meets quarterly at Montgomery Community College.
“Everybody’s got their own niche,” Donnie explains, “and I love David’s designs. Each one is different in its own way. You’ll find something a little different about each one.”
Donnie has six of David’s knives, one of which he uses for elk hunting.
“It’s redneckish for me to feel this way, but it’s a special thing to use a knife he made for me,” Donnie says.
Customers must be willing to wait for their knives. It takes David 10 to 12 hours to make each one.
Donnie says, “It really means a lot when you have people who know the type of work that went into it.”
To order a custom knife from David Diggs, contact him through his personal facebook page or through the Diggs Customs page on facebook.

Year in review: Test your nose for 2018 local news

Here are 50 Salisbury Post news quiz questions covering 2018. If you answer 45 to 50 correct, consider yourself a... read more