Rowan Chamber of Commerce President Elaine Spalding has been named to the executive committee of the newly created Charlotte Regional Business Alliance.

The alliance is the merged organization of the Charlotte Chamber of Commerce and Charlotte Economic Development Partnership.

Spalding was invited along with other regional leaders to help provide outreach to the entire metro area. There are 27 members of the executive committee.

Niven was named president of Biscuitville, which is based in Greensboro, in March.

“We’re thrilled for Kathie to be included among the leaders of America’s restaurant industry. She is certainly deserving of this accolade,” Biscuitville CEO Burney Jennings said. “Kathie was the perfect fit to become Biscuitville’s president last spring, and she immediately began 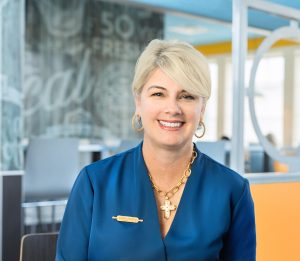 providing tremendous leadership and vision for our company.”

Biscuitville employs more than 1,200 people and operates 55 restaurants in North Carolina and Virginia.