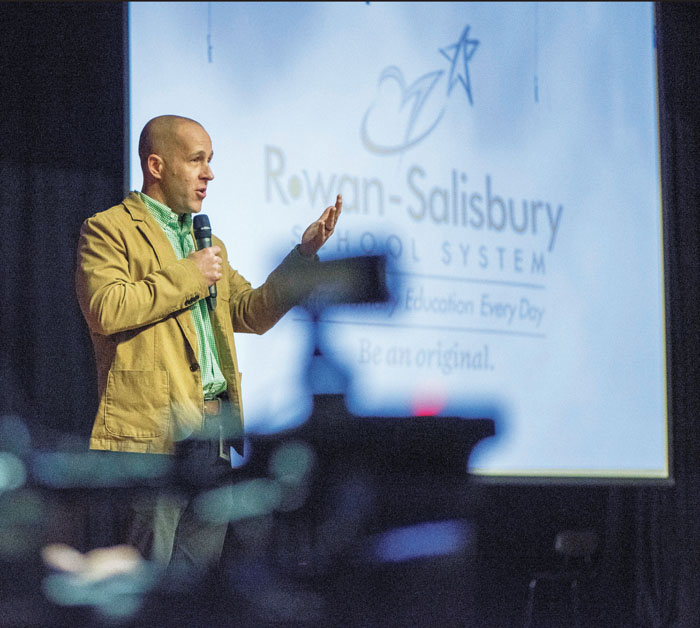 School board member Kevin Jones welcomes the crowd and gives instructions about how the meeting will proceed. Jon C. Lakey/Salisbury Post

For former Spencer alderman and school board newcomer Kevin Jones, the journey into public office came from a desire to connect more with his hometown.

“I was wanting to get more plugged in to the Spencer community and to help change the negative perception of Spencer,” he said of his 2011 bid for the Spencer Board of Aldermen.

Residents must have found him the man for the job, as he won not one but four bids for the seat. And it was his dedicated work on the board that led him to his second public office.

“In 2017, the Spencer board set a goal to become more invested in and involved with the Rowan-Salisbury school board,” he said. “I naturally agreed with this emphasis since I have children at North Rowan Elementary and North Rowan Middle.  … This was a natural fit.”

Jones said he finally decided to make the switch to the school board after receiving encouragement from North Rowan board representative Richard Miller, other neighbors and his family.

With the school district now addressing a controversial consolidation plan, Jones said he views his November election to the school board with mixed emotions.

“On one hand, my timing to join the board couldn’t be worse,” he said. “I have stepped into a very difficult situation. On the other hand, I am grateful that I am stepping on the board now because it is such an important time for the board to set a course for our future.”

As the new year approaches, Jones said he is working to learn as much as he can about the current state of the school system.

“It is obvious to me that we cannot keep things the way they currently are,” he said. “We have way too many capital needs and too many empty seats in our schools. But I also have some big concerns with the consolidation plan.”

Jones said he’s not in favor of closing North Rowan High School and thinks the board can find ways to increase enrollment at that school.

And he plans to work with fellow board members to do just that in 2019, Jones said.

“I plan to advocate for our students, support our teachers, and think for our future as a member of the school board,” he said. “I hope that we can initiate a plan to alleviate some of our current issues of too many empty seats and too many capital needs, while not closing any of our traditional high schools.”