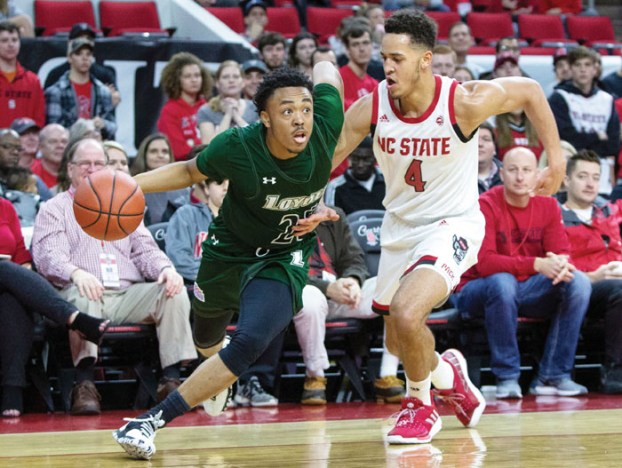 By AARON BEARD, AP Basketball Writer
RALEIGH (AP) — North Carolina State has a national ranking, confidence in a productive 10-man rotation and its best start in more than a decade.
That’s about all coach Kevin Keatts could’ve wanted from a now-completed nonconference schedule, which wrapped Friday night with the No. 20 Wolfpack beating Loyola (Maryland) 97-64.
“If you had told me we would be 12-1, I probably would’ve taken it,” Keatts said. “Obviously we had our chances to be 13-0.”
Fair enough, the Wolfpack (12-1) did lose close at No. 15 Wisconsin in November. But beyond that, there really isn’t much that N.C. State left unaccomplished entering Atlantic Coast Conference play.
Sophomore guard Braxton Beverly sees improved defense. Senior Torin Dorn figures N.C. State has gotten better at closing games strong, which didn’t happen in the road loss to the Badgers. And Keatts has been right so far — in nonconference play, anyway — that he can get reliable play deep down his rotation. It’s key to the Wolfpack’s success, both in keeping the players fresh in their fullcourt pressure and providing ways to offset a bad night from a key player.
“I think it’s been good for us,” Dorn said. “I think we have a lot of guys who play extremely hard. When we’re able to rotate in and out of that, we’re able to stay fresh. It’s worked for us so far and we’ll see how it goes come ACC (play), and hopefully that’ll be an asset for us.”
Dorn finished with 17 points and eight rebounds for the Wolfpack in the team’s first game with an AP Top 25 ranking in nearly six years. N.C. State shot 63 percent and used a 13-0 run spanning halftime to stretch out the lead, then maintained a comfortable margin on the way to a sixth straight win.
Less than a week after scoring 62 bench points, N.C. State finished with 45 bench points. It helped, too, that the Wolfpack scored 35 points off turnovers and blocked 13 shots.
Andrew Kostecka scored 27 points for the Greyhounds (4-9), who closed a five-game road swing with a third straight loss by at least 18 points.
“I think our guys were doing a good job of following the game plan, not playing individual basketball, playing team basketball,” first-year Greyhounds coach Tavaras Hardy said. “And when we were doing that, we were getting good looks and good shots. We just had a stretch down at the end where we had turnovers that they were able to turn into layups.”
BIG PICTURE
Loyola (Maryland): The Greyhounds had shot 51 percent overall and 48 percent from 3-point range in the past four games, but never found that rhythm in Raleigh. They shot 33 percent in the opening half when the game was close, then watched N.C. State run off the last eight points of the half to take a 45-30 lead at the break. Loyola shot 41 percent for the game.
N.C. State: The Wolfpack returned to the AP Top 25 on Monday, earning the program’s first ranking since January 2013, following an upset of then-No. 7 Auburn. And the nonconference slate has offered a formula for success, which has N.C. State off to the program’s best start since going 12-1 in the 2005-06 season.
‘LOW ENERGY’
Markell Johnson, N.C. State’s starting point guard and No. 2 scorer, played just 14 scoreless minutes. Keatts was blunt when asked why.
“Markell was low energy,” Keatts said. “When you are low energy, you don’t play for me. … I wanted more energy from him, especially on the defensive end.”
HELLEMS’ PLAY
Wolfpack freshman Jericole Hellems is finding a spark-producing reserve role. He matched his season high with 16 points to go with four rebounds, four assists, two blocks and two steals in 23 minutes.
“(Keatts) says this to me every day, that defense is the most important thing coming off the bench,” Hellems said, “and just giving the team some energy.”
UP NEXT
Loyola (Maryland): The Greyhounds open Patriot League play by hosting Holy Cross on Thursday.
N.C. State: Time to hit the road for Thursday’s ACC opener at Miami.
___
More AP college basketball: https://apnews.com/Collegebasketball and http://www.twitter.com/AP_Top25
___
Follow Aaron Beard on Twitter at http://www.twitter.com/aaronbeardap